Far in the distance is the stage. (Credit: Dennis E. Powell)

This One Was a Real Celebration

It started before the pandemic, but the pandemic let it take root and become the norm. We don’t often have funerals any more, at least not religious services in which we mourn the departed and beg God to welcome our dead friend or relative into the splendor of eternal Heavenly life.

Instead, the obituary now frequently ends with “A celebration of life will take place at a later date.”

About which I have a few things to say.

The first is that there has never been a more insipid, objectionable phrase than “celebration of life.” The whole idea is disgusting.

The second is that these “celebrations” frequently never get around to happening. The announcement is a placeholder, a kind of pseudotheological clearing of the throat because the survivors were too cowardly to say, “There will be no service, because none of the survivors is a believer, wishes of the deceased be damned (possibly literally).” No “celebration of life” was ever seriously planned, but the survivors felt the need to say something.

The third is that governments were quick to latch on to the pandemic as an excuse to suppress religion, which tends to be government’s natural enemy. Religion is the one thing that can cause serious people to reject the edicts of government. Closing down religion is governments’ dream come true. That was the case around the world, but especially in the United States, and funerals were an early victim.

Some might suppose that the reprehensible Donald Trump is a religious man, in that many Christian fundamentalists worshiped — and worship — him. But he isn’t and never has been. In a broadcast interview he said that no, he’d never sought God’s forgiveness, and he went on to belittle and misunderstand communion: “When I drink my little wine . . . and have my little cracker, I guess that’s a form of asking for forgiveness.” Despite the slobbering support he received from religious groups, the guy rarely showed up at church during his presidency, or before, or since.

His successor, Joe “Bugout” Biden, is worse. Biden shows up at a church on most Sundays, having found a Catholic parish that won’t deny him communion despite his habit of spending most of the week flinging down and dancing upon the core beliefs of Roman Catholicism. (In this respect he resembles more than one member of the Church’s magisterium.)

Both of them found it convenient to do what they could to tamp down religion, as a way of promoting other worship: of himself in Trump’s case and government bureaucracy in Biden’s.

So for the last couple of years you were deemed evil, unsafe, and out and out unpatriotic if you attended a funeral, never mind organized one. (I’m happy to say that my parish, along with much of the Church in general outside of urban areas, fought tooth and nail to maintain a Mass schedule and continue the sacraments including those associated with death.)

One of the pandemic’s — and government’s attempt to capitalize on it — effects was an increase in the announcements of “celebrations of life,” most of which would never come to pass. The ones that have taken place seldom had much of a religious aspect.

All that having been said, last Saturday evening I attended the memorial event for the great musician and great human J.D. Hutchison, and it was touching and good, if not especially religious.

The regional music community, large in number, mostly lefty in philosophy, and not especially adherent to organized religion, gathered in force to . . . well, to declare the pandemic over, I guess. But that’s not a trivial thing. 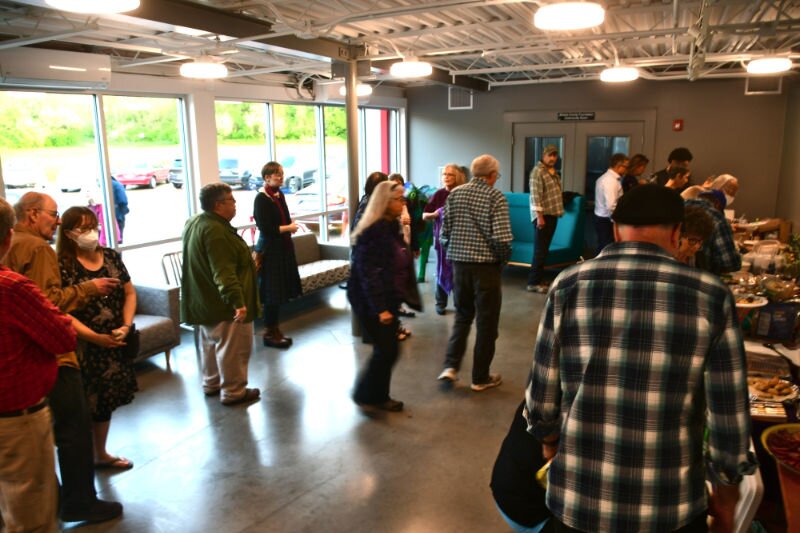 Many people brought food and many others joined them in eating it.

I saw lots of people I hadn’t seen for many, many months. Again I was forced to recognize that while our lives stopped for two years, the passage of time didn’t. Everybody is older and some are a little creakier. People whose music careers had just started taking off have now to rebuild from scratch; others have lost the energy to make the attempt. But we were all happy to see each other.

It reminded me a bit of the ending of the movie “Logan’s Run,” when everyone emerged from the dome and into the sunlight. There were performances on a small stage and the music was excellent, but people were so eager to catch up after years apart that the music was often ignored. There were a lot of people in the room where the music got played, but there were a lot of people in the lobby and a lot of people out front, the groups constantly churning and switching places, talking to each other in all three places, and behaving in a fashion that observers might have found disrespectful to the musicians.

Except that the musicians are, as J.D. himself was, accustomed to playing in loud bars (formerly loud smoky bars), where people are talking and carrying on. They weren’t and would never have been offended. I’ve seen some of them play in concert, where people are respectful, and most of them play in places where they were in some respects live jukeboxes. What I’ve learned is that while audience appreciation is important, the musicians have always played primarily because they love to play.

And it was good to see them all. I was especially moved to see J.D.’s close friend Mimi Hart and her fellow “Local Girls” bandmate Brenda Catania sing J.D.’s well known “Ready On The Firing Line,” in part because they always sound great and in part because it invoked J.D.’s voice, with its suggestion of the “high, lonesome,” sound that is hard to describe but easy to recognize. A lot of people played, some I regularly saw long ago but rarely see anymore, even before the pandemic. 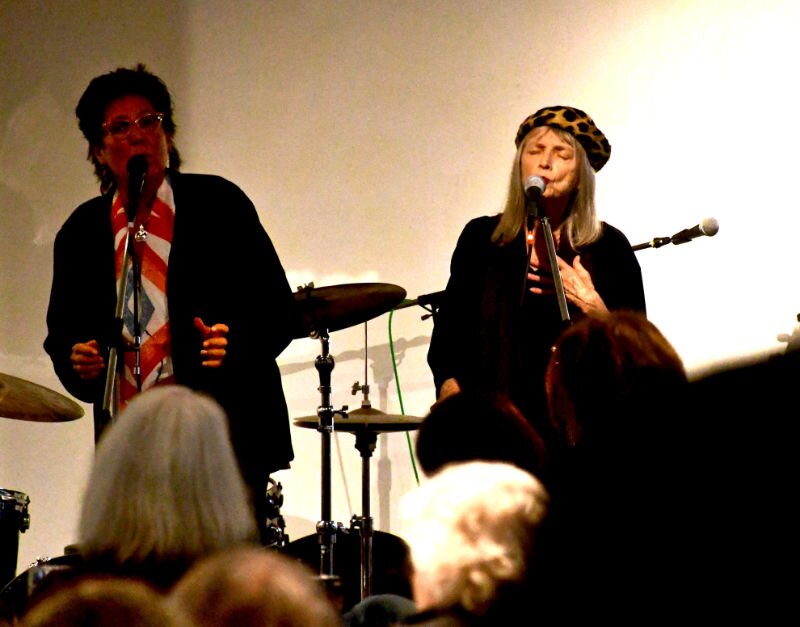 Tim Peacock was there, which was no surprise. He runs Stuart’s Opera House, a landmark venue in Nelsonville, and the tremendous Nelsonville Music Festival, a four-day event that’s returning after a couple of years off due to you-know-what. He said he’s been really busy — in 17 years I’ve never known him not to be really busy — with preparations of a new site for this year’s festival. He talked about having gotten some more property adjacent to his house, the hellish specter of the dreaded autumn olive plants, and so on. I had time to catch up a little with Rusty Smith, the voice of WOUB Radio — I’m not joking; on the A.M. side he seems to be on 24 hours a day and he spends a lot of time on some excellent F.M. shows as well. (I once mentioned in a column a recording I loved of Herdman, Hills & Mangsen singing "More Wood," and he dropped a quick email saying that there’s actually an even better version. He knows the material!) 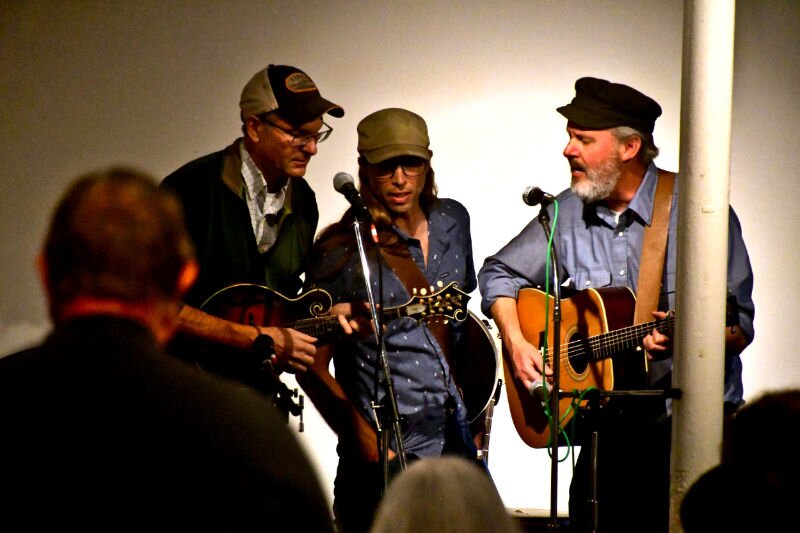 The evening was filled with familiar faces from the local music scene. (Credit: Dennis E. Powell)

Frank McDermott was there, of course. He owns Blue Eagle Music, the finest and friendliest music store I’ve ever seen; if there’s a musical instrument that Frank can’t play, I’ve not heard of it. J.D., always larger than life, used to hold court sometimes at Blue Eagle. The last time I saw him, in fact, he and Frank were sitting on the bench in front of the store, talking and laughing. They were part of a group you’d sometimes see having breakfast at The Casa, as it’s known, a restaurant unique to the town. Rambunctious students had broken the front window at Blue Eagle — again — but “did you see what I did?” A heavy iron grate with a treble clef sign at the center has been installed six inches out from the window “so they’ll bang into that instead.”

It was good to see John Borchard, another great musician who has played all over the place, but notably with J.D., Mimi, and the gang as part of “Realbilly Jive.” I recorded an interview years ago with John’s father, the artist Robert Borchard, and made a CD of it which I carried around year after year to give to John when I saw him, which I used to do all the time. Of course, I didn’t have it with me last Saturday. 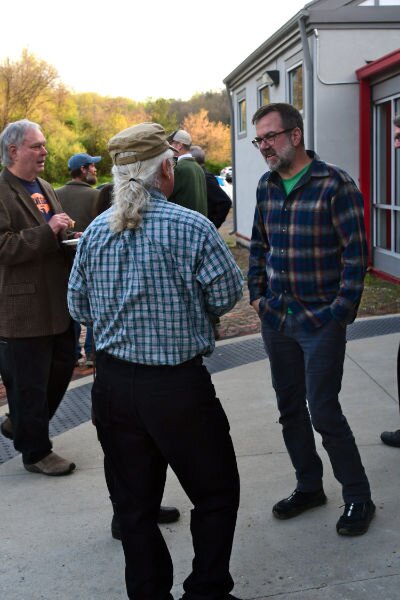 A big part of the event was local music people catching up. (Credit: Dennis E. Powell)

And there were so many others, too many to list by name.

Part way through Saturday night’s memorial, which hadn’t seemed to be a formal event about J.D., I realized I’d been looking at it in the wrong way. It was the kind of thing you’d attend and find J.D. there. It was all people you’d find where you’d find him, doing what they’d done all those times when you’d say, “Good to see you — I need to go over and talk with J.D. about something.”

Its effects, for me, extended beyond Saturday. Sunday afternoon I got to thinking about learning the banjo part for “Chiisana Boukensha,” a lovely little song, which led me to think of a conversation I had with J.D. probably a decade ago, when I’d gotten somewhere a Vega Whyte Laydie pot (from 1960, not one of the hundred-year-old, $10,000 ones) and hoped to come up with a Seeger-style long neck for it, a problem complicated by my being left-handed. I now went up to the room consigned to storage of instruments and parts and found the thing. Then I went to the computer and ordered up (from Taiwan — I’m not going to whittle one by hand) an overly gaudy left-handed long neck for the Vega pot (the part of a banjo that isn’t the neck). I already had most of the rest of the parts. It will be a heap of work, but in a few weeks I’ll have stretched a proper calfskin head to replace the plastic monstrosity there now, installed good nickel-plated geared tuners, fitted the neck to the pot, and it’ll be a proper banjo once again. (On which I still won’t be able to play the banjo part to Chiisana Boukensha.) So six months after his death, almost to the day, J.D. Hutchison will have teased me into building yet another banjo.

Which I’ll document here in excruciating detail when it’s all done a few weeks from now. So you have that to look forward to (or dread, your choice).

And my getting kicked into gear to do it will be my own little celebration of J.D.’s life. And the end of the pandemic.

Re: This One Was a Real Celebration

Now that’s a celebration! Thanks for sharing, looks like a blast.