With strings, it'll be a banjo. For now, it's a small drum on a stick.

For Want of a Nail

It wasn’t until yesterday that I realized that the electric bass guitar is an instrument designed so that music-ish sounds can be made by creatures who lack opposable thumbs.

The reverie that led to this epiphany came from my own annoying thumb issues. My family has unusually loose joints, which allows for amusing party tricks but also renders our joints especially vulnerable to injury. It’s not a crippling condition, but it’s sometimes a painful one, and in my case at least it most frequently manifests in the bottom thumb joint, which seems to be moving, slowly but unrelentingly, toward my wrists.

The solution is just to work through it and learn to ignore the pain. There is said to be surgery for the condition, but there is not said to be effective surgery for it. (Therapeutic efficacy being less and less the goal of surgery, anyway; the idea now is to keep the operating rooms and diagnostic equipment busy and corporate hospitals out of the red. When I see the name of a hospital administrator with “M.D.” after his name, I instantly know two things are likely: He’s not a very good doctor and he’s not a very good administrator.)

The latest exacerbation of phalangelical discomfort is the result of my porch banjo project. Cranking down the tension hooks on a banjo until they’re really, really tight, over and over, would jeopardize the competence of even the healthiest thumb joints. Yes, there are sockets for electric screwdrivers that do the same thing as the old banjo key, but there are also CDs of better banjo players than I’ll ever be, if convenience is the goal. You don’t build a banjo so you can listen to banjo music. You build it so you can make banjo music.

Which requires the use of one’s thumbs.

My first banjo was a four-string Harmony instrument when I was pretty young. My first and last formal banjo lesson came a week later. The lesson was, ahem, conducted upstairs at Shaw & Sons music store in Columbia, Missouri. The instructor was the great Lee Ruth. His hair was still red and he had no beard. Times and people change. And I was told to change — my banjo. Lee taught me C, G, and F chords and instructed me to return next week with a proper five-string banjo. I couldn’t afford one of those, even if I could have found a left-handed one. We split the difference and next week I didn’t return at all.

It wasn’t until many years later that, flush with cash from a book advance, I finally got a left-handed, five-string banjo. My research was faulty, and I accepted what the local music store in White Plains, New York suggested. A couple weeks and $1300 later I had a bright new left-handed Deering Sierra five-string banjo. I hated it. I still have it and I still hate it. For a start, it’s a resonator banjo, popular for the style of music played by the cowboy-hats-and-boots and embroidered-shirt types. Second, it contained the supposedly great bell bronze Deering tone ring, so it seemed to weigh about as much as a small-block Chevy engine. (If I had gotten the open-back version with the dense wood John Hartford tone ring, actually for less money, I would certainly have been happier.) I don’t blame the music store or Deering, because they couldn’t have known what I wanted when I didn’t know what I wanted. That banjo is upstairs in its case. I think it still has its 30-year-old original strings. 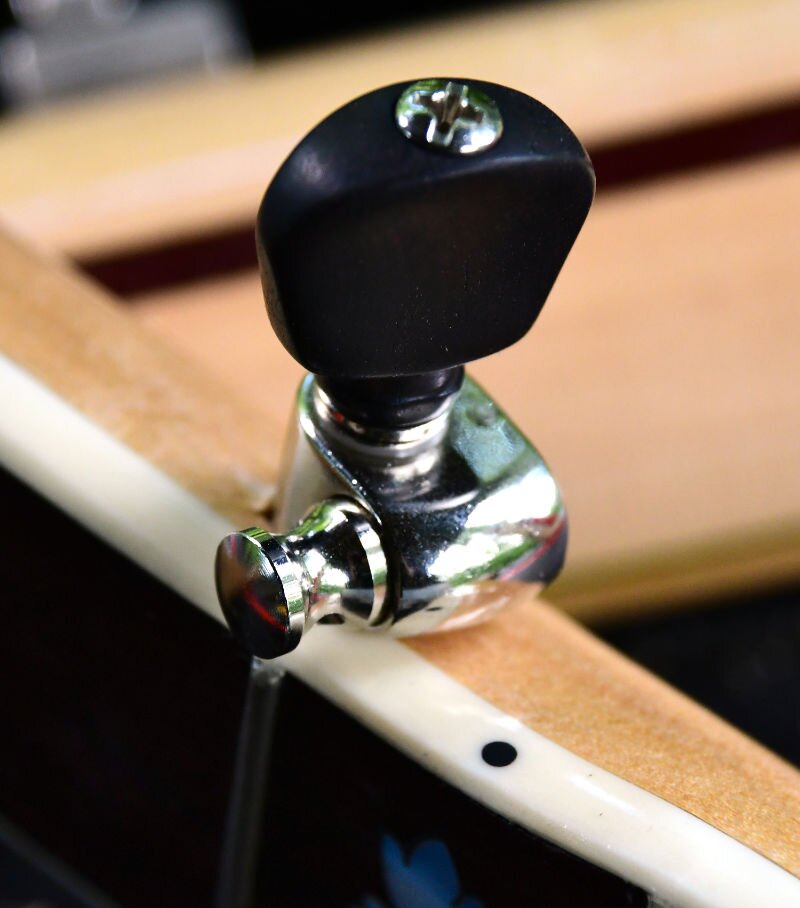 The fifth string tuning machine installed, a third of the way down the neck. (Credit: Dennis E. Powell)

Since then I’ve messed around with lots of banjos, some five-string instruments put together for others and a lot of wonderful old four-string tenor and plectrum banjos for me. But I never had the banjo I wanted, the one Lee Ruth told me to get a long time ago. Hence, the five-string porch banjo project I began to describe last week. Funny thing is, at that lone lesson he advised me to get a copy of “How to Play the 5-string Banjo” by Pete Seeger. Which I did (the book, not the record). If I’d looked at the cover more closely (and in the mirror), I’d have seen the banjo I sought, way back then.

Last week I talked about stretching a proper calfskin head on the pot of my new project, based on a 1962 Vega Ranger banjo. With mixed emotions I now report that I have pulled that head off the instrument because I couldn’t get it to sound as I wanted. I thought up a possible solution and went back at it but a few hours in I remembered that the goal was a finished banjo, not hours of banjocraft experimentation. So I pulled that head and set it aside. Looking around upstairs I found, in the discarded plastic banjo head pile, something that was at least amusing: a clear banjo head that seemed to fit the pot. Though not pristine as to tradition, it would at least be quirky and fun, and I’d worried that this instrument assembled from scraps and parts would be too quirky anyway, so why not go at it full tilt? I hate plastic banjo heads, but this one at least has flair.

Once installed and tightened to pitch, the clear head was just about invisible. Cool.

Time now to think about the neck. I could have had a neck made here for ~$1000, and it would have been perfect. But no, I ordered a $150 specimen from Taiwan on eBay. It had the advantage of already being extra long, two extra frets long, an innovation that Seeger himself had more or less invented.

It arrived sooner than I expected. It looked to have a slight twist to it — uhoh — but was otherwise sound. I’d hoped to find a plain one, with no inlays other than fret-marker dots, but nothing like that was available. Though I opted for the least-inlaid version, even it was festooned with abalone such that it seems fit for a New Orleans house of ill repute. 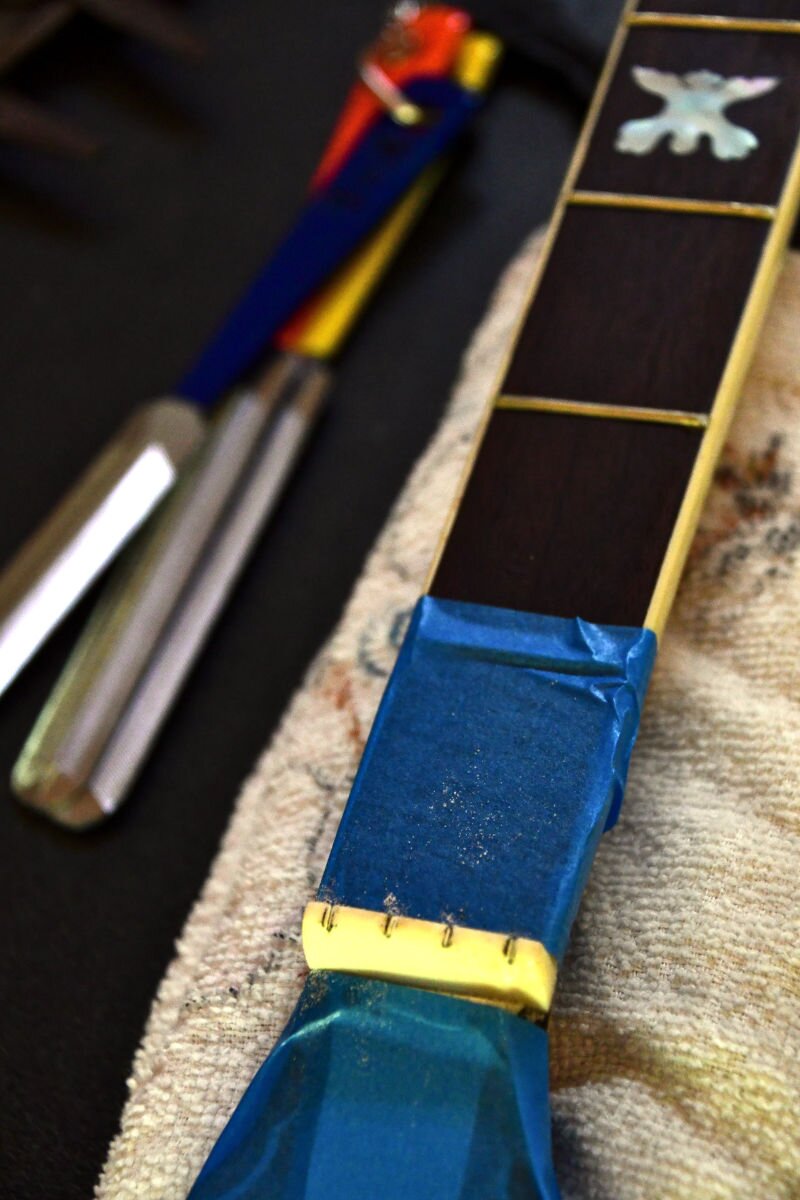 It had no hole for the fifth-string tuning machine, and I’d never drilled one of those. It was not especially fitted for the pot, which is understandable, there being no standard in that regard. I’d have to fit it myself and set up the coordinator rods. Except for the Deering upstairs, I’ve never had a banjo with co-rods and wasn’t clear how they were best fitted. I am accustomed to banjos that have dowel sticks. That kind of alchemy is familiar to me. Strangely, it somehow all worked, and the holes I had to fill with plugs because the co-rod screw holes were just a tiny bit too high are where they can’t be seen without taking the instrument apart. Here’s a tip: never drill a hole in a piece of important wood unless you have on hand a wooden dowel the diameter of the hole, to plug it if it ends up in the wrong place.

Getting it just-so was fiddly, and it was hot and humid so anger and frustration lurked nearby. They never got their grip on me, though. I was able to cut nice slots for the strings in the bone nut, the thing that rides herd on the strings between tuning machines and fretboard. The tuning machines installed uneventfully, but I’ve done that hundreds of times. The tailpiece, which is where the strings are attached at the other end of the instrument, was a snap. I would have preferred an Oettinger tailpiece, because they’re unquestionably the best (though they’re vulnerable to mishap when employed by morons). But even a reproduction Oettinger would have cost me $250 and taken weeks to arrive, outside my budget and patience, respectively. So an old-style Waverly tailpiece will do.

I slotted the bone saddle of a neat-looking ebony bridge. All that remained was to string it up, so I could double-check the spacing for the fifth-string pip. Here’s how I described in an email to friends what happened next:

I opened this nice new package of Martin Vega strings, and the damned things are TOO SHORT. I went to town Friday to get them. It never occurred to me, as it has never occurred to anyone, that they would be too short. This neck is ~3.5 inches longer than standard. I’ve never encountered a banjo string that wasn’t at least a foot too long. On this set, the third string stopped an inch or so from making it to the tuning peg at all!

So now I’ve had to go online and order strings from Ernie Ball, that are advertised as ‘Extra Long,’ and that won’t be here until Saturday.

I’ve never heard of such a thing. Banjo strings not long enough. 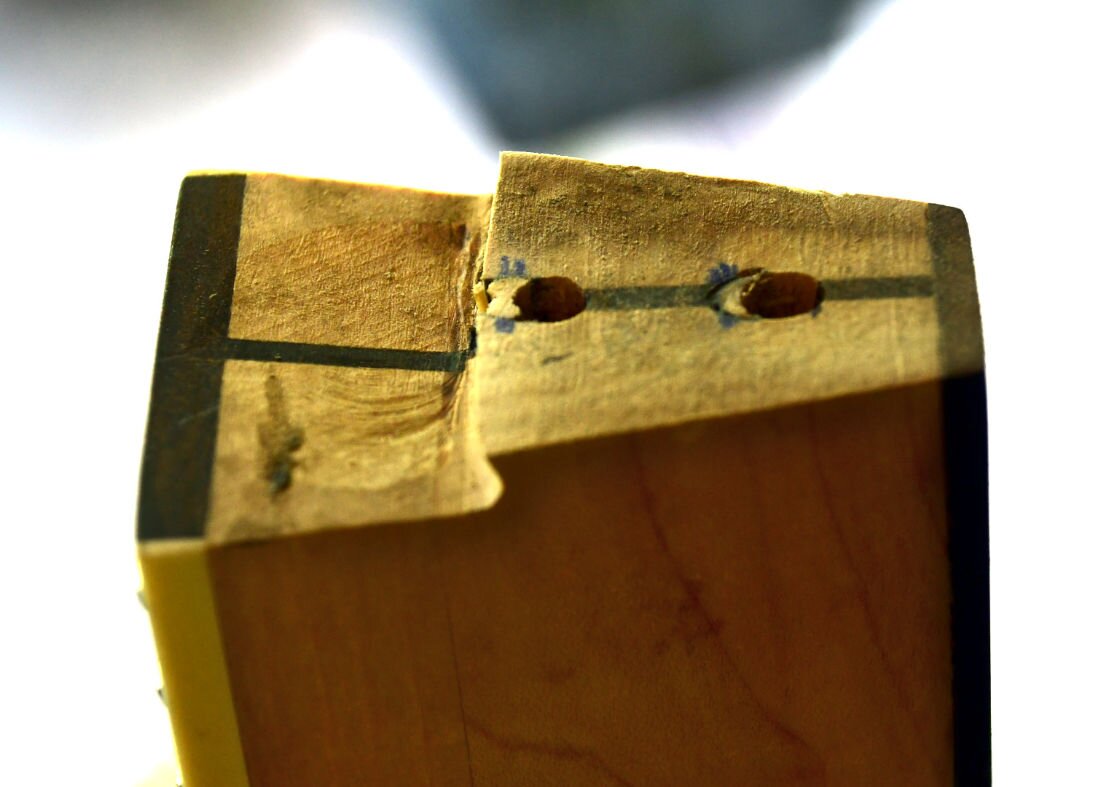 The holes to screw the neck to the coordinator rods and therefore the pot. If you look closely, you’ll see that they have been plugged and moved down a sixteenth of an inch. (Credit: Dennis E. Powell)

I’d hoped to show you the completed instrument this week, but we’ll have to settle for the nearly finished version. It’s nearly four feet long, giving it the air of something meant to be played while sitting cross-legged in an ashram. Without strings, it’s a small drum on a stick.

And due to the lack of strings, no one knows yet how it sounds. 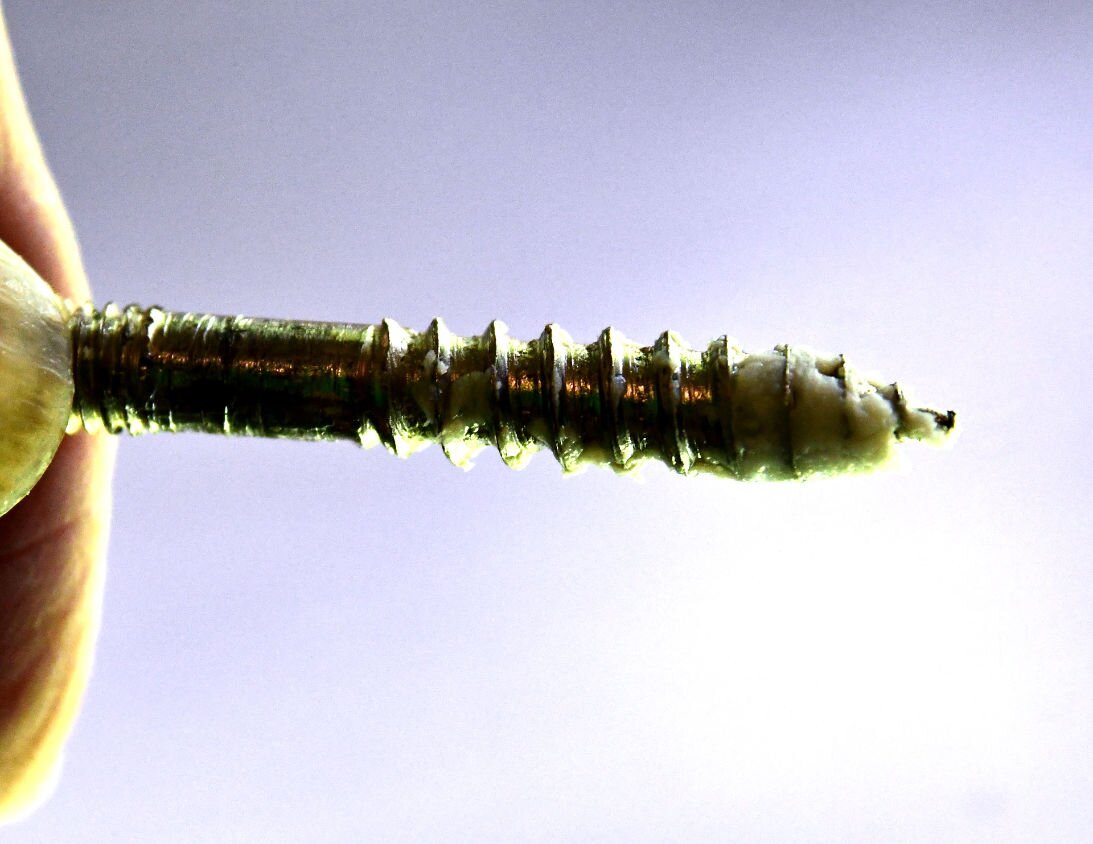 The woodscrew part of the bolt that attaches the neck to a coordinator rod. For best results when screwing into wood, scrape the threads across a bar of Ivory soap — it will make screwing them in so much easier and later it will help the wood expand around the threads for a more secure fit. (Credit: Dennis E. Powell)

Yet I have every confidence it will all work out. Maybe I could even take it on the road, playing for adoring audiences world wide. I’ve even considered stage names, though looking at tradition I find I’m not qualified. Consider: Blind Teddy Darby, Blind Roosevelt Graves (no Blind Teddy Roosevelt, though), Blind Boy Fuller, Blind Willie Johnson, Blind Willie McTell, Blind Blake, Blind Lemon Jefferson . . . the list goes on. (Why were so many American musicians blind? When you’re blind, music is one of the few ways open to those who would make a living.) I lack that requirement.

What do you think of “Slightly Astigmatic Dennis Powell”? Has a ring to it, right?

Which, anyway, presupposes that my thumbs hold up. Otherwise, I’d have to play the bass and nobody much cares what a bass player is called.