The corner of my bedroom ceiling one day a few years ago. This was a few hours after I'd vacuumed up the assembled bugs fof the second time that day. Thanks, USDA!

Spring is here — actually, in a little over a month it will be summer — and welcome as it is, the season is accompanied by some annoyances.

There is pollen. With spring rains come mold spores. I cough and sneeze more in the spring than I ever do during the winter, this COVID-modified winter included. There is an abundance of weeds and introduced more-than weeds, such as the hellish autumn olive trees and the damnable multiflora roses, both of which originated in Asia and came to us courtesy of the U.S. Government, which encouraged their widespread planting in hope that they’d reduce soil erosion. Now they’re everywhere and there is no stopping their proliferation (the plants, not the government, though come to think of it that’s true, too).

Then there are the bugs, two in particular, neither native to these shores. First among these is the Asian ladybug, which has pretty much eradicated the native ladybug and which comes with attributes far less desirable than the native version famous through childhood poetry. These smell bad, appear in enormous numbers, and love to invade our houses. Oh, and they bite. It should come as no surprise that these were turned loose here, on purpose, by the U.S. Government.

When I moved here 17 years ago, the house inspection report noted that there was an abundance of ladybugs. This did not worry me, because in the agricultural region where I grew up ladybugs were much loved. Farmers would actually purchase the native variety (the only kind we’d ever heard of) by the thousands and release them in their fields. If I had a lot of ladybugs, I thought, I would live in nicer surroundings than I’d experience without them. But I thought that these were nice, normal, native creatures, not the coarse, unpleasant Asian variety.

That gap in my knowledge would soon change.

As awful as they are, the ladybugs (which, as you probably know, are beetles) are not, except for their numbers, the worst of it. That distinction belongs to a miserable thing called the marmorated stink bug. It was not brought here and turned loose by the U.S. Government, which fact I think is true only because the government didn’t think of it. This bug, you’ll probably have guessed, is native to Asia. It apparently arrived via shipping container a couple of decades ago, and it found America to its liking. 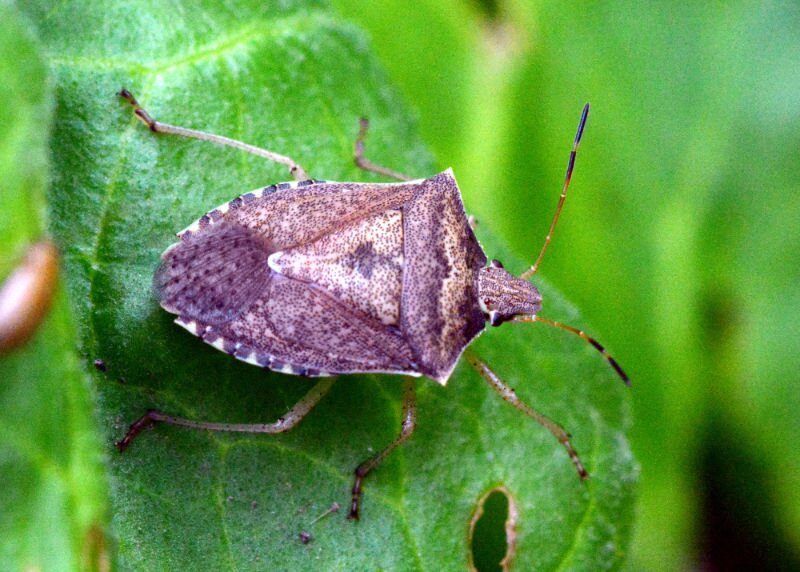 Here’s a marmorated stink bug. They are half to three-quarters inch long.

The marmorated stink bug is a true bug, which is to say its wings, folded on its back, aren’t covered by a shell. Oh, and their mouthpart is a long, sharp tube, like a hypodermic needle, in which it extracts the precious fluids of fruits, vegetables, and animals. (Not all true bugs eat all of these things.)

True bugs include a whole bunch of harmless, even moderately beneficial species as well as many varieties that are really bad customers. The group includes assassin bugs, which suck the juices out of other bugs. Most notorious is the wheel bug, a large true bug that is distinguished by what looks like part of a cog wheel on its back. Its bite is said to be the most painful bite or sting of any insect. It also includes “kissing bugs.”

WARNING: Do not read the following paragraph if you’re squeamish, prone to nightmares, or suffer from insomnia.

Kissing bugs live on blood. They land on their victims — dogs, wild animals, people — and sink their proboscis into the victim’s flesh, then suck blood for a while. Unlike the wheel bug, their bite is usually painless. As or after they feed they poop. This is unsavory but would be generally harmless except for the unhappy fact that they carry a parasite, Trypanosoma cruzi. It spreads via kissing-bug poop. Oh, but there’s more! Kissing bugs are nocturnal. They bite at night, when their victims are asleep. They get their common name, “kissing bugs,” because they seek out places where the skin is thin and the blood supply is rich and accessible, typically though not always the lips. The bite doesn’t transmit the parasite, which gets into one’s system when the still-asleep victim scratches the now-itchy bite and rubs the bug poop into the wound. This can result in Chagas disease, which most victims don’t even know they have, at least not at first. Over time, it attacks the digestive system and heart. It can kill you, and once it has gotten noticeable it’s too late for treatment. It also affects dogs and other pets. Though primarily a tropical problem, kissing bugs have invaded the U.S. There are a dozen species of them here. The surprising part is that they didn’t originate in Asia and they were not introduced here by the government, whose bloodsucking is of the metaphorical variety.

Back now to the marmorated stink bug. It attacks fruits and vegetables. If that were not bad enough, it likes to live indoors. A real success story, it has taken over large parts of the country in just a couple of decades. It gets the “stink” part of its name because when annoyed it releases a strong, foul-smelling liquid (as do Asian ladybugs, by the way). It has nothing to recommend it (except that it isn’t a wheelbug or a kissing bug).

It has no natural predators here, though eight years ago I photographed tiny parasitic wasps taking care of a clutch of marmorated stink bug eggs. These show promise in controlling them, as long as the government doesn’t get involved.

Stinkbug eggs, day 1, are at left, being inspected by a wasp about 1/16 long. By day 2, center, another tiny wasp has joined in and some of the eggs have darkened, indicating the presence of the parasitoid wasp larvae. By day 5, right, things have gotten worse, with all but two of the eggs occupied by the wasps. The egg clutch is less than a quarter inch across.

Unwilling to share my home with Asian ladybugs and marmorated stinkbugs (and, when you get right down to it, bugs of pretty much any sort), I spent years looking for a way to drive them to extinction hereabouts. The results were at best mixed. I have a small vacuum cleaner with a long snout; its sole purpose is to suck up these guys when I find them. It’s satisfying but mostly ineffective against the arthropodical invasion. 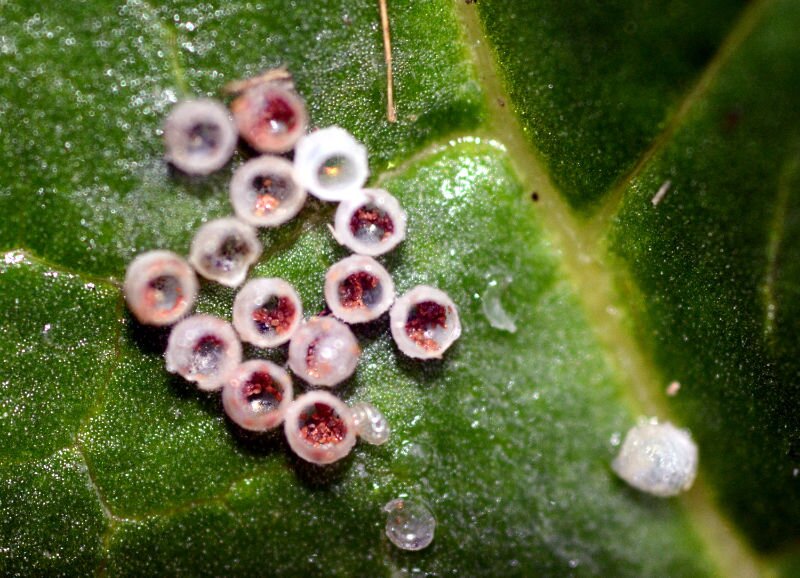 Pretty soon, the baby wasps have hatched from what used to be stink bug eggs.

It was Ronald Reagan who provided the solution. If you’re old enough you might remember that in the mid-1960s he hosted a television show called “Death Valley Days,” which was sponsored by 20 Mule Team Borax (the mineral borax was and is mined in Death Valley and other desert areas in California and Nevada and hauled to market on wagons pulled by mules). It’s a useful thing in many applications, commonly as a laundry additive that does what OxiClean did before Billy Mays came along.

Borax has long been known as an effective way to get rid of roaches and ants: dissolve some with an equal amount of sugar in some water, sop it up with cotton, and leave it on a piece of cardboard or something where the insects appear. It’s really pleasing to watch a line of ants cover the cotton and then go back home — it a day or two, there are no more ants. They don’t recognize that it will kill them, so they scoop it up along with the sugar and carry it back to the colony and it kills the ants there, too. I’ve come to sprinkle a little borax behind counters and such. It has reduced the population of indoor bugs around here.

It does this by eroding insects’ exoskeletons and suffocating them. Seemed to me it ought to work on other insect pests. The trick was finding a way to deliver it to them.

My experimentation began year before last, when I dissolved as much borax as the water could hold — to the point of saturation — in some water, along with a bit of a popular detergent advertised as being good for cleaning ducks and possibly dishes, too, and put it all into a spray bottle. After dark — wasp nests must always be dealt with after dark — I used my spray bottle to soak a large, heavily populated, and troublesome paper wasp nest out on the back porch. It worked — within a day the wasps were gone. The nest had always returned, year after year, so last year I soaked the area where it always got built, before the wasps arrived. They took their business elsewhere. I think that the detergent worked as a wetting agent, keeping the mixture from beading and instead providing even, total, long-lasting coverage and helping it to soak in.

The ladybugs and stink bugs tend to congregate on the warm, western side of the house on spring and autumn afternoons. I got a cheap carwash wand — a garden hose nozzle with a bottle attached to inject detergent into the flow — and filled the bottle with my fiendish concoction. One warm afternoon last fall, when the house was covered with the insects, I hooked up my rig and cut loose, soaking that side of the house.

It worked. It killed the ones that were there and those who came along later.

The experiment was effective enough that I’ve now gotten a soap injector bottle for the pressure washer. This isn’t essential, but it makes it quicker and easier to cover that whole side of the house and, I think, finds crevices and such that the hose-with-wand couldn’t quite reach.

The project was effective but not absolutely so. Bugs come in on the three other sides of the house, down the chimney, and by other sneaky routes. Still, the reduction was dramatic: where once I’d vacuum up dozens of stink bugs and hundreds of ladybugs, sometimes several times in a day, now it’s one or two stinkbugs and maybe a dozen ladybugs. I’d rather have none, but I can live with it.

So I recommend my method of bad bug control. Why, then, would I call it secret? Because it kills good bugs, too, for one thing. While borax is fairly harmless — think of it as being like laundry detergent or, say, table salt in its toxicity — if it’s overused it can cause real problems. If it were popularized there would surely be people who think that if a little is good then a lot is better. Small amounts of borax, for instance, are good for plants, while large amounts will kill them. So should it come to pass that people were going hog wild spraying borax solution all over the place, pretty soon the government would come round with regulations (and, who knows, maybe special lines of borax-resistant invasive species).

As with everything, moderation is critical. It’s the dose that makes the poison.

Re: My Secret Insecticide