This is Only the Beginning

Anyone familiar with the history of the last 100 years or so should be terrified, because they’ll remember that this is how it began last time. We’re not far from saying “if we’d only acted back then.” Right now is the “back then” we’ll be talking about.

Vladimir Putin, the megalomaniacal former-KGB officer who now runs Russia, made it clear in his long and angry speech on Monday: He intends to restore the former Russian empire part and parcel. And he has begun by phonying up what he claims is a defensible cause, the “rescue” of Russian sympathizers in eastern Ukraine.

There is tragic precedent for all this.

Let’s look back to 1938. Northern Czechoslovakia, a region called the Sudetenland, was populated largely by ethnic Germans. Therefore, said Adolf Hitler, the place ought to belong to Germany. Sensing weakness, he figured that the West would do little or nothing to stop his seizure of the territory. He was right. Western powers, meeting in Munich at the end of September 1938, granted the Sudetenland to Germany in exchange for a German pledge of peace. We know how that turned out.

If only we had stopped Germany there and then.

Of course, there was a group in America carrying the message “of what interest is the Sudetenland to us?” not unlike the current Lord Haw Haw wannabe, Tucker Carlson, whom many of us will remember as having been slapped down by the late, lamented Rush Limbaugh as “Chatsworth Armstrong Jr.,” and who argues that Ukraine is of no real concern to the U.S.

The U.S. has stood as something of a guarantor of Ukranian independence, except for times when there is a president named Obama or Biden. The former did nothing useful when in 2014 Putin’s soldiers invaded parts of Ukraine, including its seizure of Crimea. The latter said Jan. 19 that he would be angry indeed if Russia invaded Ukraine, unless it were a “minor incursion.” If you had the windows open you could hear the gasps from the world’s diplomats and military leaders. Biden was being like a defense lawyer arguing it wasn’t rape due to the minimal penetration (which is something Bill Clinton would say). The senile dimwit Biden — he hasn’t always been senile — thus proved yet again that he and we would be better off if he devoted full time to improving his shuffleboard skills. The White House tried to take it back the next day. But this week has demonstrated Biden meant what he said. And who can be surprised? A president who has surrendered, as happened last summer, to a bunch of fanatical goatherds is not likely to stand up to a despot who has a modern army — something that wouldn’t have been lost on Putin, and wasn’t. A president whose promises are betrayed before they’ve stopped reverberating around the room is not to be respected, let alone feared. Biden’s weakness wasn’t just sensed, it was bottled and distributed. 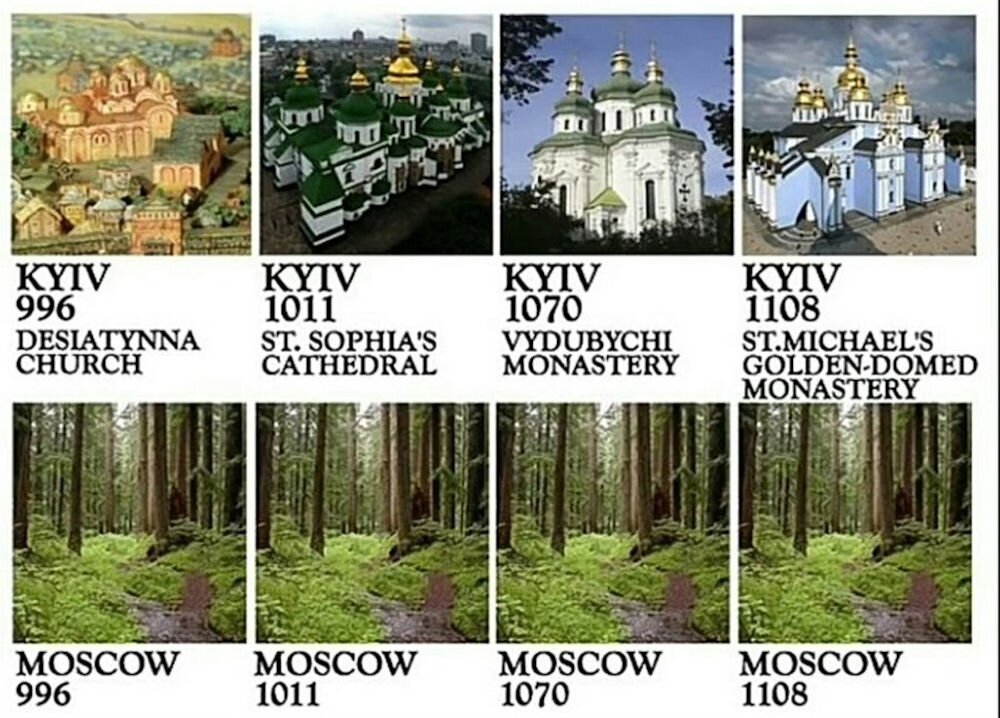 Having fled to Poland, the U.S. ambassadorial delegation to Ukraine thought it prudent to issue a meme of Ukraine compared to Russia. They failed to consider that Putin’s point is in part that Ukraine is the cradle of Russia. Russians responded by asking for pictures of Washington D.C in the years mentioned. (Credit: U.S. Department of State)

To be fair, Russian U.N. ambassador Anatoly Antonov was saying as late as the weekend that Russia respected recognized Ukranian borders — until two days later it didn’t anymore. That came after Putin called his own “security council” together and browbeat his hesitant intelligence chief into going along with the invasion plan, which is clearly Putin’s alone. It is something to behold. One wonders how many in the room wished during the meeting that they had brought a pistol. Even a dinky PSM of the sort issued to generals and the like can be effective at short range.

Putin, who considers re-establishing the Russian empire his historic mission, lies on purpose. Biden says anything that pops into what’s left of his never-very-intelligent mind. This is okay when you’re sitting out on the porch at the rest home, around the table having your afternoon Bosco and a cookie. It is not okay if you’re the putative leader of the free world.

(Something weird about Putin recently, too: He seems terrified of being in close proximity to anyone. His meetings with foreign officials have had them at opposite ends of a very long table, while in his meeting with the Russian officials he stood many feet away from them. Maybe he’s afraid of Covid-19 — the “Sputnik V” vaccine is less effective than even the western vaccines. In any case, he’s strangely keeping his distance. Maybe the PSM has a shorter range than we thought.)

But, hey, Kamala is on the job! From last week’s Munich conference (not to be confused, except in effect, with the 1938 one), the vice president set the enemies of peace on their heels (and scratching their heads) with this brave pronouncement: “Within the context then of the fact that that window is still opening, although open, although it is absolutely narrowing, but within the context of a diplomatic path still being open.” (I did not make up this quote. No one would. No one could.) Perhaps her cunning plan was to confuse Russia into submission. If so, it failed.

Monday night I watched the emergency meeting of the U.N. Security Council (on Sky News — how nice it would be if there were an American all-news channel) and was moved by some of the speeches (though not those of India, China, or of course Russia). For a moment it almost seemed as if the world meant business.

Yesterday, Bugout Joe delivered an address to the nation and announced largely toothless sanctions against Russia, considerably less stringent than those imposed last week by Canadian strongboy Justin Trudeau on his own country’s citizens. He said that if Putin doesn’t learn the lesson, more will come. Perhaps it will rise to the point where Biden unfriends him on Facebook — oops, “meta” — and could, taken to the ultimate extreme, include unfollowing and even blocking him on Twitter. This is what happens when a non-serious man is in a position that demands a serious (and lucid) one.

There is concern that the group of nations united in opposition to Putin’s madness might crumble if Putin shuts off the fuel supply from Russia to Europe, which gets more than a third of its natural gas from Russia. Hell, even we import fuel from Russia! We could have picked up the slack, but under the lash of the leftmost, let’s-all-live-in-mud-huts portion of the Democratic Party, Biden has done all he can to discourage U.S. energy production. Much has been made of Germany saying, which Biden proudly repeated, that the Nord Stream 2 pipeline will not currently be approved. He neglected to mention that part of the reason Putin feels emboldened to invade Ukraine is that Biden himself lifted sanctions that had halted that gas pipeline from Russia to Germany, because Donald Trump (in Putin’s pocket, according to those unfamiliar with the notion of evidence) had imposed those sanctions and all Trump doings required undoing. Biden also failed to point out that the approval wouldn’t have taken place until late this summer anyway.

It’s probably not deliberate — though maybe it is — but if Biden had set out with the goal of destroying the United States and Western democracy, none of his actions during his first year as president would have been much different. Now might be a good time to invoke, in Biden’s defense, Hanlon’s Razor: Never attribute to malice that which can be adequately explained by stupidity.

In his talk yesterday (more accurately, his mediocre reading of words some anonymous person wrote for him to say aloud) Biden affirmed that our sanctions against Russia, such as they are, will result in higher energy prices. (The 90-cents-per-gallon increase in the price of gasoline over the last year was Biden’s alone, no Russian help involved.) This seemed especially primed to stiffen our backs, to make us ready to abandon Ukraine as has become our habit, with Bugout Joe the man to lead us in glorious retreat.

“We have no intention of fighting Russia,” the old fellow said yesterday. “We want to send an unmistakable message, though.”