It starts when we’re young, I think, and continues through our lives.

That great new baseball glove, we’re encouraged to believe (and are eager to go along with it), will make us far better players. That new car will make us so much more attractive to the opposite sex. That new word processor will bring our writing into a whole new realm of coherence and literacy.

The last few days have given me a new opportunity to examine this phenomenon. Following my terribly bidened attempt to replace a failing television, described here last week, a couple of friendly guys in an Amazon truck showed up (out here in the woods) last Friday morning with my new TCL 55S535. They actually came three days early, having emailed me their schedule the night before.

This time the screen wasn’t smashed, though the mounting bolts in the back were torqued down so tightly that I was never able to get one of the four to come loose. This means that the new television is hanging by only three bolts. I do not expect this to be a problem, but it is a nod to TCL’s lack of quality control. Then came setting up the Roku stuff — the screen came populated with many pay-for channels that I did not and do not want, so it took a while to delete those. I put the channels that I do want in the order in which I wanted them, re-entered passwords where necessary, then dove into the settings.

Optimizing a modern flat-panel television is a lot like, and only a little less inconvenient than, optimizing a new computer monitor: the defaults are rubbish, the adjustments are obscure and ill-named, and the results are often the opposite of what you’d expect. (Example: The “sharpness” control doesn’t produce sharpness; instead, it draws lines around objects, making the picture surreal. “Vivid” means “blown out.” The white balance pretty much always needs adjustment, but finding the place to fine-tune it is an excursion through settings deep into menus whose names are counterintuitive. And so on.) When you order a new computer your mind jumps to your using it productively; you never consider that you’ll have many hours setting it up before you can do anything useful at all. Modern televisions are victims of the same phenomenon.

After a few hours that featured my rehearsing much of the vocabulary of colorful exclamations, the thing was pretty much where I wanted it and it was time to watch something, fancy that.

Talk about disappointment! Everything on the screen was now brighter and better-rendered than ever, with richer, deeper colors. But it was the same old stuff, which isn’t getting better but instead is getting worse.

Because it is the cheapest way to get some channels that are useful to me, I subscribe to the Sling streaming company. Once upon a time it allowed me to select channels to display, so I could get where I wanted to go more or less expeditiously. But recently it released a “simple, beautiful, more personalized streaming experience,” according to the unintentionally self-incriminating email the company sent me over the weekend. The new version placed the channels I want to watch far down a screen of shows that Sling wants me to watch or, worse, thinks I want to watch. There is no way of returning to the old, good interface. Ah, it gets worse. The same email informed me of what shows I most watched last year. Perhaps they thought I didn’t know which shows I watched last year. In any case, this told me that Sling keeps detailed records of my viewing habits. And we can rest assured that all these data are just too good for Sling to keep to itself. So it shares them with advertising and other data-agglomeration companies, in exchange for money. 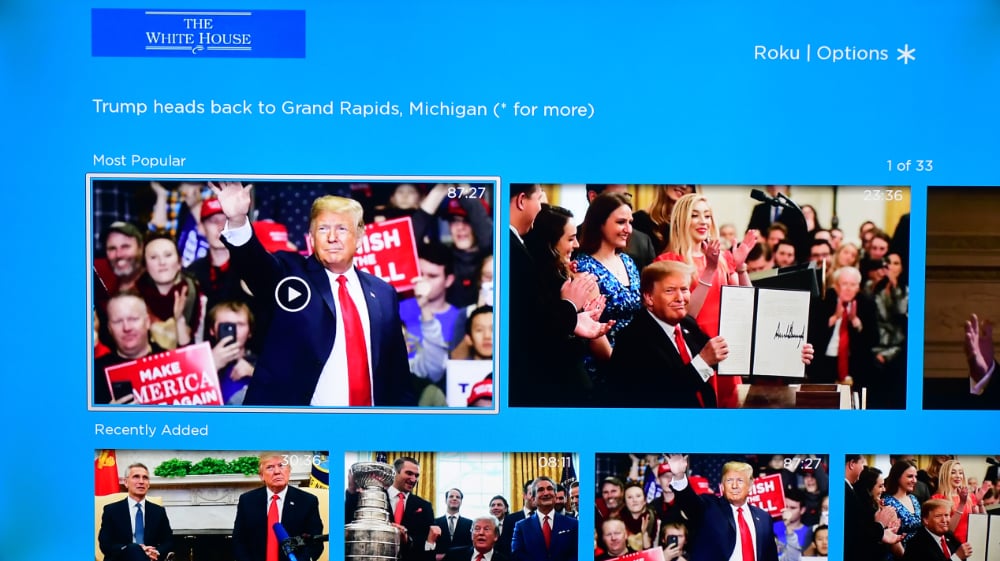 (This is true of just about every application available on smart televisions for stupid viewers, as well as the televisions themselves. Just this morning I found the setting where I can instruct the television not to make the microphone available to advertisers. What? My television has a microphone? And unless I specifically tell it otherwise, it lets advertisers and probably others listen in on my living room? Nor is it easy to route a television through a virtual private network so as to preserve at least a little bit of privacy. I hate it, and I hate that I pretty much need to do business with such outfits. Modern television viewing is the visual equivalent of doing business with every scammer who calls your telephone. You can turn off some data collection, but not all of it. The day is long overdue for a television packager that, perhaps for a few dollars more a month, agrees to collect none of your data. And, perhaps, an accessory that sends 10,000 volts at about 50 amps down the line to the computer of anyone who tries to collect your data.)

Remember when you’d choose a channel and the channel would appear on the screen? Those days are gone. I have about 40 “channels” on my television, and not a single one of them, when selected, brings me a television show. No, each brings another menu and making a choice there brings yet another menu. All this extra software, making sure the spyware is functioning and so on, takes a long time to load. Just starting the Sling application sometimes takes upwards of a full minute. And this is on a brand new, modern television. If you want to watch something that begins at a particular time, you’d best start getting to it a few minutes early.

My new television, as my old one, is a Roku TV. This means it’s not an Apple TV, nor an Android TV, nor, Heaven help us, a Google TV. As such, it’s not as rapacious as some of the others (or at least has that reputation). I considered an LG television with its WebOS operating system, because I liked that OS on the late, disastrous H-P Touchpad tablet computer, until I realized that the things I liked about it were impractical for television use.

As long as Google-is-evil has been mentioned, it is worth describing what that giant corporation, soon may it disappear, has done to YouTube. 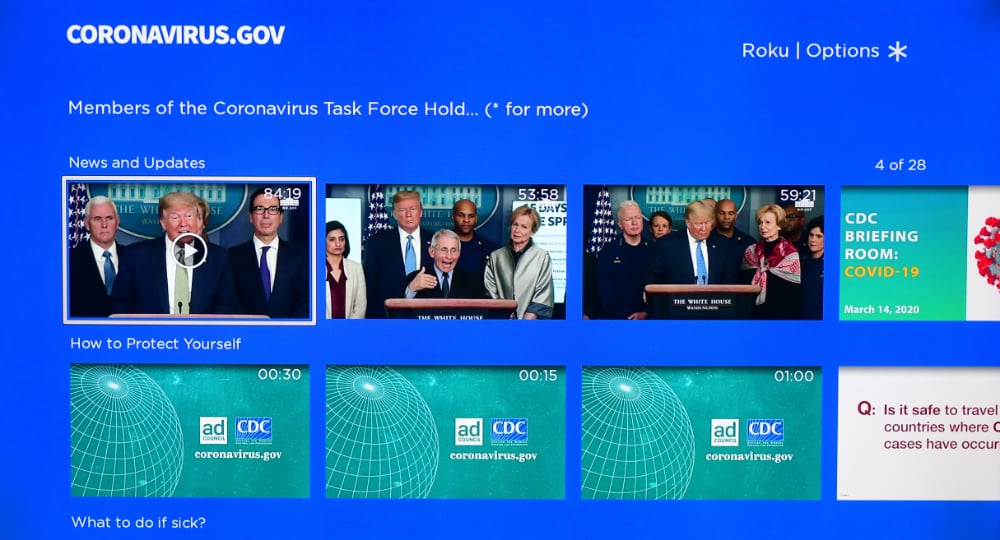 In a pandemic, you’d think the government’s coronavirus.gov channel would have gotten updated in the last year. You’d be wrong. (Credit: Dennis E. Powell)

Some of you may remember a photo website called Flickr. It was popular and good, and provided a way for photographers to display the images that had made in the way they wanted to display them. It was the internet standard photo site. Then, under new Yahoo! CEO Marissa Mayer, the whole site was redesigned and made non-serious and sprung on users, many of whom fled in horror to places like the excellent Ipernity.com. (The Flickr site still exists after being sold by Yahoo! to Verizon, then to SmugMug, not that it much matters. I mean, BlackBerry still exists, too, just not in the form that led people to love it.)

Aforementioned Google bought YouTube, back when it was to video as Flickr was to still images. This was when Google’s motto was “don’t be evil,” a motto and concept it has long since abandoned. In 2014, new YouTube CEO Susan Wojcicki began transformation of YouTube into something that anyone not subject to the frog-in-the-pot effect would find unwatchable. Google now wrings every penny it can out of the site. One now watches a five-minute musical performance on YouTube only to have it interrupted in the middle by a particularly moronic advertisement. I’ve come to keep pad and pencil near my viewing seat, so as to make a list of YouTube advertisers who annoy me (which is all of them) so I can make a special point of doing no business with any of them. Some days it seems as if half the new videos on YouTube are video uploaders (who flatter themselves by claiming to be “influencers”) complaining about YouTube.

There are alternatives, Vimeo and the relatively new and (apparently) relatively unrestricted Rumble. I wish I were not as suspicious of these as I am, but on the internet the question is always “what’s their ulterior motive?” Almost everyone has an angle, a scam they’re trying to run; a secret plan. Vimeo has been around longer even than YouTube. I hope that nine-year-old Rumble proves to be legit, but it’s guilty until proven innocent — that’s the internet today. Both the Vimeo and Rumble Roku applicatons are a little flaky and a lot unattractive, but that might change in the future, maybe even for the better. I would certainly be good to see some of the video makers I like migrate to Vimeo or Rumble, and those sites make their work easier to find.

I cannot help but think — hope springs eternal — that we’re in a transitional phase as it applies to television, and in the early stages at that. I was a DirecTV satellite subscriber for well over a decade. Then AT&T bought and ruined it, and raised prices, and two and a half years ago I switched to streaming television. It’s astonishing how much that technology has changed in just that short time. A lot of new aggregators have hit the market, most of them over-priced and limited. Some traditional broadcast networks have set up their own streaming services; I’ve been able to avoid any urge to subscribe to any of them. (As I was somehow able to avoid traveling down the dead end that 3-D television turned out to be.) 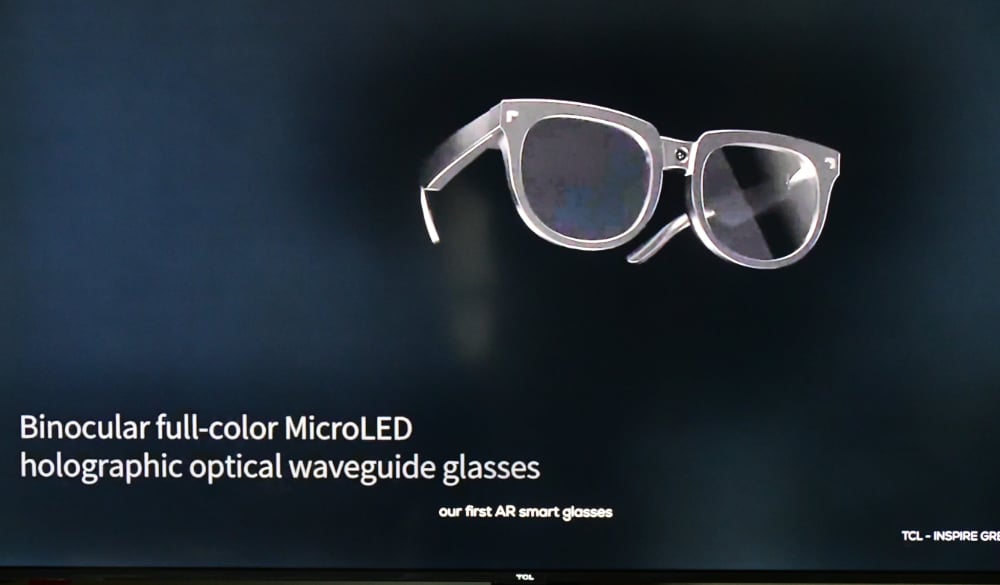 I suspect that if, say, Fox were to combine the properties it still owns into one service with news, business, weather, sports, entertainment, and maybe a revamped version of that easy-to-resist Trump-is-God-Emperor-of-the-Universe streaming site they now have, and offered it for, say, $20 a month — $25 with no data collection and no ads — it would make a lot of money. I’d be a subscriber and Sling would disappear from my television. I have no idea if they will ever do this, but they should. Some of the other networks have, though in those cases it’s the entertainment programming that has dragged the news and such along.

It’s impossible to predict the specific future of television, but there are a few things of which we can be sure: It will cost more. It will be less convenient. We’ll have even less control of our own privacy. There will be far more programming, and far less of it will be worth the bother. TCL this week announced a television nearly 10 feet across, as well as new electronic glasses that do what Google Glass purported to do as well as other, more “immersive” things: The company is apparently preparing for get-in-the-robot-Mark Zuckerberg’s Human Instrumentality Project a/k/a Meta. We can be sure they’re already at work designing Evangelions to use if that silly plan ever gets off the ground. Just kidding — I hope. And even then, the programming will probably be the same.

But it will sure be pretty, and we’ll chase the new televisions that promise to make it all better, even though they won’t.