Do people still have warm, memorable Christmas traditions? I wonder.

We used to. Here’s part of my family’s, when my family lived on our little farm in Missouri at a time that doesn’t seem as long ago as it was.

The tree, a live spruce of the Norway variety, was picked up a week before Christmas, to the day, and decorated that evening. The afternoon would be spent in stringing Christmas lights along the gutters on the front of the house, which should have taken minutes but took hours as we tracked down the lone bad bulb that prevented the others from working. The ostentatious display of more than a string or two of lights was frowned upon; those who had the audacity to put out a plastic Santa Claus or snowman, illuminated by a light bulb inside it, were seen as showoffs.

The evening’s activities were festive, because in addition to the balls and tinsel (which we called “icicles”) and lights, there were cranberries and popcorn to be strung, and the latter provided a wonderful seasonal delicacy. Stringing cranberries with a sewing needle is fairly simple, but it took skill to sew popcorn together. And as long as popcorn was being made, it was thought, might as well make popcorn balls. There are few treats better than a still-warm popcorn ball on a cold winter’s evening, especially when accompanied by hot cider with a little cinnamon. The popcorn had been salted before it was rolled into the softball-sized orbs held together by white Karo syrup that had been heated, so we were far ahead of the salted-caramel trend.

The creche my father had built, a wooden structure two feet long that resembled the shed off the back of the garage, was unpacked and populated with its porcelain Jesus, Mary, Joseph, shepherds, wise men, and animals. The figures were all wrapped in paper that had been reused so often it had the texture of flannel, and after Christmas they would be again.

Once the tree had been well and truly decorated, the room lights were turned off, though there was sometimes a fire in the fireplace, and the lights on the tree were turned on. There was oohing and aahing, and I suppose some of it was for the tree, which was always beautiful. But it was mostly a moment when we realized that despite whatever troubles may have beset our world, we were in fact a family, together, happy, warm against the winter wind and possessed of a sense that things were fundamentally right. For a moment, it did not matter what would be found under the tree a week hence.

That moment soon passed, swept away in anticipation. BB guns and bicycles and sleds were all yearned for, but it was more than that; it was an enthusiasm, a sense of excitement. It was a season of wonders, from the magical to the holy. Friends were friendlier. Talk was warmer and happier. People would unashamedly stop in stores and grow teary-eyed at a particularly moving version of a favorite Christmas song, and no one thought less of them for it. It was an emotional and sentimental time, carved out of a harsh farmland winter. There was a largeness to it that was enveloping and good.

Then came the neighborhood Christmas party. There was no liquor — drinking wasn’t a very big part of anyone’s life — and, besides, it was usually held in the recreation room of one of the country churches nearby.

There was an incident one Christmastime at one of these churches, the Little Bon Femme Baptist Church, or, to be perfectly accurate, not at the Little Bon Femme Baptist Church, that inspired grins on the faces of all who heard about it but were not directly involved. One Sunday just before Christmas, the church was to be host to a very special choir. It was called “The Prodigals,” and was made up of inmates from the state prison in Jefferson City. The driver of the prison bus had received instructions to drive up Highway 63 until he reached the sign for Little Bon Femme Road, then to turn left, drive a half mile, and there would be the church.

But unknown to the organizers of the event, the County Court had, in its wisdom, decided that although Little Bon Femme Church had seemed to be on Little Bon Femme Road for all of its 100 years of existence, such suppositions were in error — Little Bon Femme Road was in fact a completely different dirt road, a mile further north. And on the day before the prisoners’ visit, a county road crew had with uncharacteristic efficiency put the Court’s ruling into effect by moving the sign.

Came Sunday and the big green prison bus lumbered up Highway 63, found the sign, turned left, and pitched and rolled up the bumpy and pothole-infested road. After a half mile, they came to a large building at the road’s end. But instead of the expected Little Bon Femme Church, the sign said “Bearfield Tavern.” As if this weren’t bad enough, it was Sunday, so the tavern was closed. There was no telephone. Chaplain Earl Grandstaff, organizer of The Prodigals and the man in charge of the outing, paused and thought for awhile, then said hell with it (actually, he probably didn’t say exactly that, but the effect was the same) and turned around and went back to the prison. Thus were the parishioners of the Little Bon Femme Baptist Church robbed by fate and the Boone County Court of their chance to hear convicts sing Christmas carols. 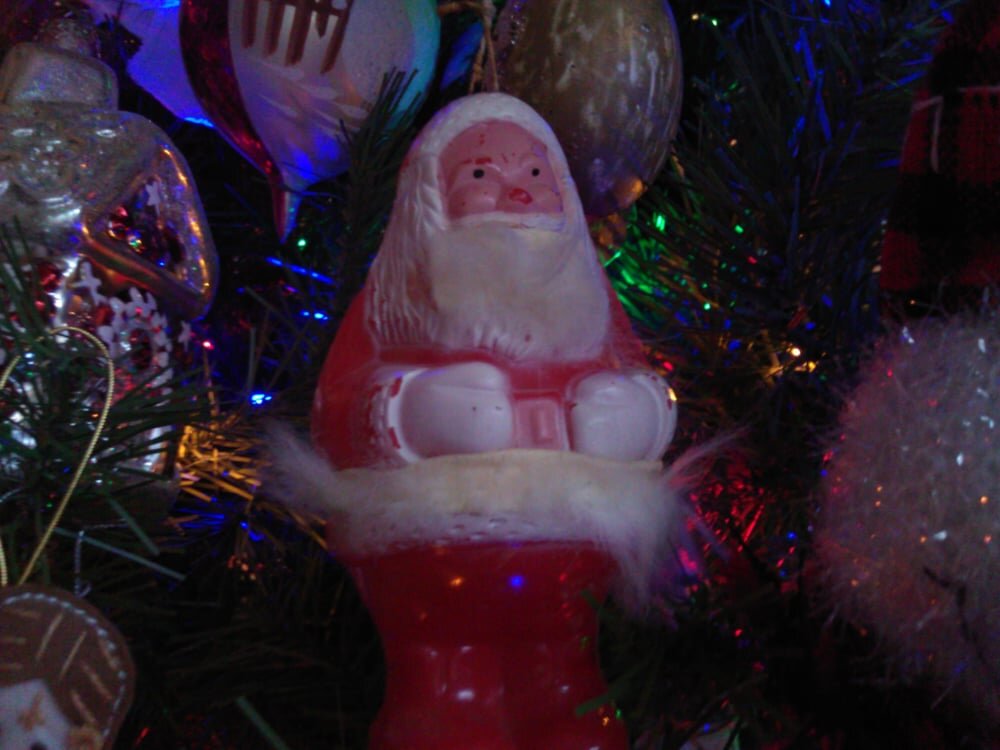 We never did anything so elaborate as to have prisoners come to sing to our neighborhood Christmas party, and we already knew where all the churches were, even if the court vandalized the signs. Everybody showed up, and always at the right place, even if the night were snowy as it sometimes was.

The food included ham and turkey — these were special; we all had beef all the time, so no one would dream of bringing it to a party — and scalloped potatoes and mashed potatoes and gravy, homegrown green beans with a little bacon to flavor them, my aunt’s unsurpassed asparagus casserole, cornbread (especially cracklin’ cornbread, which had been larded with chitterlings) and other bread, and plenty of butter, salads of various sorts, and, of course, the inevitable Jello concoctions.

The two most horrifying were the emerald-green lime Jello, shot through with slivers of carrot, and, even worse, the mixture of cottage cheese and orange Jello. I do not know who committed these crimes, but in the festive holiday spirit the perpetrator was forgiven. After the meal, which was eaten at long, school-style tables with families intermingled and the sound of laughter and pleasant chatter rattling the very windows in competition with the icy wind outside, there was a cleanup period, during which the kids would run riot until someone would claim to have heard bells. Not church bells, but the little jingly ones that are sewn on clothing and were sewn on children’s toys until it was discovered that an unattended child might choke on one. Suddenly there was a somberness to our revels, for this sound heralded the arrival of Santa Claus.

One need look no further than Santa Claus to recognize a powerful human attribute: That which one wishes to believe, one will believe. The town was thick with Santa Clauses. We had more Santas at Christmas than drunks at homecoming. And we were not stupid children. Yet it was believed that each and every one was the real, genuine Santa Claus. Some of us outgrew this, but many, apparently, merely refined it, which explains why so many people believe so many things that are in opposition to demonstrable fact: All the goofy New Age nonsense, all the situational morality nonsense, which isn’t morality at all, the ridiculous idea that when you grow up, Santa passes his mantle to the government and imbues it with the power to hand out all kinds of unearned gifts. There’s a lot of this kind of “belief” floating around in today’s world, now that morality has been cast adrift. Morality now seems to be whatever you “feel” it is, at this moment — next moment, it might be completely different, depending on what you want to do then. Pretty sad.

But little children are allowed to believe in Santa Claus if they want, and we wanted to do just that, as often as possible: The more Santas the merrier the Christmas. At our neighborhood party, the bells would grow louder, jingling like a tambourine and carrying a great distance if it were snowing. We would all rush to the vicinity of the Christmas tree, at the end of the dining hall, next to the piano, which was itself next to an ancient Coke machine that still sold six-ounce Cokes in tiny glass bottles for a nickel and hummed very loudly when the refrigeration compressor came on.

Santa-of-the-hour would burst upon the scene, ho-ho-hoing in his deepest affected baritone. From a white cotton bag he would extract and give to each child an orange — those awful, thick-skinned, unpeelable oranges that look so attractive in the bin in the store and that keep pretty much forever, but that are all but inedible. This was endured, because it would be followed by the handing out of presents, brought from home by our parents, one small present per child. The anticipation was usually excessive, for this was where one might expect to receive a new pair of gloves (one of which was likely to be lost before the night was through, but picked up by someone who would eventually see it safely home) or heavy woolen winter socks, or a muffler; the child who received an actual toy was the object of envy and the most popular kid in the place for the remainder of the evening. The rest grew sticky gnawing into the oranges in a futile attempt to extract anything worth the mess.

Then one of the grown-ups would sit at the piano, and play, and we would all sing Christmas carols, and laugh and applaud. Mr. Plyler, a preacher whose family lived in the neighborhood for a number of years, sang “Oh, Holy Night” so passionately that it was a little embarrassing. The last song, “Silent Night,” was the signal that the party had come to an end. Some of the grown-ups would stay behind to clean up the place and to chat — my father always said that my mother “won’t leave until the last dog is dead” — before they, too, left for home, filled with warmth and a sense that our neighborhood was a great place filled with people we were glad to know.

That’s part of my family’s long-ago Christmas tradition. Maybe I’ll recount more in the weeks to come, because it’s a good thing to remember.

Be well and happy.