Existence in much of Tanzania, here virtually in the shadow of Mount Kilimanjaro, is hard. It's made harder by a lack of clean water. (Credit: Nadia Mitchell)

Can You Imagine Having No Water?

Tomorrow being Thanksgiving, chances are good that most of us will in fact pause to give thanks for the many blessings that are undeservedly ours, possibly while surrounded by the aromas of rich and tasty foods. Good for you, and good for us.

Perhaps you can pause for a moment and think of the people — there are many of them — for whom a blessing denied them is one we take for granted: a glass of clear, clean water.

Nadia Mitchell is a woman who lives her religion. Many of us talk a good game but fall short when it comes to the hard work of bringing to pass the things we all know are desirable. I’m at the front of that particular line.

She’s a friend and a fellow parishioner. I’ve listened to the stories of the pilgrimages she has taken to holy sites, on holy routes. Her remarkable journey was told in some detail on a popular Catholic television program.

So it wasn’t at all surprising to learn many months ago that she planned a trip to Africa, to help teach impoverished local people how to get clean, potable water, and to help them dig the wells that would bring it to them. She had learned about a relatively quick and inexpensive way of digging wells from its inventor, Terry Waller of an organization called Water for All.

When I ran into her months later she was back from the trip and more excited about it all than ever. This shouldn’t have been surprising, either, because she’s from a long line of missionaries who lived to serve others overseas.

Early this fall she sent me and others a detailed report of the trip. It was inspiring. I’ll describe some of it, but will leave out much of importance. The best I can hope to do is give a taste. As you read what follows, maybe you can remember the thirstiest you have ever been. Add to that memory the idea of there being no water to bring relief — not just no water on your bedside table, forcing you to get up and go to the kitchen, but no water, period, and no real idea of when there will be enough to have a drink of it whenever you want. Top it off with the certainty that when you do get water it might be contaminated and possibly disease-ridden, but you’re so thirsty that you don’t care.

That’s the case in, among other places, parts of the Kilimanjaro Region of Tanzania. “Near the border, for example, people pay motorcycle drivers to bring them water in jerry cans from Kenya,” Nadia said in a comprehensive report of a recent trip to help solve the problem. Imagine a place where clean water is so scarce you need to get it from a different country, at a cost of almost a third of your income! The problem was as clear as the available water was not. Armed with her Water for All training and a drilling rig small enough that one could travel with it, she set out to help the people of rural Africa enjoy a glass of clean water. 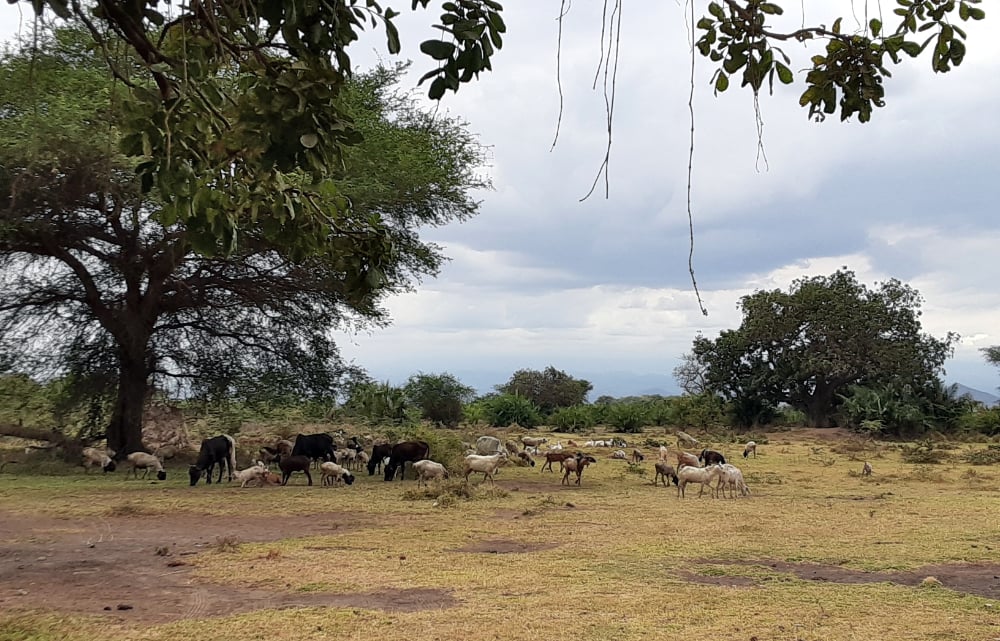 It is an area of great natural beauty. The people who live there herd goats, sheep, and cattle. Nadia found similarities between the way of life there now and those that must have existed in Biblical Israel. (Credit: Nadia Mitchell)

She was already equipped with six years’ experience of Africa, though North Africa, not the sub-Sarahan bulk of the continent. “Lizards and giant spiders crawling up my bedroom wall don’t faze me,” she wrote. “Fortunately, I had only one encounter with a snake in Tanzania.”

Nadia’s involvement came through the Kilimanjaro Mission of Hope and Outreach, a Catholic organization that works with other denominations in an ecumenical effort to bring necessities to their region. Throughout her report, she gives credit to God and to the people whom He saw fit to bring together in the project.

I do not propose even slightly to understand the well-drilling method involved. After her arrival Nadia had concerns that it might not work, in that of the few wells there most seemed to have been drilled hundreds of feet through solid rock. But upon hearing that there were hand-dug wells for irrigation and drinking water nearby, she investigated a little more. Hope emerged. “So I arrived at Kilacha with my suitcase and drilling kit, wondering what God had planned for the month,” she wrote. The majority of the supplies could be obtained locally. It would surprise most of us to learn that the equipment and supplies were carried to drilling sites via improbably loaded motorcycles over dusty, rutted roads.

The going was rough initially, the ingenious tripod-mounted drilling rig confounded by layers of rock between the layers of clay that were relatively easy to penetrate. The rock required intense, dangerous digging by hand. Sand was a problem — you can imagine trying to drill a hole in sand. Much invention and improvisation was required, the beginnings of a kind of corporate knowledge born of experience. “The only curse word I know in Swahili is ‘mchanga’ (sand!),” she wrote. “At least I consider it an expletive and I hear it a lot these days.”

But victory was achieved. The first well found sweet water — there’s a lot of salty water nearer the surface — at a depth of 41 feet.

Within days, a second well was producing good water. It is drawn by hand pump, but it is available and plentiful. And in October, after her return from Africa, she sent a note to friends, with pictures, of the third well, which had been constructed by local people who had worked on the first two.

“I think it’s especially poignant that this well was sealed on an entirely volunteer basis by our faithful, generous, compassionate plumber and welder, Martin and Makiluli, who took time off from their self-employed work to do so,” the note continued. “It was done using the well drilling method developed by Baptist missionary Terry Waller, for a Lutheran family, by a group of local Tanzanian Catholics. I love seeing this inter-Christian harmony at work.”

Nadia will return to Africa in January and again in July. By then the knowledge gained from experience will have grown. More people in this very financially poor area are getting water.

“Considering my mechanical ineptitude, I, more than anyone, know it was the Lord who granted success to this project and somehow ‘magically’ brought together a very talented group of Tanzanians who know from their hard personal experience the value of water and caught on very quickly to a new process they had never seen before,” she wrote me Monday night. “It’s just the most bizarre thing to me that at age of 66, with no experience other than a few days in a drilling workshop, somehow I had the privilege to bring this method to the Kilimanjaro region.

“My brother (who has drilled elsewhere) says with this method ‘You live and die on your welder’ and wouldn’t you know it, an extremely talented Herculean-size welder just happened to live in the little town and to have a passion for helping people get water. Makiluli would go back to his small workshop after a long tiring day of drilling and spend the evening working on welding more parts we needed.” 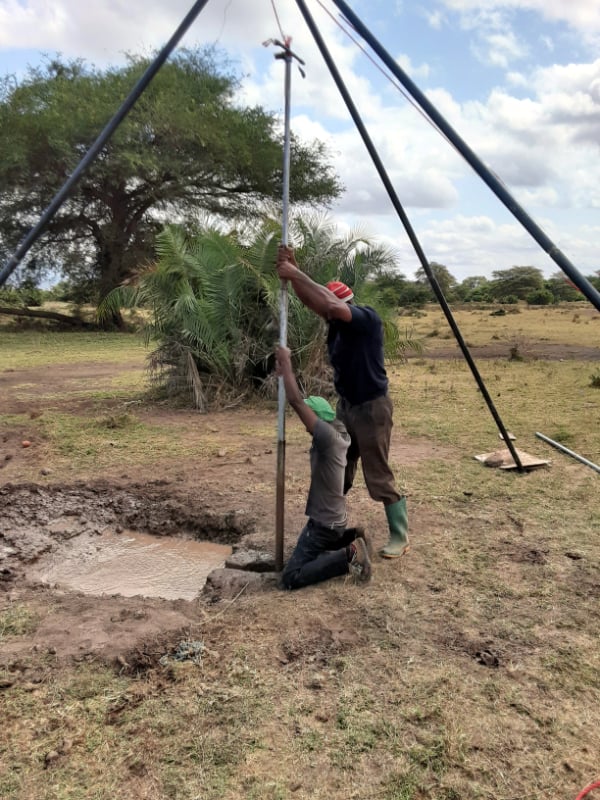 This is the simple well-drilling rig that is freeing subterranean water for the people of Tanzania. (Credit: Nadia Mitchell)

It’s a worthy project. Can we help?

I asked Nadia about this because I have great-nephews and a little great-niece for whom Christmas presents are an issue, unfamiliar as I am with being a tiny kid nowadays. What would be a better gift than a donation in their name to help little children far away have water to drink? I don’t mean to preach (though I probably will anyway): Christmas is, or ought to be, more about giving than it is about receiving (the latter, frankly, is what Easter is for, don’t you think?). It is good for small children to learn the joy of giving to others, to helping those whose circumstance deprives them of necessities, things that we too much take for granted. A note from their strange old great-uncle, telling them that this year they are giving up a present so that instead they will make others happy and healthy may not be immediately appreciated, but perhaps it will plant a seed that will grow into something sturdy and tall (and not evident enough in most of us). They’re too young for cellular telephones, but there are many young people not much older than them who find getting the newest iPhone each year is essential. For the price of a new iPhone, one could bring clean water to a half-dozen families for whom that necessity of life is at present an often unreachable luxury.

“The requested donation is $150, which is the maximum subsidy we are providing for a well for a family or elderly person who cannot afford the average $250 cost. (Smaller contributions are also welcome, if $150 is not possible.) The Tanzanian family still has to contribute lunches for the workers, labor (if physically able), and some money towards materials. But the $250 total is out of reach of many of the people who live in mud huts in the area we were working in.” Sad to say, $250 doesn’t bring much in the U.S. nowadays. But in the right hands it brings water to people for whom it is a daily struggle. Those who can afford to donate $150 will receive a photo (though not for awhile, of course) of the well they’ve paid to have dug. I hope that my little relatives have that picture framed, and look at it often, and understand about giving. By then, a lot of the Christmas toys will be broken or forgotten.

And Nadia? “I plan to return in January with some parts towards a drilling machine that will also utilize a motorcycle engine and a metal wheel with spokes made from rebar (of course made by Makiluli the welder!). The simple machine will assist us when we run into the rock layers.”

Tomorrow is Thanksgiving, and it would be good for us to remember that there are those who give thanks every time they can have a glass of water.

And that we can help them.

Tags: thanksgiving, the view from mudsock heights, charity, thankfulness, water
Article Path: Home: Faith: Can You Imagine Having No Water?