If you did not know her, that is your loss. She was the most remarkable person I’ve ever known in a life fortunate to have included many remarkable people. She was also the best and closest friend I’ve had in this life.

While I chronically miss her, her absence has been especially acute these last 18 months. One of her many talents, gifts, and skills was microbiology; she was dean of undergraduate biology at an Ivy League school. Always eager to learn, as she was dying she was also taking an online course in epigenetics, which she said was very difficult — and “very difficult” to Marjorie was nigh unto impossible for the rest of us.

We first spoke in June of 2006, at Jorma Kaukonen’s Fur Peace Ranch Guitar Camp in Darwin, Ohio, where she taught and I was publicist. Among the most memorable parts of that weekend camp was a discussion with several campers that somehow got around to human extinction. I said that I figured a bug would get us, while most of the others latched onto “global warming.” “I think it will be a bug,” Marjorie said. We then discussed the amount of research being done in what amounted to laboratory-created pathogens and how it would take just one slip-up to loose upon the world something it could not handle.

Were she still among us she and I would have returned to that conversation over the last year and a half.

Among our topics early on would have been how it was likely that the SARS-CoV-2 virus escaped from a laboratory in Wuhan, China. That assertion, sufficient to get one banned from the internet a year ago, is accepted now in polite company. Many who denounced it as an irresponsible theory in 2020 are in 2021 saying it is not only possible but likely.

We certainly would have talked about the newly blatant corruption of science by politicians. Politics, like the legal profession, is the pursuit of that which can be gotten away with. The word “science” from the lips of a politician often means the co-option of obscure gibberish to justify that which would not otherwise be tolerated. (Don’t believe me? Here’s an experiment anyone can do: Apply “follow the science” to the issue of abortion.)

There are very strong political reasons to avoid recognizing the possibility that the pathogen that has destroyed world economies and killed millions originated in a laboratory in China. The public appetite is always to do something, even if there is nothing useful to be done. Throw gasoline on a fire? Well, we had to do something! So should it be proved that the SARS-CoV-2 virus originated in the Wuhan Institute of Virology, there would be a political obligation to do something in response.

But what? What action would be an appropriate response to an unprecedented act of carelessness (while not depriving us of the Chinese goods for which we have such an appetite)? We already know that China finds nothing wrong with slave labor (and that American companies are okay with it if they can appear to look the other way). We know that China operates concentration camps for inconvenient minorities. If that has prevented the sale of a single iPhone or pair of oh-so-trendy Nike shoes, the event went unrecorded. So while we find it imperative that something be done, it must not inconvenience us. 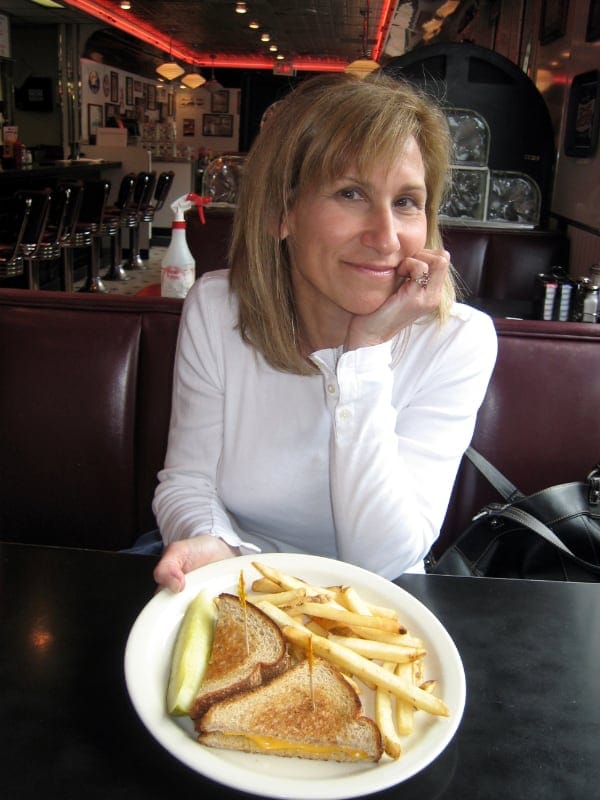 Marjorie at lunch in the the Court Street Diner in 2007, in a picture made during a photo shoot for one of her several albums of self-written country blues. (Credit: Dennis E. Powell)

Let’s take it a step further. Were she here, Marjorie and I would discuss a chilling possibility. While I do not propose that it is a fact — and I have little evidence that it is — there is a non-zero chance that SARS-CoV-2 not only originated in the Wuhan lab but that it was released deliberately. There is a legal term, cui bono, which identifies suspects by asking the question: who gained? Who profited from the offense? China has made out pretty well during this whole COVID-19 business.

Should it come to pass that we learn the development and spread of SARS-CoV-2 was deliberate — which though not likely is possible — what would be the something we should do about it? It would be by far the most costly and murderous attack ever. An act of war. It is worth pondering, even if such meditation can lead to few conclusions. One conclusion that is clear is it would be better politically to pretend it had never happened, because any proportionate response would be either too terrible to imagine or very, very inconvenient.

I would love to hear what Marjorie would say about the mounting evidence that the research which may have led to SARS-CoV-2 was bought and paid for by: you. And me. Everyone who pays taxes. There is a whole industry that does nothing but seek government grants. In my view there’s a strong argument to be made against the government giving grants at all — that’s not its job. We might have gone round and around on that one.

New documents released in response to a Freedom of Information Act lawsuit detail how the National Institute of Allergy and Infectious Diseases, a federal bureaucracy headed by one Anthony Fauci, funneled about $600,000 to the Wuhan Institute of Virology to finance studies including “Understanding the Risk of Bat Coronavirus Emergence,” and perhaps $2.5 million more in another grant.

The money didn’t go directly from NIAID to Wuhan, but instead was routed through a company called EcoHealth Alliance. If you’ve heard that name before, it could be because that was the outfit that organized a campaign to get scientists (the vast majority of whom were connected to the Wuhan laboratory) to sign a letter to the scientific journal The Lancet. The letter denounced the very idea that SARS-CoV-2 could have originated in the lab in Wuhan.

While politicians have assured us that they are following the science, the reverse is also true: scientists, first among them Dr. Fauci, have bent science to follow the politics. Efforts to launch a clearly delineated cover-up are part of the daily flow of business in politics. We’ve seen exactly that in every word of the Lancet letter and in most every assertion from Dr. Fauci.

I wonder which of us would have been first to find in the literature the letter in the British Medical Journal from a year ago which noted that SARS-CoV-2 produces statistically fewer fatal or even serious infections among people around the world whose diets and ways of life make them high in vitamin D, the key to utilization of T cells — it activates those cells to respond to pathogens. Why is this important? T cells can do things that antibodies can’t do, such as clear already-infected cells. They’re crucial in preventing infection and in recovering from infection from, among other things, SARS-CoV-2. The statistics don’t say vitamin D prevents COVID-19, but they do say a lack of vitamin D encourages it.

One of us would then have jumped to the study from May 2020 which found that “T cell reactivity to SARS-CoV-2 epitopes is also detected in non-exposed individuals” — some people, perhaps a majority in some places, have pre-existing immunity to the virus, from bouts with other coronaviruses that might include the common cold. Imagine how much worse the pandemic might have been without this.

That would have led us to a metastudy reported in The Harvard Gazette in 2017 which found that sufficiency of vitamin D reduces respiratory infections of all kinds by as much as 70 percent. (The US RDA for vitamin D is 600 International Units per day but rises to 800 for those 70 or older; unlike some vitamins, an overdose of vitamin D, even a moderately large one, even moderately large ones day after day, does no harm. The need for supplementation rises with age, obesity, darkness of skin tone. Men are more likely than women to be vitamin D deficient.) “[I]f you are deficient in vitamin D, that does have an impact on your susceptibility to infection,” said Fauci himself in an interview a year ago. “So I would not mind recommending, and I do it myself, taking vitamin D supplements.”

We have a high rate of vitamin D deficiency, according to the National Institutes of Health: “The overall prevalence rate of vitamin D deficiency was 41.6%, with the highest rate seen in blacks (82.1%), followed by Hispanics (69.2%).” The people who would benefit most from this knowledge are minorities — who have the highest rates of infection, serious illness, and death from COVID-19. Quite a coincidence, huh? (The problem isn’t cultural. Our bodies produce vitamin D through exposure to the sun. The darker your skin, the more inefficient it is in vitamin D production.)

Study after study correlates low vitamin D with poor outcomes in COVID-19 infections. “In a cross-sectional analysis across Europe, COVID-19 mortality was significantly associated with vitamin D status in different populations,” reports The Lancet. You needn’t take my word for it — follow the links and read for yourself. Bear in mind that I’m not a physician nor medical statistician, so I am not dispensing medical advice. But imagine how many people might still be alive if everyone who was vitamin D deficient had known about it in time. (The studies suggest that it takes as much as four months for the protective effects of vitamin D to kick in.)

In addition to its well known benefit in growing bones and muscles, vitamin D is crucial in fighting cancer and heart disease and, now we know, respiratory infections. So this seems like kind of a big deal. Wonder why nobody has much mentioned it? Why is our president not demanding that employers fire everyone who is vitamin D deficient but who refuses to take a supplement? (I digress, though the question is valid.) 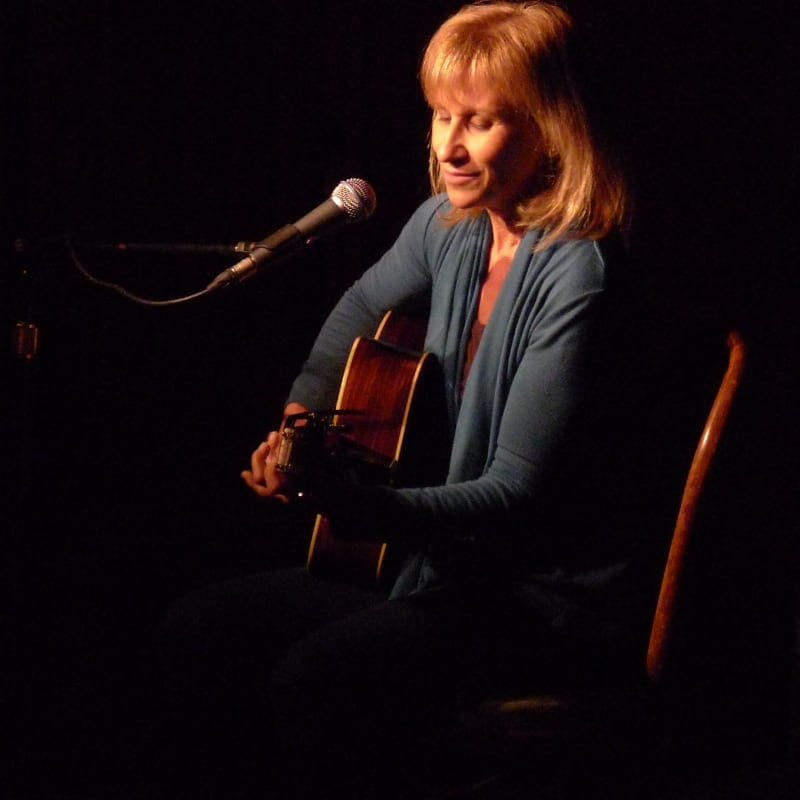 In addition to being an Ivy League dean and recording artist, Marjorie was an accomplished touring musician. Here, she performs at the Turning Point in Piermong, New York in 2010. (Credit: Dennis E. Powell)

I miss that kind of discussion with Marjorie. For our last several years, we talked about the reported breakthroughs (headlines but then never heard of again) in the treatment of cancers like the variety that gnawed at her already tiny frame. (She said she was five feet tall, but she had very small feet.) I’d tell her of something promising and she’d point out that at best by the time anything got approved she would be gone. She was right: It takes a long time for modern medicine to figure out how it is going to monetize a discovery, and usually there is testing involved, too, though we’ve seen in the last 18 months how quickly it can be done if enough money is dangled before the companies.

(We do declare a “War on Cancer” from time to time, but after a pompous announcement nothing much comes of it. When Barack Obama declared such a war — he called it a “moonshot” — he appointed Joe Biden the head astronaut. You could guess how that would and did turn out. At least he didn’t surrender, even though it’s been an endless war indeed.)

All of which I would have delighted in talking and joking about with my brilliant and accomplished best friend, Marjorie Thompson. But because I can’t, I’ll mention it instead to the readers here.

As satisfying as that is — and it is satisfying — I hope you’ll forgive me for saying that it ain’t the same.