Up Kabul Creek Without a Passport

“Let me see your papers.”

That’s not something Americans are accustomed to hearing — though it’s becoming more common in areas especially subservient to Joe “Grandpa Simpson” Biden and his smarter-than-you advisers and their masterful approach to the pandemic. But in many parts of the world it is a part of daily life in the way that schoolchildren in cities need daily to show their bus passes.

In a lot of places, your papers are everything.

Which is why it was especially alarming to hear that Joe’s new best friends, the Taliban, have been seizing the passports of American citizens in Afghanistan. In the Mideast, as in some other parts of the world, your passport is your identity. Without it, you are at the mercy of those who might not have your best interests at heart. Seizure of your passport leaves you naked and vulnerable. Your comings and goings are now no longer your decision.

You may have heard, and if you haven’t yet you will, the tense stories of reporters and others who have had to make their way out of Kabul following the ignominious American surrender under the direction of our commander-in-chief, the enfeebled Biden. The accounts we’ve heard so far have largely had to do with people fighting and squirming their way into the airport in Kabul in hope of boarding a flight to anyplace that isn’t Afghanistan. There will be more stories as the months and years unfold, of those who weren’t in Kabul and who had to try to cross the frontier into — where? Iran? Pakistan? one of the other disheveled stans? — though we won’t be hearing as much about those who failed in that kind of escape because there will be no one to tell their stories.

“All borders to neighboring countries are closed and all flights to and from have been halted, with the exception of private planes.” writes the Underground Church there. “People are fleeing into the mountains looking for asylum. They are fully reliant on God, who is the only One who can and will protect them.

“The Taliban are going door-to-door taking women and children. The people must mark their house with an ‘X’ if they have a girl over 12 years old, so that the Taliban can take them. If they find a young girl and the house was not marked they will execute the entire family. If a married woman 25 years or older has been found, the Taliban promptly kill her husband, do whatever they want to her, and then sell her as a sex slave.” 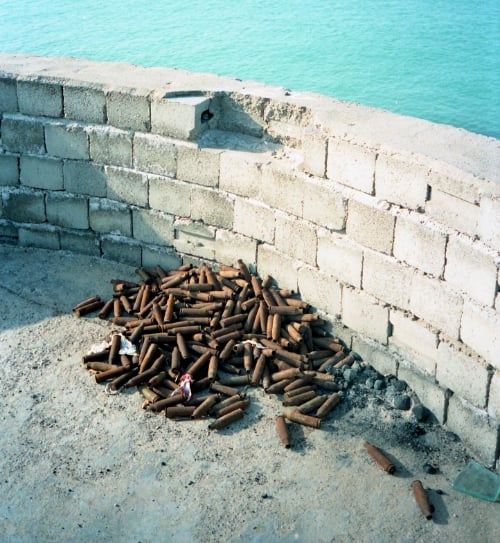 It takes a real Joe Biden — may “Biden” become a verb, signifying abject, oblivious failure — to make such a botch of things. I have no doubt that he could, if he put what little is left of his not-very-good mind to it, manage to bring about the collapse of Western civilization while trying to navigate to Icecreamistand. It may have escaped his notice — pretty much everything does — that his buddies (and new masters, it seems) the Taliban are taking away the passports of Americans.

Even people in strict Islamic countries are astonished. “How could anyone in their right mind trust a radical Islamist group?” writes a commentator in Saudi Arabia’s leading English-language newspaper, Arab Times. The answer is simple, as the writer probably knows: No one in his right mind was involved. Instead, it was Joe “Mr. Magoo but not as nice” Biden and his brilliant. advisers. (Have you notice how those advisers look as if they were produced at some factory and kind of resemble Lee Harvey Oswald?)

I’ve not had to escape under duress from Afghanistan, but I have experienced the discomfort of being relieved of my passport in an Arab nation.

Shortly after the blink-and-you-missed-it Gulf War I, it was my privilege to spend a bit of time in Kuwait, which was still largely in ruins from the Iraqi invasion. One of those private contractors we hear so much about, I was supposed to teach news writing to people at the national television service.

A small digression: It was a difficult job, in some measure because Arabic sentences tend to be very long, and when left long and translated into English they presented the possibility of news anchors turning blue onscreen as they gasped out sentences which presented no place to take a breath. The night I arrived in Kuwait City I turned on the local news and was treated to the lead story, “Today His Highness the Emir greeted Kuwaiti sports heroes.” There were rules in covering HH the E. First, whatever footage His people sent over could not be edited. Second, there could be no sound, lest some person, animal, or passing gust of wind detract from HH the E’s dignity. Third, if HH the E did anything today, no matter how trivial, it was required to be the lead story. Fourth, the video must always show HH the E face-on, which in this case meant that we were treated to the backs of the heads of the “Kuwaiti sports heroes” as they passed by and bowed to HH the E. “It was Kuwaiti haircuts on parade,” laughed another contractor, from Ike Pappas’s company, the next morning. There were more than 100 of these athletically virtuous hairdos — the thing lasted more than 11 minutes. No narration was allowed; basking in the Emir’s glow was all we needed. But even His people realized that 11 minutes of silence was too much, so they placed instrumental music behind it. “Hey Jude,” “Strangers in the Night,” and — no, I’m not making this up — “Don’t Cry for Me, Argentina.” 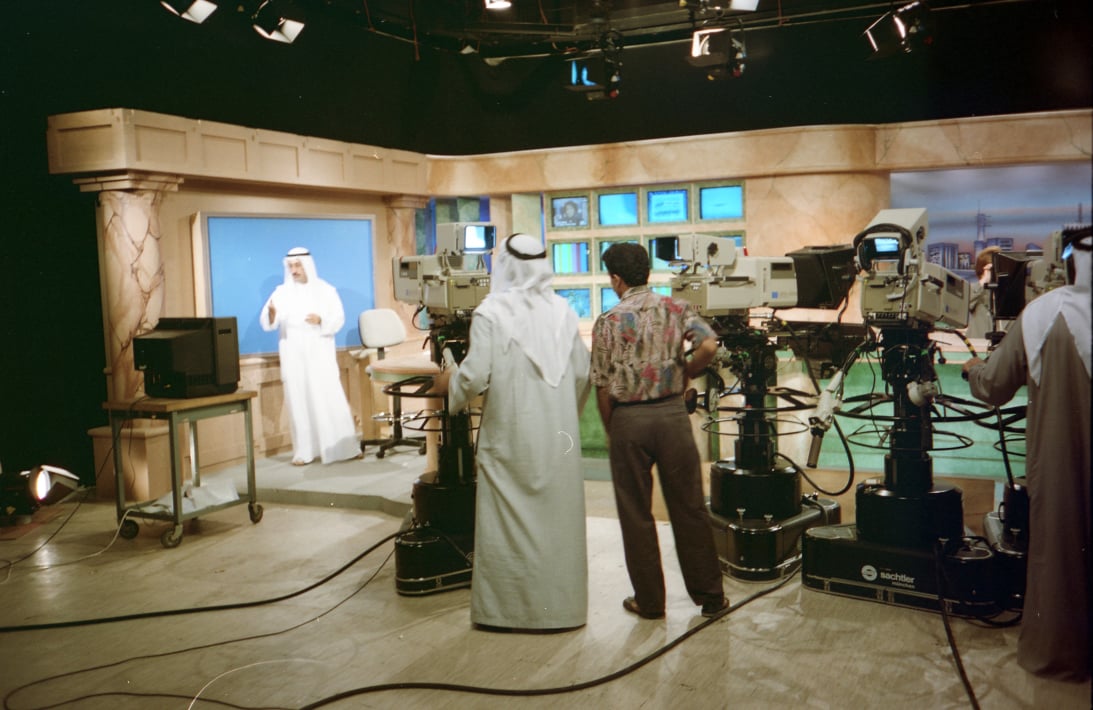 While I might have been able to do some good in preventing newsreaders’ linguistic asphyxiation, there was nothing I could do about any of the rest of it. I mentioned a few things that might have made the newscasts more useful to viewers but stopped when the Kuwaiti in charge of the newsroom mentioned that I risked being taken on “a trip to the desert.”

Things there are different from what we find in the U.S. The local English-language newspaper features front-page pictures of persons accused of crimes posed uncomfortably next to the fruits of their supposed offenses. They include listings for “absconded servants,” a euphemism, effectively, for runaway slaves — whose passports, by the way, are held by their “sponsors.” And remember — these are supposedly the good guys. And by comparison to their neighbors, they are, too 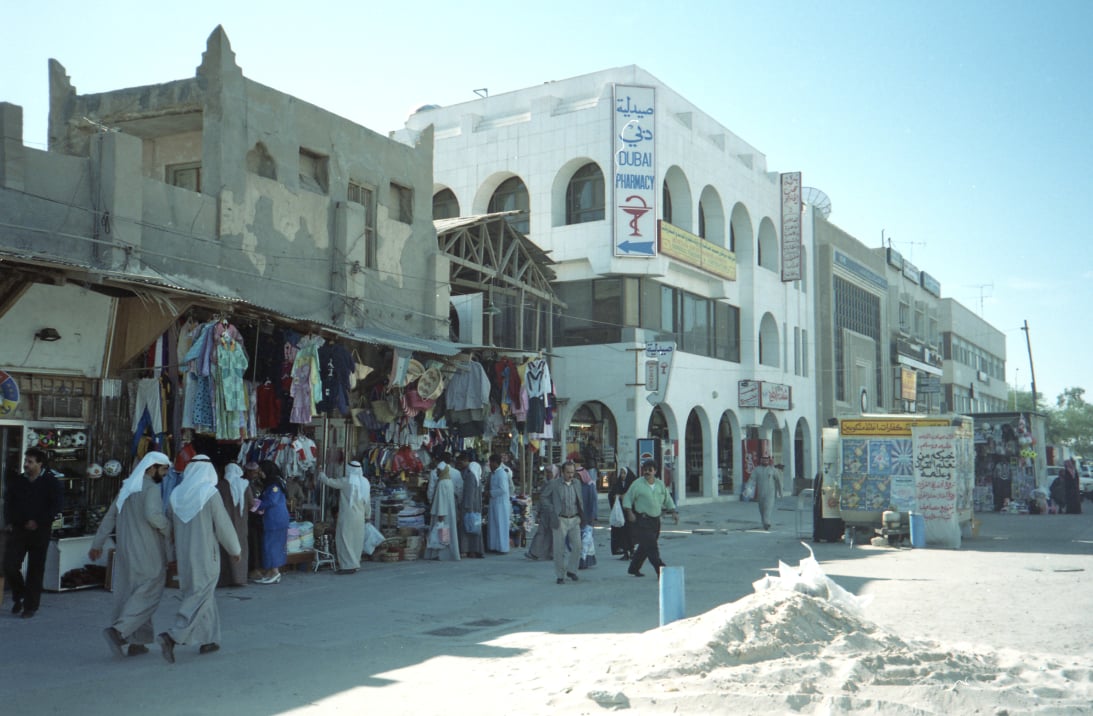 The usual not-in-Kansas-anymore clichés applies. It had its ominous aspects, not the least of which was when I was relieved of my passport right off the bat. It meant, basically, that my life was subject to the whim of the government. An exciting part of the experience was the note shoved under my door by the U.S. Embassy’s warden system saying that Salmon Rushdie was currently in the U.S. and under a fatwa, so there was a better than average likelihood that some wild Iranian or other would try to murder me. But that is the way of life in much of the Mideast. When at the end of my stay I was accompanied by a government official to the airport, it was because without his say so I would not have been allowed to leave the country. And it was not until I was actually in line for boarding the Kuwait Airways 747 to London that my passport was returned to me. (My Kuwaiti visa specified that it was good for one year, unless during that time I entered Israel, in which case it was revoked.) 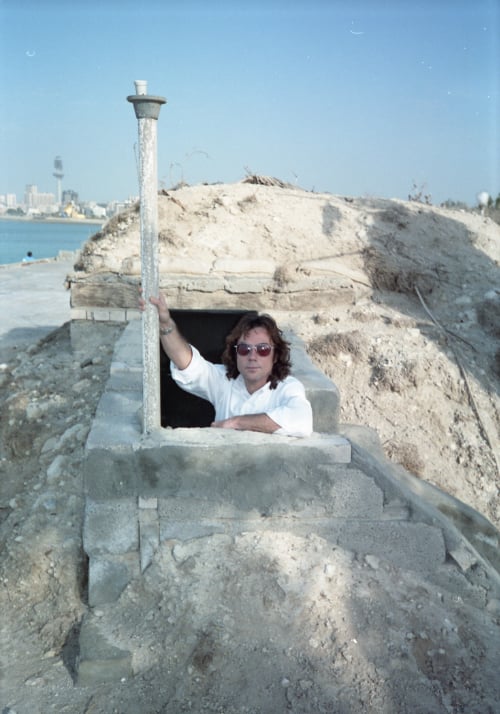 Here’s me in an Iraqi bunker near Kuwait City shortly after the end of the first Gulf War.

This is mildly scary stuff, even in a friendly nation in a time of peace. Imagine today being in Kabul on your way to the hastily slapped-together evacuation point, the airport. You’ve run the gantlet (and yes, it’s gantlet, not gauntlet) of heavily armed street gangs who are now Joe Biden’s approved government there. You’re almost beginning to breathe a little more easily when at the fourth checkpoint you show your passport and those of your family, only to have the documents snatched away as you’re told to go on your way. It’s not as if you can go to the embassy and get new ones.

You get to the airport and find thousands of people clawing their way in. Those who don’t have their papers, in this case American passports, are told to get lost. Have they ceased to be Americans?

In Joe Biden’s Afghanistan, the answer may be yes.

And if I write angrily, it is because I am angry. Until now, zero was the lowest amount of respect one could have for an American president. When you hear about the fate of those poor Afghan families, remember that it happened because Joe Biden, so cool in his stolen-valor sunglasses and Air Force A-2 jacket, and his ever-so-bright advisors decided to make it happen. And remember that it’s entirely a political calculation. He and his brightest boys imaginable are counting on your forgetting all about it in a few weeks. Let’s hope he’s wrong about that, too.

It was Barack Obama, under whom doddering Joe was vice president, who warned that Biden is not fit for office. Said Obama, “Don’t underestimate Joe’s ability to f—- things up.”

For once, Obama was right.