No, it's not an attack by a flying saucer. It's the futuristic auditorium at Kutscher's which, alas, ended up having not much of a future. (Credit: Dennis E. Powell)

It was sad to hear over the weekend that Jackie Mason has died. He was 93, so it can’t be said that he didn’t have a full life, and we can all use the reminder that our worldly existence does end, inevitably, for all of us. But he made people smile and laugh, for good reasons, and we can never have too much of that.

When I heard of his passing I quickly searched my memory for any particular anecdotes, times I might have run into him as we plied our respective trades — his, as a comic, mine as a reporter — in New York. Nothing much came to mind.

What did spark happy recognition was the mention in Mason’s obituaries of his career in New York’s upstate Catskills resorts, the famous “Borscht Belt.” That’s because it was my happy assignment to photograph some of those resorts for The New York Post in the late 1980s, not long before their decline accelerated to the near-extinction of them and their way of life. 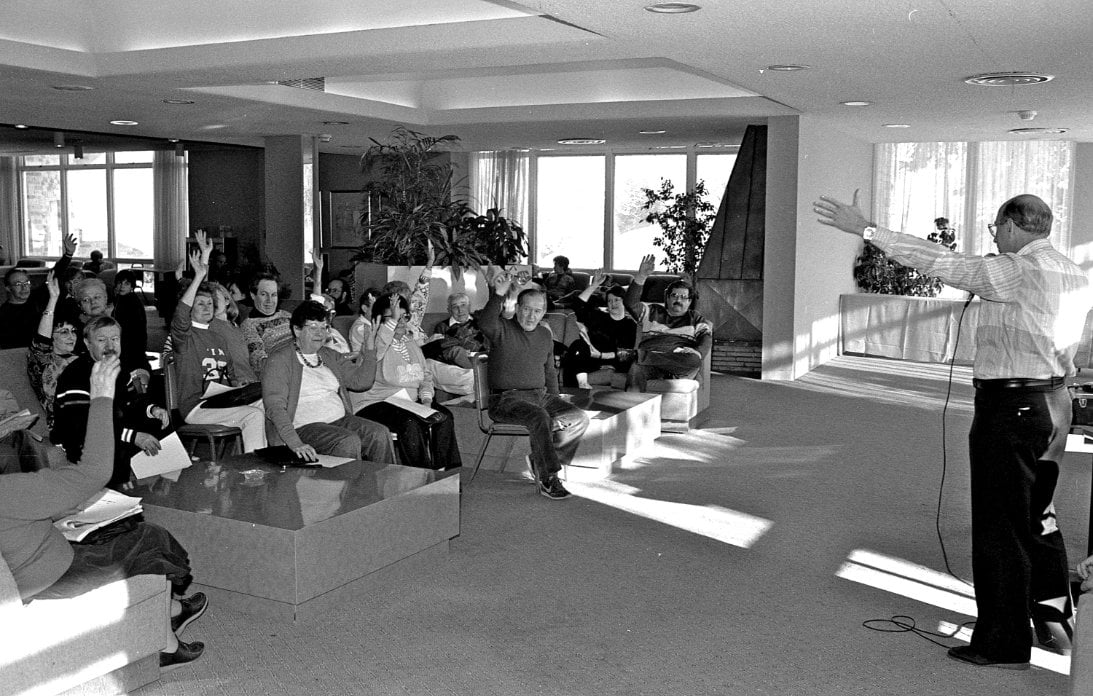 The ethnic enclaves of the New York City area have for generations often been formed along religious lines. The people I knew there were either Jewish or Catholic (I was neither at the time, but fascinated by both). Jewish friends would proudly tell me that they had been busboys or held other small jobs in Catskills resorts while they were in school. The proudest of all were those who said they had worked at Grossinger’s. Others had found summer work at places like Kutscher’s or The Pines. There were scores of smaller resorts and bungalow establishments throughout the Catskills area, most or all of them catering to the Jewish clientele. A continuing part of the radio and television series “The Goldbergs” was the Goldberg family’s annual summer vacation at the fictional “Pincus Pines.” If you watched television variety shows, you were accustomed to a stream of entertainers who had cut their comedic teeth in the Catskills resorts. Even if you are young, you might recognize some of the names on this criminally abbreviated list: Milton Berle, George Burns, Lenny Bruce, Mel Brooks, Rodney Dangerfield, Jerry Lewis, Don Rickles, Woody Allen — for decades, it was the country’s comedy factory. The movie “Dirty Dancing” was set in a Borscht Belt resort inspired by Kutscher’s.

A little history: A century ago antisemitism was even more blatant than it is now. Jews were banned from many fine hotels and resorts. So enterprising Jewish entrepreneurs began establishing resorts and vacation get-aways aimed at the Jewish people from New York City and nearby cities and towns. They were close enough for weekend visits and elaborate enough that a family might spend the summer there, with the father spending all but the weekends in the city.

(There were many variations on the theme; for instance, for years I crewed on racing sailboats out of a club in Mamaroneck, New York, that had been established as a Jewish beach club. It had even once had facilities for families to live during the summer, though if these still existed they were no longer much in use.) 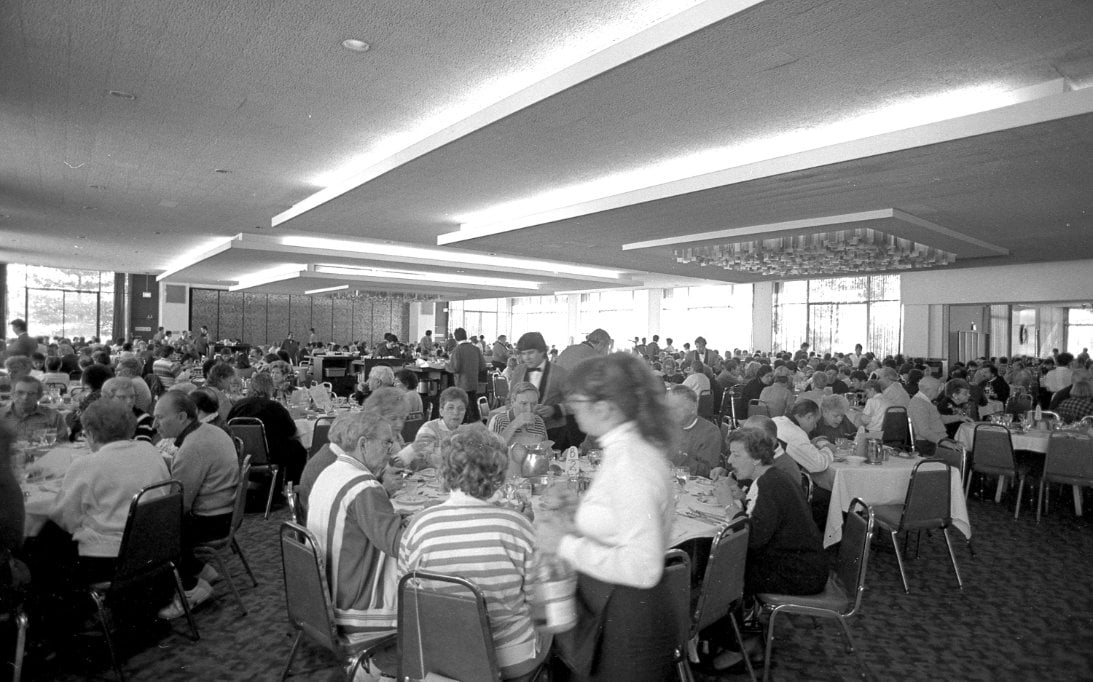 This is just a small part of the vast dining room at Kutscher’s.

It became a considerable industry, and by the 1940s and 50s the highways between New York City and the Catskills were crammed with semi-vacationers. The clubs, resorts, and bungalow camps were often all-inclusive in the sense that once you were there you didn’t need to leave the premises. There was dining, there was entertainment, there were all kinds of activities and classes. It was a unique cultural scene, as specialized as were the black blues clubs in the south during the same era or the Chitlin’ Circuit.

So when my friend and STAR Magazine colleague Rita Ross asked me to make pictures for stories she was doing for the Post about the Catskills resorts over several weekends in early 1988, I jumped at the opportunity. Over those three weekends we were immersed in Kutscher’s, The Pines, The Raleigh, and the Concord.

I think that Kutschers’ came first. Right off the bat I was surprised to see my old WOR Radio news colleague Shelly Strickler. It turned out that her husband, the entertainer and entertainment scholar Larry Strickler, was activities director at the resort. (They have always been and still are an amazing couple.) Jackie Mason had gotten a professional boost by being activities director at one of the Catskills resorts, though I don’t know which one.

We got settled in and headed to the enormous dining room for supper, and the details that set Catskills resorts apart began to emerge. 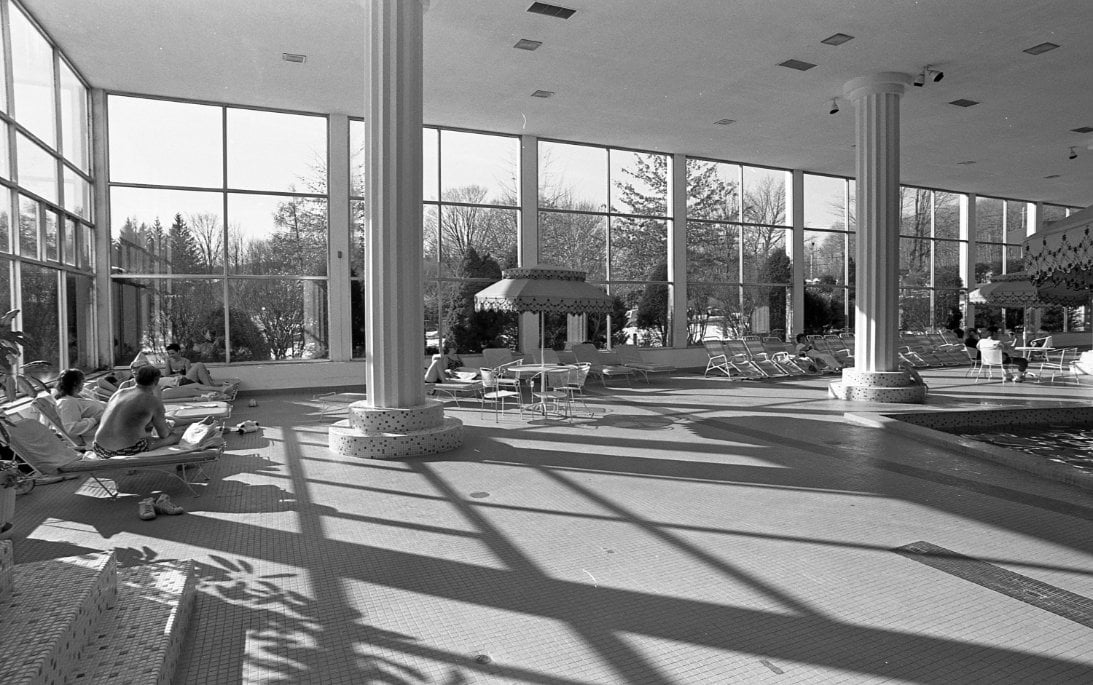 Here’s the opulent pool and sunning area at The Raleigh, in January 1988.

We were assigned to a table. We would take all our meals at that table and would always have the same server — a waitress, in our case. There was a short talk about the evening’s events and other news, but the most important part was the reminder to tip our waiters. This was a continuing theme; in the rooms there were reminders to tip housekeeping. Tips were generally given at the end of one’s stay — thus the assigned tables and the same waitress.

As the talk was delivered, we were served the first course — borscht! The deeply maroon beet soup had a big dollop of sour cream in the middle. I had never had it before and I don’t think Rita had, either, and it’s not something that one can associate with anything else, so the experience was entirely novel. I liked it, but I thought (in my gentile fashion) that it could have used a little salt. I don’t remember the rest of the meal, but it was tasty and satisfying.

Here’s a Borscht Belt joke: First woman: “This food is terrible.” Second woman: “And such small portions!” That wasn’t a problem, on either count, at any of the resorts we visited.

The evening’s entertainment took place in the large, modernistic and arguably gaudy theater that looked as if a flying saucer had beamed down the performers. There was a comedian and I think another variety act or two. Then the men stayed, while the women went to another theater for the evening’s final act: strippers! I think that this was designed to inspire the husbands and wives reunited after the show to head to their rooms and … well, I suppose the resorts took pride in the idea that future guests were being conceived on the premises. 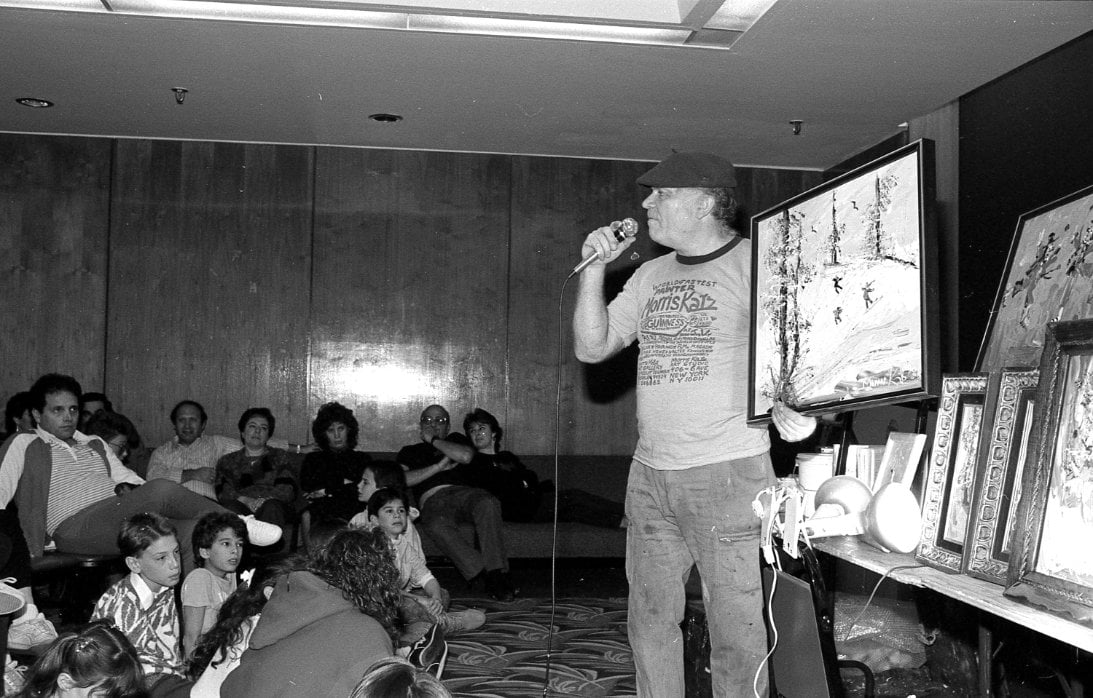 Morris Katz shows off a painting that had been a blank canvas five minutes before.

The Pines was as the name implies a little more rustic and in my estimation already a little woebegone. As we had entered the region we’d seen several abandoned bungalow camps; the Catskills culture was already declining. While the entertainments were more modest, they were innovative. I especially remember watching the incredible speed of the artist Morris Katz, who demonstrated his painting skills. I still have one of his paintings. (Yes, I paid for it. Reportorial freebies are an unforgivable ethical breach.) 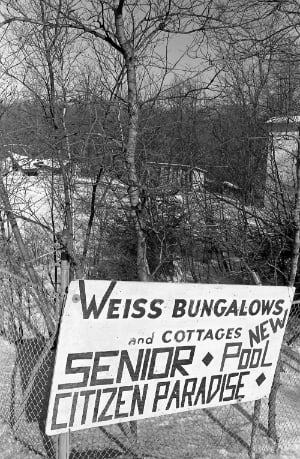 Here are the ruins of one of the many bungalow camps that once richly populated the Catskills region of upstate New York.

The Concord was more up-to-date and less ethnic than the other two, resembling in most important ways a modern high-rise hotel. The thing I most remember about it was the elevator ride with a middle-aged couple. The woman was wearing a pants suit that looked like a stack of inner tubes, causing her to become an ad hoc Michelin woman. Oh, and the garment was shiny silver. Today, I would comment on the uniqueness of her outfit and ask to make a picture; then, I was able only to stifle my laughter, which was not helped by glances exchanged with Rita. As soon as we got off the elevator, Rita, giggling, whispered, “Would you be caught dead in this?” That was the name of a kind of bitchy feature each week in the STAR, in which celebrities were shown in their most embarrassing attire.

And now the Borscht Belt is gone. Grossinger’s closed in 1986, before our visit. The Concord and the Pines are abandoned ruins, as is (or at least was — part of the building has been turned into a health resort) Kutscher’s. All I remember about The Raleigh is its opulent indoor pool and “beach,” that allowed for summer-ish recreation in the dead of winter.

With the demise of the Jewish Catskills resorts went the underpinnings of the most lavish era of American entertainment, along with vast cultural influence that shaped everything that we all thought was funny. Also gone is a way of life that enriched the Jewish community in ways that can’t be replaced.

R.I.P., Jackie Mason. You knew all of this and laughed anyway. You would perhaps have understood how happy I am that my chosen profession allowed me to taste it.

Tags: antisemitism, resorts, catskills, jackie mason, the view from mudsock heights, comedy
Article Path: Home: Culture: Jackie Mason was One of the Few Survivors of a Culture that Shaped Us All