What in the World is Pope Francis Up To?

Last Friday Pope Francis effectively banned celebration of the Traditional Latin Mass, a kind of worship that is unsurpassed in its solemnity and, at its best, in its splendor.

In so doing, he flung down and danced upon one of the signal accomplishments of his predecessor, Benedict XVI, and told millions of devout and pious Catholics around the world that the Church is no longer the place for them.

Say what you will about the Roman Catholic Church, it at least has had — still does, though to a decreasing extent thanks to Francis — a traditional, doctrinal, and liturgical history that extends unbroken to Christ Himself. The Mass, in Latin, is at the heart of that.

I wrote about my experience of the TLM at St. Paul Church, in Athens, Ohio, in late 2015:

Fifty years ago last week, something called the Second Vatican Council came to an end. It had lasted more than three years and had considered the Roman Catholic Church in the modern world.

It was widely covered; as religions comprising more than a billion people tended to be.

The council, frequently referred to as “Vatican II,” had issued many documents in the form of constitutions, declarations, and decrees. These were widely misinterpreted, primarily by those who had not read them.

Congregations went hog-wild. Soon there were folk-rock Masses, hootenanny Masses, puppet Masses, and so on. Encouraged to participate more actively in the Mass, congregations were soon flailing their arms around, adopting postures reserved for priests, and undertaking other alterations to the principal service of the Church. Those who looked askance were told to get with “the spirit of Vatican II.”

Translations into the vernacular were, often as not, very loose. They were not so much translations as interpretations, which sometimes included what various groups wished the liturgy would include.

(The liturgical changes during the swinging 60s and nearby years were by no means limited to Roman Catholicism. In one famous example, the beautiful language of the Anglican/Episcopal Book of Common Prayer of 1928 was cast aside for … something else.)

The liberties taken with the purported findings of Vatican II were such that in 2007 Pope Benedict issued an apostolic letter, Summorum Pontificum, in which he decried the pain caused by “arbitrary deformations of the liturgy.” The Latin Mass was still permissible, he said, and always had been.

There’s much more to it, but this brief history is necessary to introduce a wonderful and remarkable thing: This month, for the first time in nearly half a century, the traditional Latin Mass is regularly being said in Athens. It is celebrated each Saturday morning at 8 a.m. at St. Paul Church.

The revival of the old liturgy is the work of Fr. Jonas Shell, who arrived in Athens as parochial vicar in July. Young and enthusiastic, he began the Latin Masses Dec. 5, in response to the request of several parishioners, some of whom had sought it for years. (It wasn’t that there was opposition to the Latin Mass here so much as a shortage of priests with the time to add it to their schedules; contrary to popular supposition, priests and other clergy do not have six days off each week.)

Let me describe the Latin Mass to you, because it is unlike anything that you, Catholic or not, are likely to have encountered.

As has been true in other places where traditional Mass has been reintroduced, the congregation (at the two celebrations of it so far) has included some who are old enough to remember when it was the only form of the Mass offered, but also a number of young people filled with love for the Church and eager to know it’s depth. A family of mother and father plus two young sons and a daughter. from Stockport, have come to the traditional Mass both weeks, mother and daughter each wearing a mantilla, as was once expected.

The difference in the liturgy and the atmosphere could not be more pronounced.

Modern Mass is conducted as if silence is the enemy, that there should never be a time when there isn’t something noisy going on. Active participation is so encouraged that it sometimes seems as if there isn’t an opportunity to contemplate the mysteries of faith. Even during communion itself, the most fundamental of the seven sacraments, congregants are expected to sing rather than think about how profound it all is.

The Latin Mass is quiet, often silent or close to it. The Church teaches (and I think it stands to reason) that prayer must include listening, to hear what God tells us. This is easier to do, especially for easily distracted persons such as myself, when there’s not sensory overload. When there is music with the traditional Mass (as Fr. Jonas hopes to institute from time to time, employing seminarians), it is typically in the form of chants that encourage this phenomenon rather than replace it. 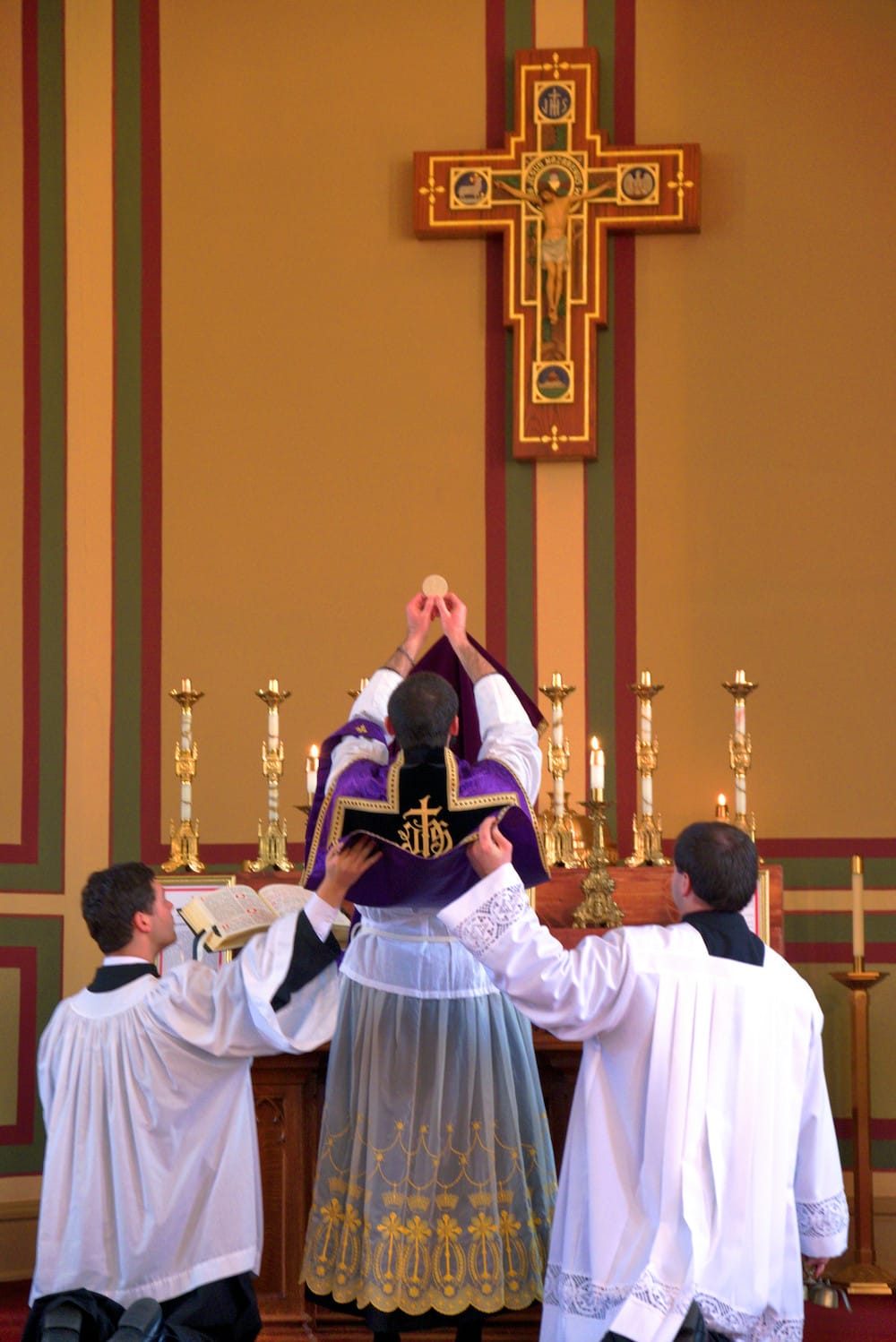 Caption/Description: Fr. Jonas Shell raises the host to Heaven in “the Elevation,” during a Traditional Latin Mass. The TLM is conducted “ad orientem,” which is to say facing the East, which in properly constructed churches is the direction of the tabernacle and the crucifix. (Credit: Dennis E. Powell)

Modern Mass has in some ways unintentionally come to resemble, say, a PTA meeting. The instant it is over, people are talking and laughing, greeting people across the room, immediately transported from whatever was going on minutes before to the modern secular world. Those who wish to stay and pray must have powers of concentration that far exceed my own. (I am as guilty of these things as anyone else, alas.) The Latin Mass ends in silence, and congregants remain silent; most remain to continue their prayer.

It is entirely beautiful and at least to me inspiring. And now it is to be had here in Athens again, after an absence longer than most people here have been alive.

Some no doubt see it as a liturgical relic, but it is far more than that. It transforms the church into a room full of holiness upon which those there may draw, taking from it as much as they wish or need.

Last Friday Pope Francis tried to kill the Traditional Latin Mass, as he has essentially killed the Church in China (by agreeing to let the Chinese Communist Party appoint the bishops) and the Knights of Malta, and is apparently hard at work helping kill the Church in Germany. He is intensely political, while his theology is all but nonexistent. When Francis published a series of pamphlets on theology, the Vatican announced that his predecessor, Benedict XVI, had in full voice endorsed the booklets. It turned out that Benedict instead had said he hadn’t read the little tracts, perhaps as an act of mercy, and had no intention of doing so anytime soon. Benedict’s letter to that effect was actually doctored in a photograph released by Francis’s Vatican. (Benedict is a theologian and his deep and meaty publications are many.)

Francis is also known for interviews with his atheist friend Eugenio Scalfari. Three years ago Scalfari quoted Francis: “There is no hell, there is the disappearance of sinful souls.” A little more than a year later, Scalfari quoted Francis as saying that Jesus was “man of exceptional virtues” but “not at all a God.” Early last year Scalfari had Francis denying the bodily resurrection of Jesus. Vatican denials have been non-denials. And Francis continues to grant interviews to Scalfari.

The list goes on; these are just the outrages that come to mind. Nothing seems further from Pope Francis’s concern than pious parishioners or the saving of souls, even as attendance at Mass and membership in the post-Vatican II Church decline.

Eradicating the TLM serves no theological or religious purpose, but it does serve the goals of the extreme liberals in the Church. The pronouncement (which is, by the way, entirely outside the doctrine of infallibility) was expected, but it was thought that Francis would at least wait until the death of Benedict before erasing one of his most devout acts. But now Francis himself has been ill — he is 84 — and speculation is that he was pushed to act now by allies who feared that he might be replaced by someone, well, more Catholic, who would not fall into line with their agenda.

Those who are more Catholic were predictably outraged.

“My desire for salvation constrains me from significant commentary at this time,”wrote TLM champion Fr. John Zuhlsdorf following Francis’s Friday fiasco, who later said ” … I am forced to remark that the vulgarity of this document is matched only by its cruelty.” Tweeted the Catholic writer Michael Brendan Dougherty, “You gotta admit, there's something deeply funny about the state finally relenting and allowing our form of worship, only for the pope to presumptively ban it.”

Traditional Catholics continue to wonder how much damage this papacy will do to their Church and, sadly, their faith. A priest friendly to the TLM reminds me that we’re told to bear our crosses happily. But it is especially unfortunate that the pope himself has decided to be one of those crosses.

Tags: catholicism, faith, christianity, worship, latin mass, the view from mudsock heights
Article Path: Home: Faith: What in the World is Pope Francis Up To?