Gravely considered, in Light of the Fireflies

It may be about time to get rid of the old Gravely.

The last time I wrote about this venerable piece of equipment it spawned a reaction from a Gravely fan in northern Ohio so strident that Athens NEWS editor Terry Smith wanted to call the authorities, lest (or perhaps in hope of a good story should it happen) the angry fellow come round and murder me.

I remain unmurdered (as I write this, anyway) and the Gravely is still here, heavy, powerful, and unforgiving of those who don’t take it seriously. It is, by the way, a strange garden tractor.

Clarity demands that it be pointed out that I’m not talking about the modern Gravelys popular with professional landscapers but the rather cruder 1968 model in my barn.

Though the company is now located in Wisconsin, the Gravely was conceived and birthed near here. Benjamin Franklin Gravely, who lived across the river, had an idea for a powered plow, pushed forward by engine from an Indian motorcycle. That was in 1916. A friend of his had a machine shop in Middleport, Meigs County, and it was there that the first Gravelys were made.

So it was appropriate that I got my just-then-overhauled Gravely from the little shop in Pomeroy, a few miles from its ancestral home. When mine was made the company had long since moved to Dunbar, West Virginia.

For more than 60 years — the last two-wheeled Gravely was built in 2004 — the Gravely was the standard for small tractors, largely because of its nearly unlimited range of accessories. This included a wide selection of mowers and cultivators, snow blowers, pump attachments, a thing to remove old roofing — I bet that anyone who helped hoist a Gravely onto a roof does not remember the experience happily — and my personal favorite, the chainsaw attachment that stuck from the front of the machine, in the fashion of a mounted knight’s lance.

Mine has the circular front-mounted mower, its heavy blade so well balanced that I think I could mow a while, turn off the machine, go inside and have lunch, and come back out to find the blade still spinning. If you think that this might be the teensiest bit dangerous you’ll get no argument from me. I also have the sulky, a two-wheeled attachment that fits on the back of the machine and has a seat, for ride-behind work. The sulky, too, poses its challenges to health and well-being: The handlebars are so long that when one needs to make a turn after entering a dip, they can visit space occupied by one’s … — let me put it this way: if you manage a choral group that has too many bass singers and not enough sopranos, give one of your basses an old Gravely with sulky and send him out to mow a hilly area. When he returns, your problem will be solved.

Without the sulky and with the mowing deck, my Gravely resembles the Starship Enterprise upside-down. 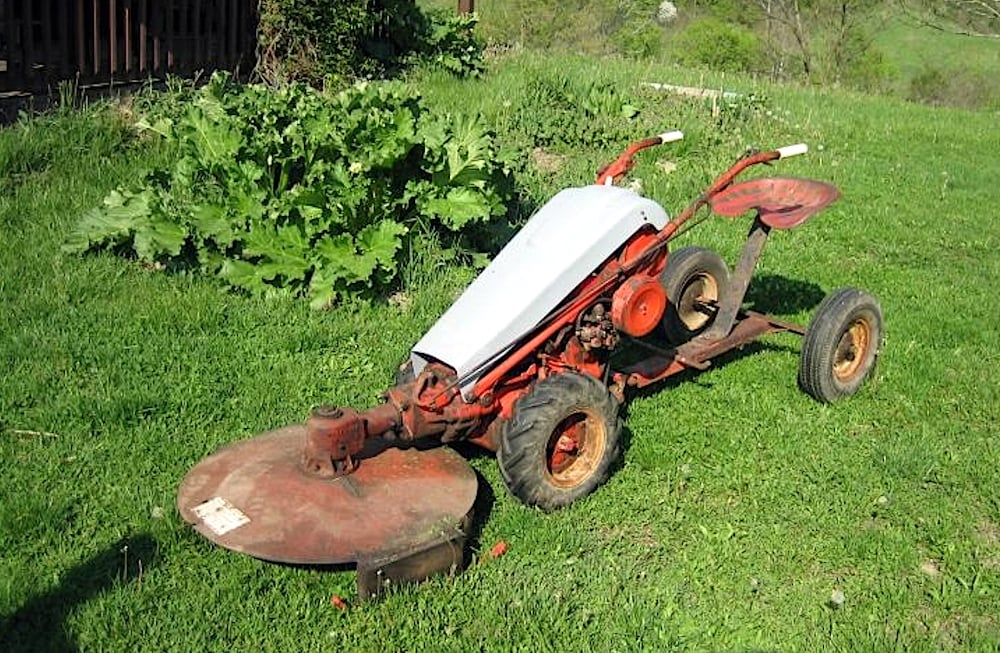 The Gravely ready to boldly go with its sulky. (Credit: Dennis E. Powell)

There are some other design aspects that take some getting used to. For instance, the movement of the tractor is controlled by a lever, nothing surprising there. What you wouldn’t guess is that to go forward you pull the lever back, and to go in reverse you push it forward. It’s deliberative and probably not the choice that would come to mind in an emergency.

It was and is a beloved thing. I like mine, though I don’t much use it anymore and have always appropriately feared it (or perhaps my operation of it; the two are related). There are Gravely collectors. There is an old Gravely club. They are in their field, so to speak, what Ford Model As and Boeing-Stearmans are in theirs.

Though the fact is that I’m not doing much mowing at all just now. I’ve made it a tradition these last few years to leave unmowed a lot of area that I used to think of as lawn. This is in honor of fireflies.

Really. After the 2016 cicada festival here, I acted — or, actually, failed to act — on what Dr. John Cooley of the University of Connecticut had told me that summer about fireflies: “They’re under tremendous pressure.” All our mowing and flashing lights are confusing fireflies in their summer passion, and as a result their numbers are falling.

“The messages fireflies send are complicated and not entirely understood (beyond, of course, their primary purpose), but it’s known that their flashing identifies their species — turns out, there are about 100 different species of fireflies in North America — among other things. In some species, the female is flightless. She’s the “glow worm” of song and story. (Firefly larvae also glow, but their light warns predators that the larvae don’t taste very good.)”

So I don’t mow the big back yard until the lightning bugs have had their good time.

This year, the effects are evident. I’ve always had a lot of fireflies, but this year’s crop seems the biggest ever.

The effects are evident in other ways, too. The grass in the back yard is waist-high. That of course means growth, too, of various invasive plants — don’t get me started — so I actually look forward to the great mowing to come.

But this year, as last, I’m not going to use the Gravely. For the last little while I’ve made almost exclusive use of a Missouri-made Swisher walk-behind “string” trimmer. It resembles the Gravely a little — circular cutting area out front, biggish wheels — though the wheels aren’t powered and there is no sulky. Its “string” is hexagonal in cross section and nearly the diameter of a pencil. (The other day I saw some made by Shakespeare, the fishing rod company, that felt as if it had a sawtooth edge — really nasty stuff. I regret not getting any and plan to correct the omission at the first opportunity. I want those terrible introduced plants to know who’s boss.)

The Swisher is lighter, smaller, and easier to manhandle than the Gravely, even though the latter’s wheels are driven by the engine. It whacks through things you wouldn’t expect, and it’s a lot more forgiving than any solid-bladed mower. Anyone who has hit a hidden rock or small stump with a regular mower can attest to the shock it sends right down to the soles of one’s feet. The only downside is the need to carry around a few extra 18-inch lengths of “string,” which I cut from a 300-foot roll of the stuff. (Replacing them takes about a minute, which is a lot better than changing a mower blade. And mower blades aren’t available in 300-foot rolls. So I imagine I’ll seek out a Gravely collector who is up for a restoration and see if we can make a deal.

Though I can imagine a Jim Gaffigan or George Carlin bit where on name alone he compares the merits of an implement named “Gravely” to one named “Swisher.”