There used to be a joke — well, we said it was a joke — among photographers: when shooting family groups and weddings, put the inlaws at the ends of the line of people. It would then be easier to crop them from the picture if things didn’t work out.

Nearly 70 years ago, in the famous and infamous Army-McCarthy hearings, the eponymous senator, Joseph McCarthy, waved around a photograph of two men and claimed (or suggested) that the picture illustrated some clandestine meeting between them (and a photographer?). Later, a full version of the picture was found. It showed the two were surrounded by others in a posed group photograph. It did not prove the allegation McCarthy was making. At that time, in 1954, there was still some regard for the truth. Poor summer children we, the people actually expected truth from elected officials and would grow angry when an official was caught in a lie. It is said to have been the beginning of the end for McCarthy, but numerous moments have claimed that title, so all we can say with certainty is that it did him and his cause no good.

Years ago, I was a member of an organization called the National Press Photographers Association, which sought among other things to uphold high ethical principles among its members. Among them was the prohibition of posed or manipulated pictures, save for cropping, dodging, burning, and such when it did not alter the meaning of a picture. It was a losing battle, but some people — myself among them — embraced those principles.

(There was frequently told and probably still is a story of an especially egregious violation of those standards. Each year, the NPPA and the University of Missouri Journalism School would hold a photojournalism workshop, with dozens of news photographers and advisers descending on some small Missouri town and spending a week photographing the dickens out of it. I remember and cherish having been invited as a kid to attend the one in 1970 in Bolivar, Missouri. One year one of the advisers — who always included photographers and editors from The National Geographic, LIFE, and the country’s leading newspapers — committed the most unforgivable sin imaginable. The adviser, who happened to be the very famous photo editor of LOOK magazine, told one of the photographers that his picture of a young boy on a swing, alone in a big playground, would be better if the boy were crying. He said the photographer should have gone over and abused the boy until he wept. Word of this got out, and the adviser was ejected from the workshop and told never to return.)

Those lessons, hammered into me at an early age, were powerful and remain so. I hate it, for instance, when there are utility lines in my pictures, and often decide not to make a picture when there are those or other signs of modernity present. (This, I know, is stupid.) I’ll sometimes take a picture from a different location so as to obscure or eliminate those things. And I always feel a little guilty about it.

It’s possible to go on and on about this kind of non-alteration alteration of pictures. Indeed, one could navel-gaze for a while simply over whether not taking a picture keeps the full story from being told. Or whether using a trick lens, which can seem to alter perspective, is by definition twisting the truth. This kind of contemplation — and believe me, I’ve engaged in it — arrives at no answer because there is no answer. And it’s like worrying about a mouse when there’s a bear at the door.

That giant and angry predator comes in the form of quick, easy, hard-to-detect computerized photo manipulation. We cannot believe the images before us, yet we’re conditioned to swallow them up wholesale.

I learned this lesson a decade ago. Several members of the great old band The Byrds were performing at a place where I worked. At the performance the master of ceremonies joked that David Crosby might have been seen on the premises and who knows, maybe he’ll come on stage to join his erstwhile bandmates. The next day, also as a joke, I found a picture of Crosby, taken years earlier under wildly different lighting, and pasted Crosby from that picture into one I’d made of the other guys performing the night before. I sent it to a few people from the venue and to a couple of other friends. (I’d include it here, but I do not own rights to the Crosby picture.) Though it was obviously manipulated, and I’d included the unmanipulated pictures, there were several who nevertheless believed my phony picture was real.

It had been, as is specified by the modern word invented in dishonor of the computer program, photoshopped.

That kind of manipulation of true photographs to produce false ones is not especially easy. It can take hours, if one wants to do a nearly undetectable job of it. (Or even a fairly believable one, not that people are very skeptical about pictures.)

Occasionally I’ll mess around with a picture, just to learn if what I think could be done truly can. For instance, seven years ago my editor and I drove to Zanesville, Ohio, to take a hop on a restored B-17 bomber. There was a model P-51 atop a radio mast at the airport, and if I stood in just the right place I could make a picture that was perfect for manipulation.

Home, later, I did just that, and the before-and-after images are here. If you didn’t know better, you might just believe it. 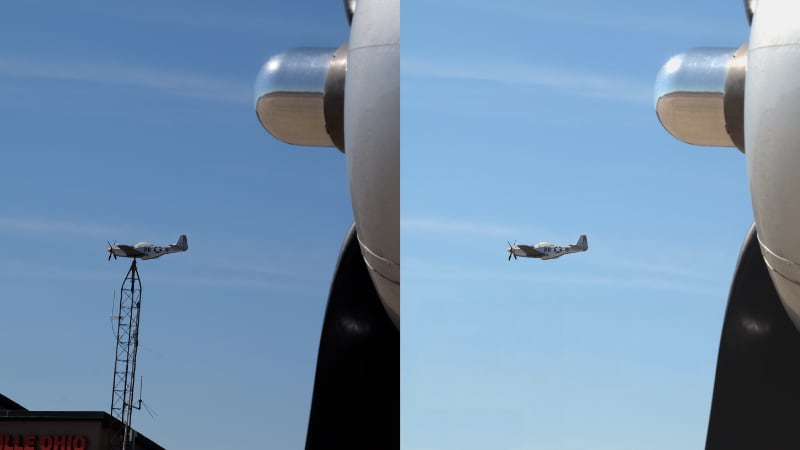 Standing under the wing of the B-17 on the ramp, I made this picture (left). Through a half-hour’s careful manipulation, I made the picture (right) into a flight over Germany in World War II. Five minutes more and I could have filled the sky with P-51 escorts.

All of which is mildly interesting to those who do not make pictures for a living and therefore do not resent real, unmodified pictures coming into question. But now there’s something new and frightening. You might have seen it advertised, among the endless televised stream of cellular phone advertisements. It’s called “Magic Eraser,” and it is a free application from Google for that company’s Android phones.

It removes things from pictures made by the phone’s cameras.

As previously noted, I recently got such a phone and installed on it an operating system that respects privacy. This operating system, GrapheneOS, allows Google applications to run on it, sometimes by telling those apps what they want to hear to make them behave, in the fashion of the attendants in a home for the senile (insert Presidential adviser joke here). Not all features work because sometimes the applications, which always want to phone home to report on you, actually need to phone home to offload some of the processing work. Several times, Google’s camera applications — Google Camera and Google Photos — have complained that I have denied them internet access and therefore won’t do what I asked of them. The most notable of these is a lens effects tool in the Photos app.

So I was surprised that “Magic Eraser” works just fine on the phone alone, without assistance from the home data mine.

The advertisements show how irritating distractions can be removed from pictures just by scribbling over them or drawing a circle around them. If you’re visiting the pyramids and think there’s one pyramid too many, you can make it go away, or so we’re told.

Well, it works. It works pretty much as they say it does, and if the result isn’t as you like you can try again — it saves (or at least can save) the original.

I tested it here, in my own back yard, where resides the remains of a bird feeder that was more a squirrel feeder despite the previous owners having nailed an aluminum sheet around the post to make it slippery. I’d just as soon it disappear, but it’s set in a big blob of subterranean concrete. When the sun goes nova and eradicates the Earth, that post will be the last thing to get vaporized; I’m sure of it.

It worked. I took a couple swipes at it and learned that there’s an advantage in being imprecise — that helps the application phony up what it needs to invent to replace the offending item. If you know what was there you can tell that it’s gone, though if you’d never seen the “before,” you’d not guess that this is an “after.” 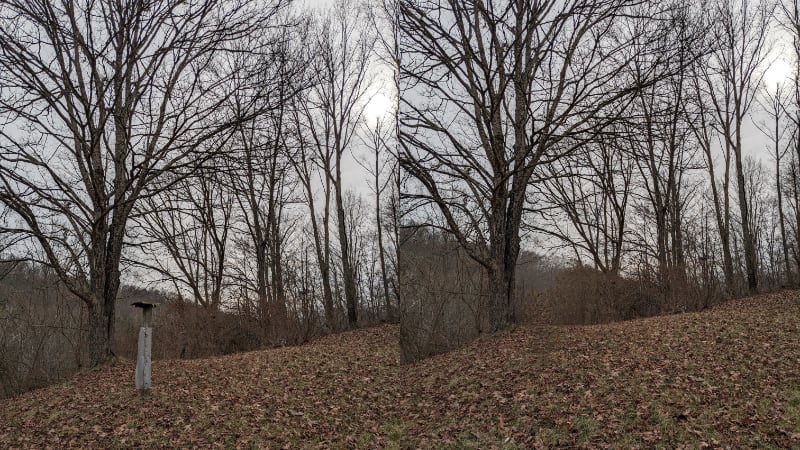 Google’s Magic Eraser does the job (right) of removing the offending post in the original photo (left).

It’s all good fun until someone gets hurt. I would not want to be part of the group posing with Vladimir Putin if Putin gave his Google Pixel phone to the photographer. (To be clear, I wouldn’t want to pose with Putin at all unless I had a loaded pistol.) Many disreputable governments over the last decades have made a practice of removing once-persons now non-persons from photographs.

Now, it’s trivial. Google should adopt the slogan “Lying with pictures has never been easier.” Though it runs counter to Google policies, because it’s true.

The saddest part is that it will, over time, makes us come to doubt real pictures, too.