Something I’ve long hoped would become a family tradition may have finally begun to sprout.

It goes back nearly 20 years. That was when one cold and lonely winter night I happened on a broadcast, on one of the cartoon channels, of “Mister Magoo’s Christmas Carol.” Much to my surprise, I remembered all the words from all the songs. It had premiered in 1962 and was broadcast each year afterwards until it wasn’t anymore. It was wonderful and, as I realized as I sat there in my Connecticut home with tears in my eyes, still is.

“Mister Magoo’s Christmas Carol” is a show within a show. It has the title character, voiced by Jim Backus (whom many will remember as Thurston Howell III in “Gilligan’s Island”), headed to a Broadway theatre for the opening of a show in which he is to star. That show is a musical adaptation of Charles Dickens’ “A Christmas Carol,” of course. Mister Magoo was already a well-established cartoon character, a diminutive, nearsighted, slightly cranky old man.

We should remember, or learn if it’s beyond memory’s reach, that New York’s Broadway theater was once a very big part of the national entertainment. Before the slick hucksterism of Southern California took control, the plucky, slightly grimy Broadway was the center of the entertainment industry. The “Tonight Show” was broadcast from there, for instance, and would be until 1972. The “Today Show” also originated (and originates now) in Rockefeller Center, smack dab next to the theatre district. Both of those programs frequently featured singers and actors from the legitimate theater. “I Love Lucy” was set in New York, and guest stars were often stars, too, of the Broadway stage. There were “movie stars,” but seldom were they called “actors,” unless they had been recruited from Broadway. So of course the show would be set on Broadway. It would have been silly had Magoo showed up at a Hollywood movie set (which is surely how it would be done today, if such a show were produced, which it wouldn’t be). 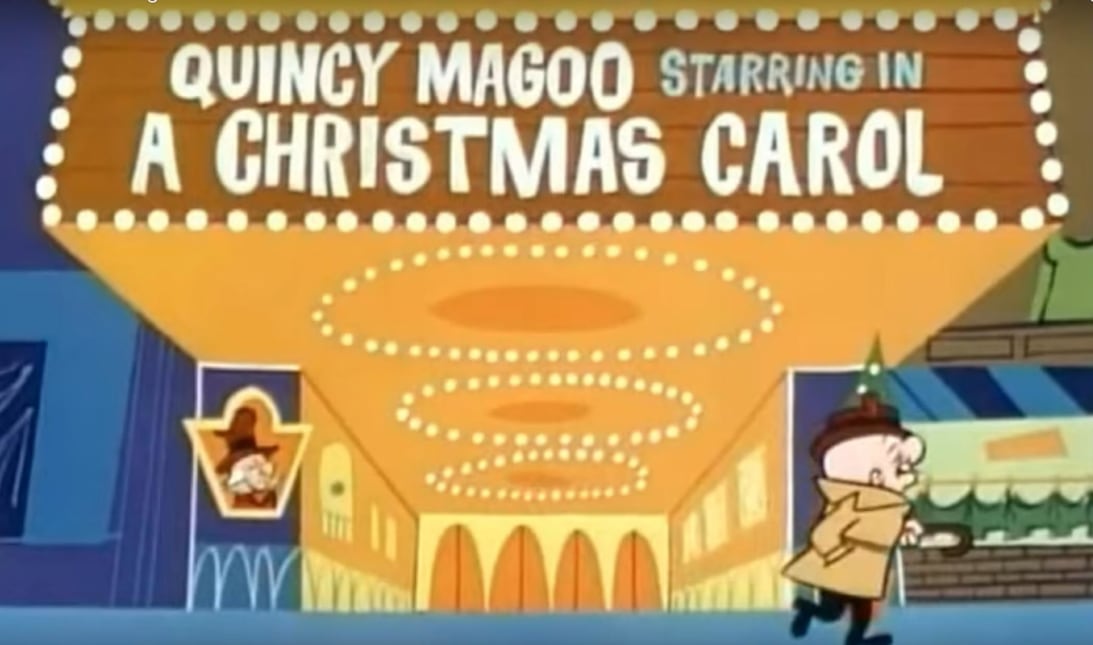 The show-within-a-show was set on the Broadway stage. Here, Mister Magoo, myopic as ever, wanders past the theatre on opening night. (Credit: Universal Pictures)

What’s more, the talent involved were steeped in the legitimate New York theater.

For instance, the music for the many heartwarming songs was written by Jule Styne, who wrote the scores to many Broadway musicals, among them “Gentlemen Prefer Blondes,” “Bells Are Ringing,” “Gypsy,” and “Funny Girl.” Lyricist was Bob Merrill, whom you might remember for “How Much Is That Doggie in the Window,” “People,” which became Barbra Streisand’s signature song, “Mambo Italiano,” “If I Knew You Were Coming I’d Have Baked a Cake,” “Honeycomb,” “Love Makes the World Go Round,” and numerous other songs that have become American musical standards. He collaborated with Styne on “Funny Girl” and was involved, usually as lyricist and sometimes as composer, too, in a litany of successful Broadway shows.

Besides Backus, who split his time between New York and California radio shows when radio was still a thing, the cast included Morey Amsterdam (well known at the time for his role in “The Dick Van Dyke Show”) who while a vaudevillian in his early life later was host of the “Tonight Show” predecessor “Broadway Open House” on NBC; Broadway musical star Jack Cassidy (father of David Cassidy of “The Partridge Family” and married to the actress Shirley Jones) appeared as Bob Cratchit; Jane Kean, who was a Broadway star though she’s probably best remembered from “The Honeymooners,” (she was also Jim Backus’s sister in law); and Paul Frees, known as the voice of Boris Badenov in “The Rocky and Bullwinkle Show.”

The cast and crew, in other words, were top-drawer. The animation wasn’t in the style of Disney or, later, Ghibli, but it wasn’t of the Warner Bros. convention, either. It more resembles that found in modern anime.

The star of the show is the music. I mentioned yesterday to mysisterthedoctor that these are songs that last. To which she replied, “Forever.”

Looking around now I expected to see this 60-year-old, hour-long television show available for free streaming, but it isn’t, though it’s available on many of the subscription services. Still, you can find many of the songs on YouTube, which I’ll link here.

What I see as the anchor song of the show is The Lord’s Bright Blessing, which comes during the visit of the ghost of Christmas-present. It brought a lump to my throat even when I was a tiny kid, because it distills a great deal of what Christmas ought to be. (And for years I looked to see if there really were such things as a razzleberry or a woofleberry — there aren’t — as well as finally understanding the meaning of the line, “a Christmas far more glorious than grand.”)

The Christmas-iest song in the show is “The Lord’s Bright Blessing,” and it’s one of the songs likely to stick with you.

We explore how Ebenezer Scrooge came to be as he is, an unloved miser whose only friend is his money, beginning early in the visit from the ghost of Christmas-past, All Alone in the World. Scrooge had once been in love, but he decided to put money first, as we sadly learn in Winter Was Warm. It is a song which has had a life of its own outside the show. It’s its romantic hit.

The ghost of Christmas-future shows Magoo-Scrooge the kind of people who would pick through his precious belongings once he’s gone in We’re Despicable. 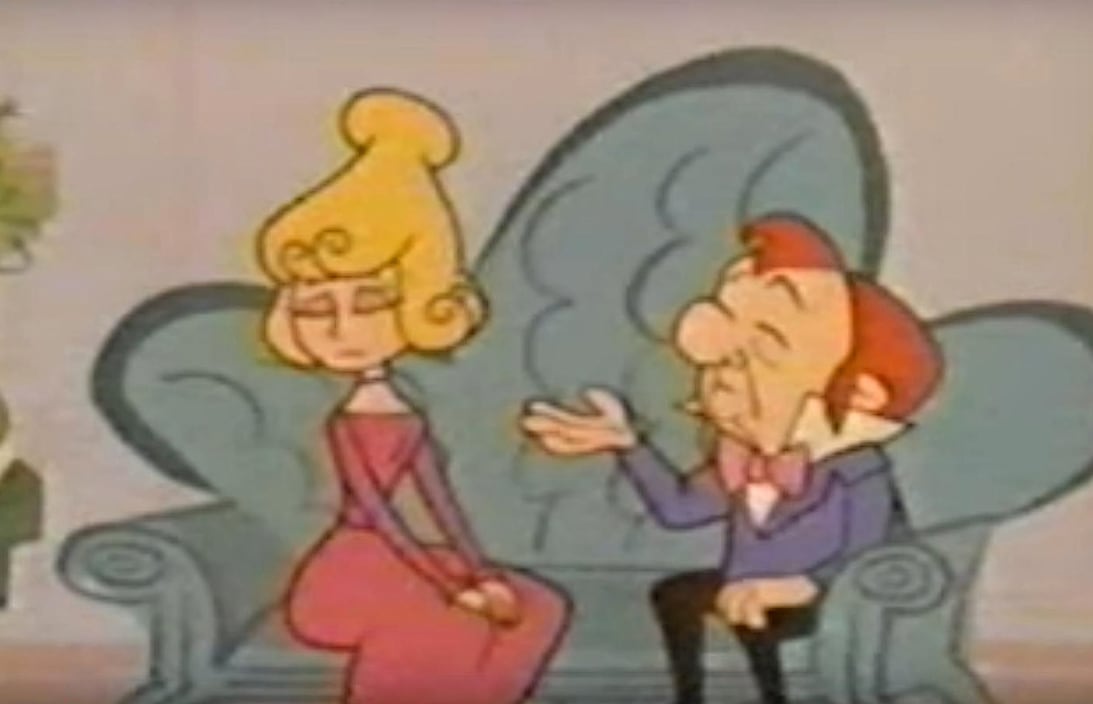 The song that has had a life outside the show is “Winter Was Warm,” which has been recorded by a number of artists. (Credit: Universal Pictures)

We know, of course, how the story turns out, and the screenwriter, Barbara Chain, handled the adaptation lovingly, inserting Magoo-ian humor as we go along. It ends with a happier reprise of The Lord’s Bright Blessing, and perhaps we cry our happy tears and remember, if only for a little while, only a glimpse, the charity at the heart of Christmas. (While at the same time being sad that such a show would certainly not be produced or broadcast now, and while remembering that many if not most of those who put together the production were Jewish.)

Those are just a few of the songs. There are many more and the story is beautifully told. (And I apologize for the awful YouTube advertisements. Google, don’t you know.)

Having seen “Mister Magoo’s Christmas Carol” as an adult, I rushed to find a copy of it so I could watch it every year. You can, too, and it’s especially worth watching even now if you’re not quite ready yet to say goodbye to Christmas for this year. (It’s one of my two Christmas entertainment requirements, the other being episode 19 of the anime “Toradora,” though I think you need to watch the whole series to get maximum enjoyment from it and especially its Christmas song in Japanese, bearing in mind that while Christmas Eve is big in Japan, it’s not an especially Christian country. Still, it’s a moving episode.)

Yes, you can find a Christmas song in Japanese in the anime series “Toradora.”

I found that it was available, inexpensively, on DVD, so I got copies for the various outposts of my far-flung family, years ago. They would surely watch it and it would become their tradition as well as mine.

But that didn’t happen.

On Christmas Eve, my three little great nephews and niece and their parents went for a celebration at my sister’s house. She thought to entertain them by playing “Mister Magoo’s Christmas Carol.” (Their parents, happy for an hour’s respite, went to sleep on the couch.)

I asked my sister how they liked it.

“All three loved it. (I did too),” she wrote back. “Although James [the middle of the three] later asked to see the McGee movie again.”

So the tradition, though it skipped a generation, may have begun. Here’s hoping.