Christmas is still celebrated, though in a largely secular form, in many cities and towns. Here's Court Street in Athens, Ohio in 2014. (Credit: Dennis E. Powell)

Was it the pandemic? Or has society’s decline increased in velocity? Or is it just me? 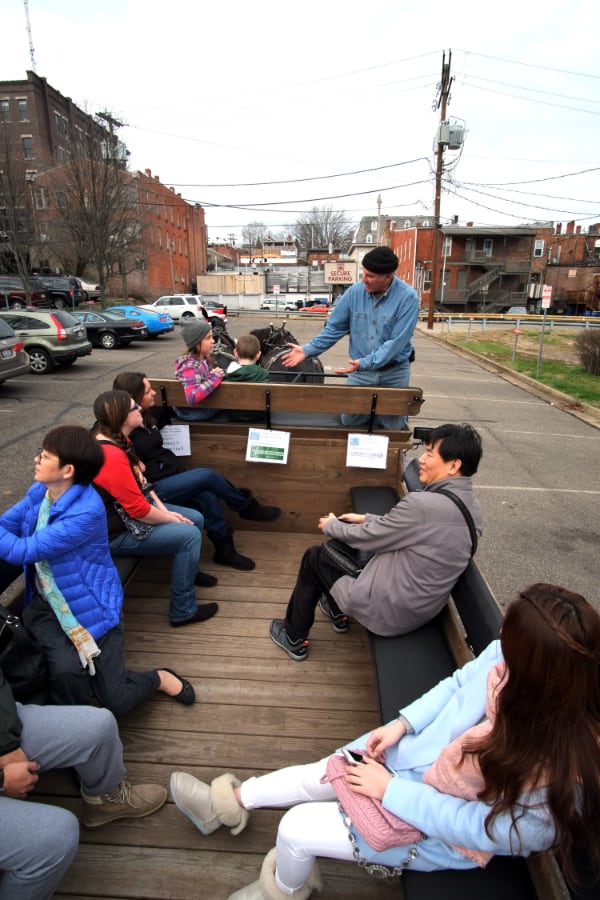 A local organization offered free rides in a horse-driven wagon around the uptown area in the weeks before Christmas, to the consternation of uptown merchants, because it consumed half the parking spaces. (Credit: Dennis E. Powell)

Christmas is close, but it doesn’t feel like it. Some of that has to do with the pandemic, I suppose, at least around here. The vague sense of being under siege remains, and the Christmas music doesn’t seem to have returned to stores, broadcasts, and elsewhere. (There may be Christmas music blaring scratchily from the speakers on poles uptown. I think the speakers may have been obtained when the last drive-in theater went out of business. I don’t know if they’re up this year because I haven’t been uptown in months. There’s no reason for me to go there, though I suppose I should have, just to update myself as to things such as whether there’s Christmas music being played.) I’ve seen people on trips to town, but I’m yet to hear the first “Merry Christmas” from anyone directed at anyone. I’ve said it a few times but the response has been either nonexistent or a grunt. Maybe this is because people now live in fear of saying much of anything to much of anyone, lest it be seen as some sort of aggression, privilege, or one of the other accusations hurled at normal people by people who probably ought to be institutionalized. (Or they could move to Canada, where the government now puts people to sleep for the capital crime of being in a bad mood.)

Yet what has been described as “the war on Christmas” has been going on for quite a while, certainly since long before 2019. And before that there was the continuing complaint over the commercialization of Christmas, which is certainly a valid criticism. Now the news stories about anything good coming of Christmas are exclusively about how well factota of the Chinese government are selling the products they manufactured through the labor of slaves or near-slaves, which products are rarely needed, usually poorly made, and forgotten within days of their having fulfilled their sole requirement: a placeholder gift that checks the box necessary for the giver to feel good about himself. I try to give (“gift” isn’t a verb, dammit!) presents that in some way enlighten the recipient, improve his or her life or his or her approach to life. But I fall short here, just as do others. If I have a little niece or nephew for whom a beloved book from my own childhood is just the right thing, there are the brothers and sisters who get something just to maintain the balance. I probably should simply send them money, but that is oh-so-gauche, isn’t it. Sending money at Christmas to those you care about is bad, but sending it to some Chinese communist slaveholder is right and expected. We don’t think it through.

Under no circumstances are we to mention that, yes, while the date is the same and the celebration descends from a nearly prehistoric pagan festival, we chose the day to celebrate the birth of Christ. In the Christian year Easter is by far the more important event, but for Christ’s death and resurrection to have taken place his birth was necessary, no? So I don’t mean in any way to minimize the holiday.

This year I won’t be going to church for Christmas. We’re expecting an ice/snow storm before the weekend and temperatures are forecast to be so low that the storm’s residue will stick around until the middle of next week (or, on my north-sloping driveway, mid May). Even if the weather were perfect, though, my taste for standard Catholic liturgy has diminished. That’s because the pope is more and more a third-world Marxist politician rather than a guardian of Catholic doctrine, which he seems to be actively dismembering. The old joke, “Is the pope Catholic?” is a joke no more. We are to pray for his intentions, but I’ve taken to praying that his intentions be limited by the Holy Spirit (or “Holy Ghost,” as we used to day; it’s cringe-worthy when some hymn — they’re called “songs” now — hits the pothole of “Holy Spirit” in a place where “Holy Ghost” fit the tempo and the poetry). Instead, I’ll partake of services over EWTN and one or more of the SSPX streams and the other Latin streams. It’s sad to say that EWTN has become a kind of commercial enterprise (which began when an EWTN officer inserted his own name as executive producer in the credits of every single program broadcast). 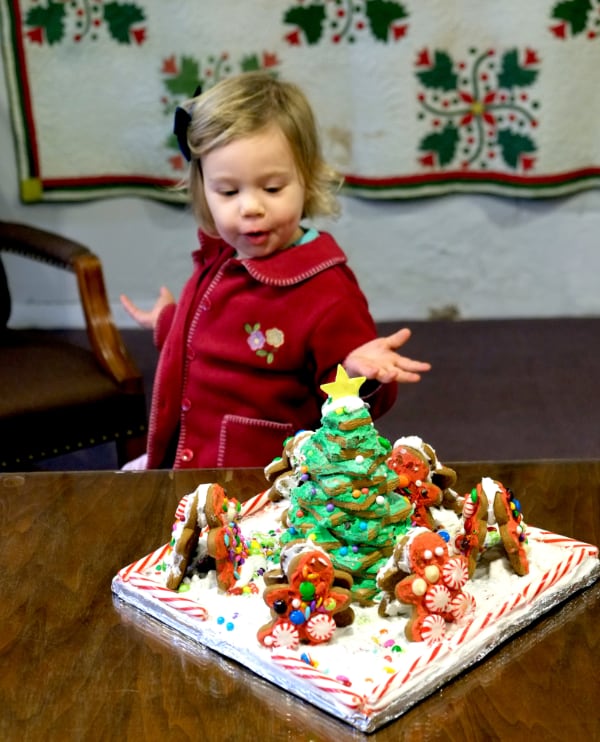 It’s a gingerbread tree, not a gingerbread house, but for this discerning young judge at the historical society’s 2015 Christmas contest, that made little difference. (Credit: Dennis E. Powell)

Alas, I’m not alone in this attitude, which applies not just to Catholics. I think that the pandemic provided for some faithful, perhaps many, the excuse to skip church they were looking for. But church — and not just the Catholic Church — has done a lot to drive worshipers away.

When I was young — I’ve told about this before — it was a real delight to attend midnight Mass at the Episcopal church in which I was raised. I’m tempted to say this was before the church became overly political, but a church founded to that Henry VIII could grant himself a divorce has been political pretty much from the start, though in recent decades it has to my mind become little other than political. Despite the best efforts of the crypto-Lutheran Thomas Cranmer (forwarding address: Hell), the Book of Common Prayer. especially the 1928 edition, is arguably the most beautiful book ever written in English. Its “Prayer of Humble Access” is loved by the faithful of many denominations. Worship had special meaning late at night on Christmas Eve, when a festively decorated and packed-with-congregants church (that looked and felt like a church) welcomed the most important infant ever to be born into this world. The priest, usually the warm, welcoming Richard Ash, had to mind his watch because at the stroke of midnight our tiny German organist, Heinz Arnold, pulled out all the stops — literally; that’s what the phrase means — and the mighty pipe organ erupted in “Joy to the World,” with all of us jumping to our feet and shout-singing. Then we went home, filled with the Holy Ghost (who had probably gone to other time zones before the arrival of the very secular Christmas morning, when presents and such were on our minds). Still, we all of us, even the very young, knew that this was about more than enriching Mattel and Hasbro. 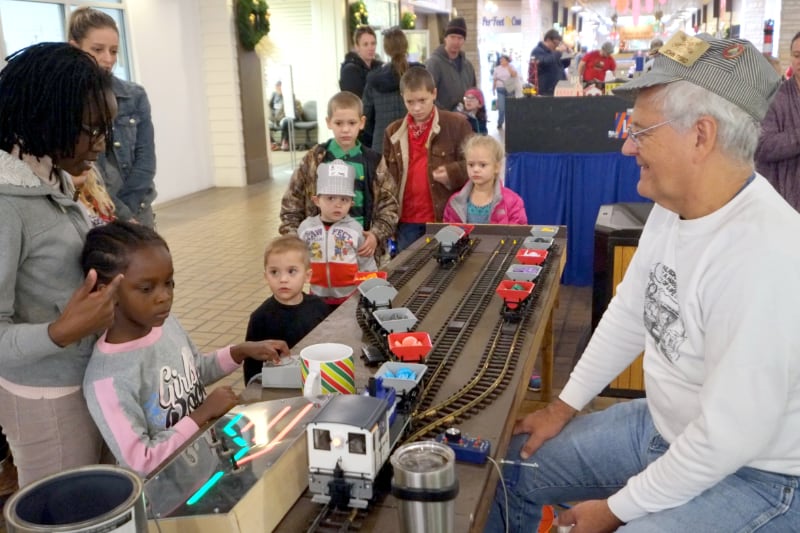 I wonder how much that kind of thing happens anymore. And whether it happens less now than it did just a few years ago.

It’s, what, 19 years since I spent Christmas with any of my far-flung family (and even then I had a desperate case of the flu, but it was lovely anyway). Here in this little wooded part of the world I made friends, and Christmas (and other holidays) with them became a tradition. No more. The pandemic put the kebosh on it, but so have things like divorces and deaths and relocations. The proceedings were hosted and lorded over, respectively, by Mary and Nelda, usually in the latter’s giant living room in a building that used to be the company store of a coal-mining company (surely popular in years past by the parents of bad little boys and girls). Then came the year that after Christmas dinner I drove down the mostly dirt road to Mary’s quirky house (money ran out before the stair to the front door was built, for instance, so it opened, from the second floor, onto a 10-foot drop). I was going that night to see her as she lay dying of cancer. 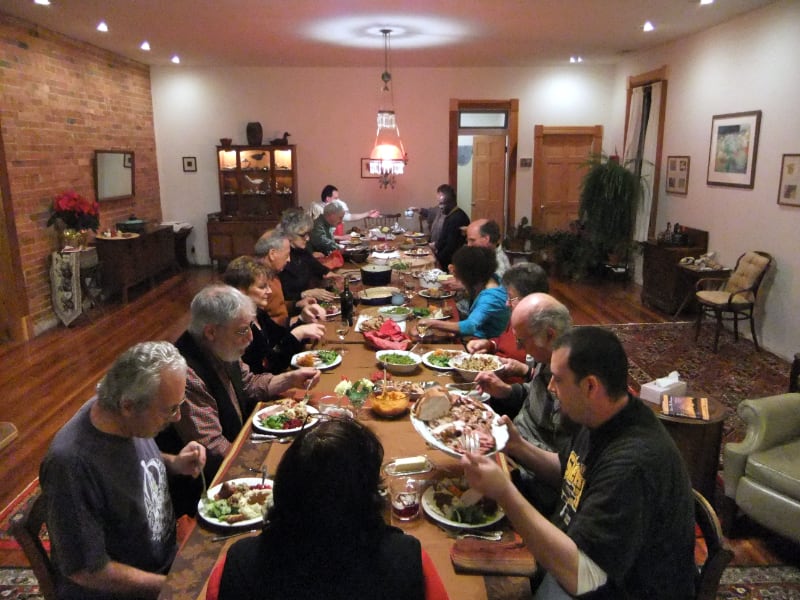 Nelda, who had been a friend of mine for years before she sponsored my entrance into the Catholic Church, fell down a couple of years ago — she was, I think, 93 at the time and no, it was not from Mary’s front door — and broke her hip. Thus begins the ending of many lives, including hers. She died in early April of this year.

There were others, people I considered and consider friends, who were part of the extended holiday family at Nelda’s place. And I’m sad to say that I’ve neither seen nor spoken with any but a very few since the before times. They seem to have moved away, changed their email addresses — I hope that’s all it is — and I don’t know that I could find them without a lot of effort. (I haven’t moved or changed my email, so I can be easily found — maybe it’s not them, it’s me. Oh, well.)

I think that the effect of the pandemic on Christmas has been to accelerate something that was already well underway, and that’s a double shame.

But perhaps it’s an opportunity, too, to return to basics and remember what it is that we’re celebrating, which isn’t black Friday or how we mustn’t ever say in public anything that might offend the delicate atheistic sensibilities of people whose next thought will be their first.

Let’s all remember what this is all about, and celebrate it deep in our hearts.