If you’re less than 50 years old, your entire life has taken place in the time since a human being walked on the moon.

This to me is a scandal. It is our nature to explore and from new places explore further, not to touch a new place then scurry home. It isn’t entirely unprecedented — probably the most famous example is when the Vikings sailed to Newfoundland, discovered that their watches were off by half an hour, and retreated. It should be noted that there aren’t any Vikings now, though it is believed that their origin, Norway, still exists.

It usually goes the other way. After Columbus landed in what he thought was Asia in 1492, there began a steady stream of explorers from numerous European nations. Many of them looked upon the New World as obstacles preventing one from easily sailing to Asia. (And that was before there were iPhones to be had if only China could be found. By the land routes of the time, a new model would already be released before any of them could be gotten from China to Europe, which caused the Great Lightning Charger Famine of 1502, so the Europeans said hell with it and invested in something safer — tulip bulbs — instead. Okay, I did make up all of this parenthetical fantasy. Well, except that there were no iPhones at the time, which is to say that cellular telephone service where I’m sitting was as good then as it is now. Also the whole tulip bulb mess. That much is true.) 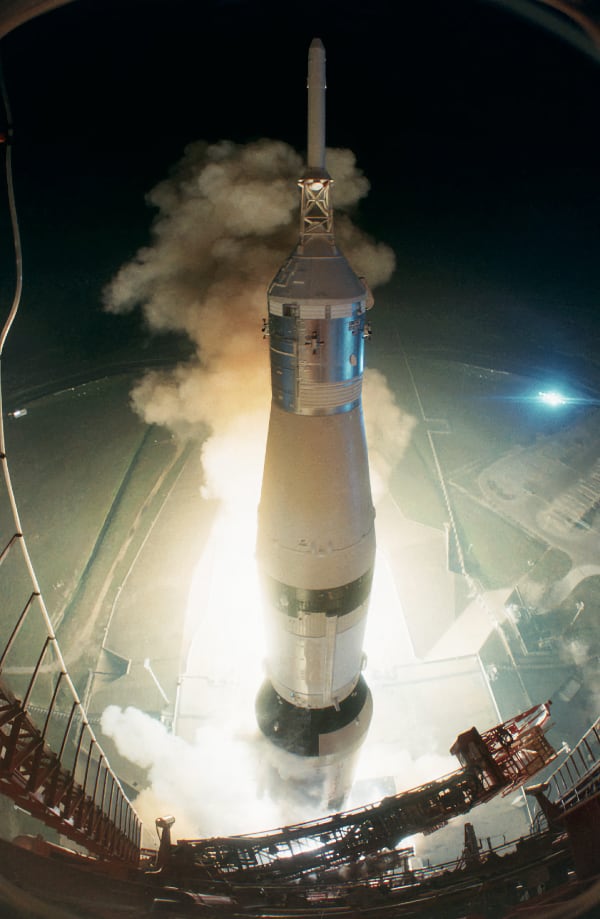 The last time we launched a manned mission to the moon. (Credit: NASA)

But we live and for some time have lived in an age not of exploration but of politics, with government-sponsored exploration taking place only when it has a political motive. It can be argued that it has it ever been so. It is true that Ferdinand and Isabella sponsored Columbus, but they were not driven solely by altruism. They were up to a lot. They were engaged in driving the Jews from Spain and they were the force behind the Spanish Inquisition. These things are scarcely political inactivism, and they were expensive. If this crazy Genoan Cristoforo Colombo really could do as he claimed, it might make a lot of money that could help pay for the Spanish monarchs’ European adventures. (And Samuel Eliot Morison, in his excellent “Admiral of the Ocean Sea, ” reminds us that Columbus himself undertook his exploration not to become a rallying point for proto-woke loons centuries hence but to achieve riches sufficient to retake Jerusalem for Christendom.) Likewise, it was desire for wealth, power, and influence that compelled those who followed Columbus.

Nearly five centuries later, Richard Nixon didn’t see much political capital in the moon. I don’t think it’s unfair to say that Nixon resented the moon. When Apollo 11 astronauts received a phone call from Nixon while on the moon in July 1969 (which had better wireless phone service then than I do now, but they weren’t on T-Mobile), on television Walter Cronkite was talking about how sad it was that John F. Kennedy wasn’t around to see this day. It was actually possible, a stretch but possible, to feel sorry for Nixon at that moment.

Kennedy had made his big moon speech at Rice University in 1962. He boldly called for America to send a man to the moon and return him alive to earth before 1970. This, too, was politically motivated, seeking to steal the headlines from a multitude of crises, and in that uniquely hopeful postwar world of possibilities it worked. After Kennedy was assassinated the moon program became kind of a memorial to him. 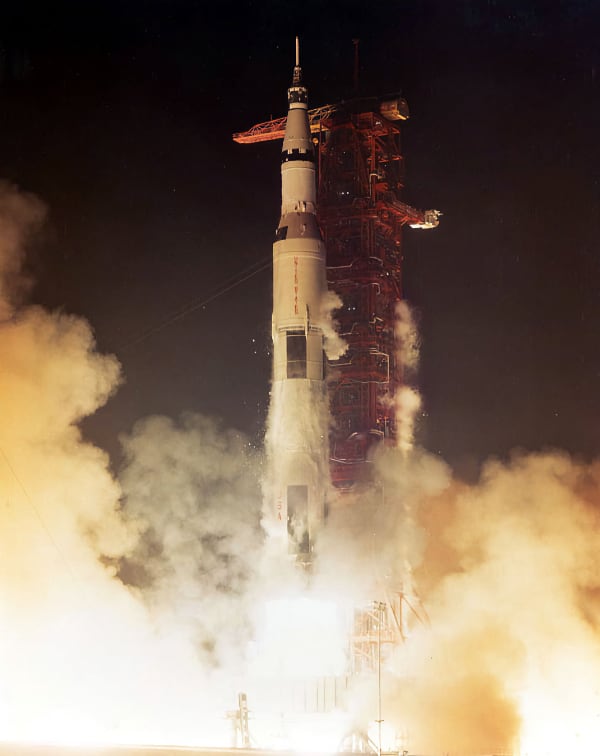 In a life richly populated with them, one of my major regrets is not having been present for the night launch (actually, morning launch — it took place at half past midnight) of Apollo 17 on December 7, 1972. I know people who were there, and according to them the word spectacular doesn’t begin to describe it. The most magnificent rocket ever, the mighty Saturn V, rose into the dark sky and illuminating most of the Florida coast, its roar resonating in one’s very bones. It was one of the most terrific things ever done by people. It is unmatched and will so remain.

There were three additional Apollo lunar flights planned, but they got canceled. Going to the moon didn’t result in votes but did result in considerable expense. That abandoning a place we’d fought hard to visit was in the minds of some of us a grave national dishonor didn’t affect the fact that going to the moon had lost its lunar luster. And it wasn’t as if we wouldn’t quickly follow it with additional, graver national dishonors, carrying right up to the Biden bugout from Afghanistan. No, if anything the abandonment of the moon meant that an administration could get away with pretty much anything (though not absolutely anything, as Nixon himself would learn less than two years later). We would keep some semblance of a space industry going via a low-earth-orbit thing called the Space Transportation System, or “space shuttle.” If going to the moon had been bold, the space shuttle was expensive, mostly useless, and stupid.

Anyway, it came to pass that on the evening (our time) of December 14, 1972, Jack Schmitt and Gene Cernan climbed back aboard their lunar lander, pushed the button, and left the moon. Humans haven’t been back since.

To me that is a crime. But I had the opportunity to discuss it at some length a few years ago with Schmitt, who was more forgiving than I am. He said that history shows other periods between discovery and permanent habitation, and that exploration continues when there is a political, military, or economic justification for it. I agree with that part. What’s more, he believed he had found the economic justification for going back to the moon and staying there. 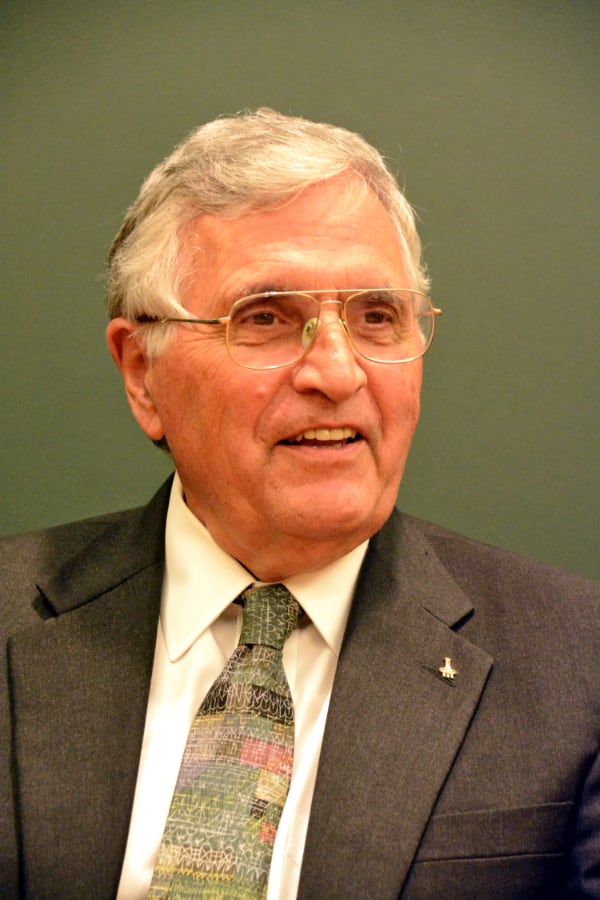 Harrison H. “Jack” Schmitt was Apollo’s only lunar scientist-astronaut. Trained as a geologist, he believes that the moon can be the source of great resources, particularly something called “Helium-3.” This substance, it turns out, is excellent fuel for nuclear fusion, about which we’ve been hearing a lot lately. Going to the moon and collecting helium-3 would more than pay for itself, he said.

A few days ago the first unmanned test of what NASA’s currently up to completed a trip around the moon. The test, which was apparently successful, was greeted by yawns when it was noticed at all. Soon, we’re told, it will carry the first woman, the first person of color, and who knows, perhaps the first trans-sexual luggage thief to the moon and maybe back, according to Joe Biden, the senile idiot engaged in proving that the President of the United States isn’t actually very important after all but for the mischief he can cause. So there’s no problem with no one much noticing the launch and return of NASA’s “Artemis” flight — the president himself has pretty well announced that the whole thing is a stunt.

Which is important, though not for the reasons you’d think. Biden has effectively taken the federal government out of the space exploration and exploitation business. That work has been handed to — no, taken by — those who know why they’re doing it. When we return to the moon for serious reasons, it will be under the aegis not of some demented clown in Washington but instead the likes of Elon Musk, Jeff Bezos, and others of their ilk, the new robber barons and industrialists who are in it not for the politics but for the money and clout.

I’m just sad that it took half a century to happen.