The Blue Light Is Not Special!

Have you ever encountered law enforcement — local police, state trooper, whatever — at night? If you have, and you’ve been in a locale where both red and blue flashing lights are involved in police activities, you might have noticed that blue light seems brighter and is not friendly to your eyes.

If you’re driving and a trooper with red lights on his rooftop pinball machine seeks to pass you, it has little effect on your vision. Despite its brightness you’re not blinded by it. If the officer has blue lights, though, it’s as if a blue atomic bomb went off in your back seat and it takes a while for your vision to return to normal. Even though on paper both colors are of the same brightness.

Our eyes react differently to different colors. I have two small LED flashlights on my keychain. One is normal white light while the other is red. When outdoors at night, I invariably use the latter. Why? Because red light doesn’t disrupt my night vision (nor would it yours). The white light, because of its blue component, ruins night vision and you need to readjust to the darkness all over again after turning it off, which is why the white-light device is what I use in searching for something that I think has rolled under the couch, not outside at night or in circumstances where I need to function in darkness.

The flashlights pilots carry in their cockpits and the lighting for much in sailing is red for the same reason. Turn on a white (or, Heaven help us, blue) light in the cockpit or on deck and you’re effectively blind when it’s on and for a while after turning it off.

These are interesting data, but I don’t bring them up for no reason. The Chinese electronics — but I repeat myself — industry seems to be in love with blue LEDs. It is true, they are striking to look at. That’s the problem: we don’t need striking illumination.

That point came home especially vividly when I replaced the humidifier in my bedroom. Humidity is important, especially in the winter months when it drops in our homes. It’s important for the woodwork and furniture, it’s extremely important for guitars and other wooden stringed instruments, and it is crucial if dying in agony from the flu is not on your to-do list. This has been known for a while.

For example, at a level of 45 percent humidity or above, the influenza virus cannot survive in the air longer than about five minutes. That’s part of why the flu is so virulent in the months during which indoor humidity falls well below that figure.

When it gets cold, out come the humidifier and the vaporizer. (The latter is a humidifier that uses heat to create humidity by turning water to steam. It uses more electricity and can get clogged by impurities in your tap water.) I’ll close the drain when I shower and won’t drain it the accumulated water until it has been allowed, door open after the shower, to fog up as much of the house as it can. I’ll probably make one of the contraptions that captures humidity and heat from the clothes dryer that would normally be vented outside. You may have noticed that heat has gotten expensive, and heating the outdoors in winter is a losing proposition.

That was a digression, but I think a worthwhile one.

I got out the humidifier and soon discovered that this year, after probably 15 years of faithful service, my Holmes HM630 humidifier was dumping water all over the floor. Close inspection revealed that its water tank has developed many fine cracks. I do not know how or why now, but I do know that replacement tanks are not available. So much for a “waste-free society,” huh? 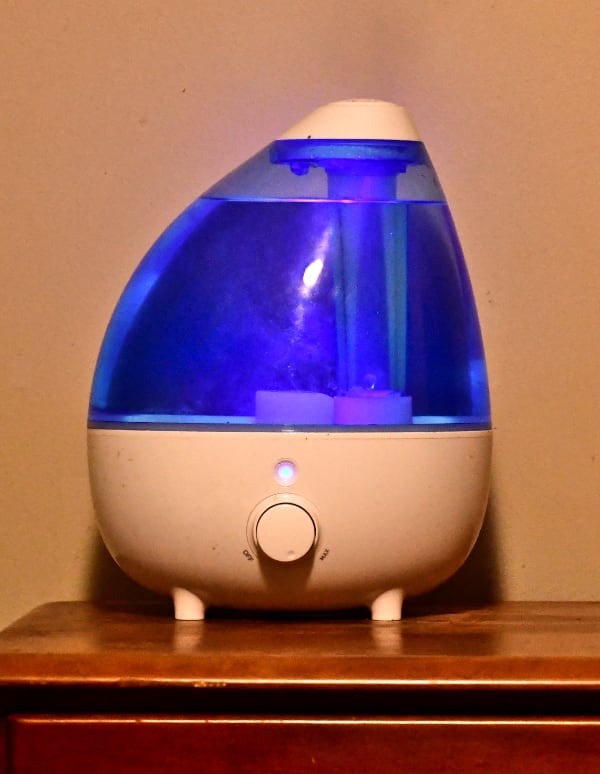 Under normal light, that blue LED doesn’t seem very offensive on this little humidifier. Certainly not as offensive as the strangely shaped water tank that’s a real juggle when it’s wet after being refilled. (Credit: Dennis E. Powell)

So I replaced it with a much lesser model from some no-name Chinese outfit. It does the job except that it puts less water into the air, lacks the Holmes’s soothing fan sound, has a teardrop-shaped tank that is really difficult to maneuver when it is full — no handle! — needs to be refilled more often, has no humidity sensor, and surprisingly worst of all has a blue LED in its power button.

We can readily go to sleep if there are red LEDs shining, because red light isn’t hard on our eyes. But blue LEDS can really mess up our attempts to get some rest. I’ve cast away LED alarm clocks when it turned out their light was blue. It’s an experiment you can do: go into a dark room with a clock that has red LEDs and spend a little while. Then do the same with a clock whose numerals are blue or something else that makes what seems to be only a small amount of blue light. After a while the room will seem bathed in blue light, and there’s nothing pleasant about it.

In the case of the humidifier, the LED in the power button seems subdued, not at all bright. But after 15 minutes or so when it and the (red) alarm clock are the only illumination in the room, the blue has taken over and restlessness is the result. The much brighter red-lit alarm clock had no such effect, even though they were both on. Our eyes like red light better. 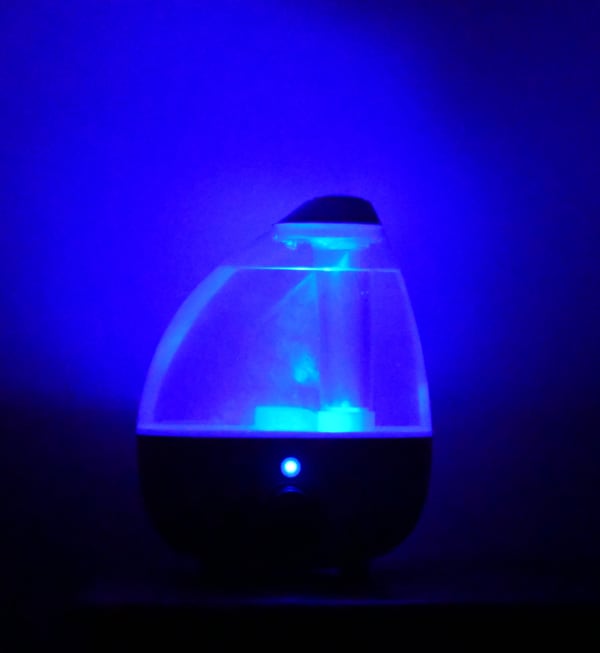 Ah, but turn off the lights and wait a bit for your eyes to adjust. This is what the room will now look like. (Credit: Dennis E. Powell)

Yet manufacturers are in love with blue LEDs. If you get a window-sized air conditioner, you can bet it is festooned with blue LEDs. Radio? Same thing. Electric fan? It. too. Maybe they’re cheaper than red ones. My guess is that after a long period during which most all LEDs were red, it was thought that blue ones seem more modern.

It’s gotten bad enough that I invested in a roll of red plastic tape to paste over the offending displays, even though it sometimes renders them useless — accidentally proving they weren’t necessary in the first place.

(Some companies are noticing the evil of blue LEDs: Apple has a warmer, blue-reduced mode for iPads and iPhones that can be set to trigger at user-defined times each night; likewise some of the makers of Googledroid phones, for which there are apps that do this, anyway. There probably would be for BlackBerry phones if BlackBerry hadn’t told its customers to pound sand; the poor Sailfish OS people have a system built in Finland with Russian investment, so our sleep is not their governing problem.)

Why bring this up? This is the time of year when we spend like crazy people and I mention it in hope of imparting just a smidgen of sanity to the process. We’re buying gadgets as gifts. It’s good to check and make sure that these devices aren’t infected with blue-LED disease (it is even possible to have gadgets with no LEDs at all — fancy that).

It’s worth it, I think, to campaign against blue LEDs. Alternatives are possible and desirable.

Or maybe I’m overstating the value of things like sleep and vision.