The weather has been abnormally, almost alarmingly warm around here the last week or two. There were a few days earlier when it got down to the teens at night, but it hasn’t hit freezing here since before Thanksgiving.

Anyone who has lived for a while around here — actually, anywhere, I suppose — knows that nice weather always has a cost. It can be paid off gradually, but more frequently it’s balance due, all at once. Sometimes, especially in the South, eviction can result.

The wind had been forecast, as had strong thunderstorms. We didn’t get any of the latter or else I slept through them — not like me — but the wind took up the slack. It was so strong that the water in the toilet was swaying back and forth as the wind blew past the roof vent pipe.

Wind is a source of concern here. Next to the driveway, at the edge of a steep 15-foot slope, is an enormous sycamore tree. There are many sycamores in this part of the world, which is nice for shade in the summer but otherwise generally awful. Sycamores will sprout almost anywhere. I have to clean my gutters annually and always find they are full of young sycamore trees, growing on rotting sycamore leaves. Practically any other species would be far more welcome: sycamore wood isn’t good for much of anything, even firewood. It is irritating to the skin and lungs of those sensitive to it. I don’t know if it’s an allergy, but it might be and if it is it’s a common one.

If the tree were walnut — I have some of those, too — or just about any other kind of tree, I’d have people eager to come round and cut it down and pay me for it. No one wants sycamores and it would cost me a lot of money to get it cut down.

Why not just leave it? Well, there are the leaves, probably a ton of them, that cover the driveway, the car, pretty much everything. These get very slippery when they’re wet, and the driveway is steep, so in autumn and winter just going to the mailbox is an adventure. I could rake them, but then what? Burning is ill-advised around here this time of year. If piled up they’d just blow around. And I absolutely will not put leaves in plastic bags to be carted away by the trash people. That’s just wrong. I wish I hadn’t given away my wood/leaf shredder when I moved here, but I did.

The prevailing wind here is from the northwest, and my house is to the southeast of the big sycamore. Given its precarious footing (rooting?), the right wind would send it onto my house, which I figure it could easily crush. In the summer, when storms are predicted, I sleep in the part of the house most distant from the thing. Fortunately, last night I wasn’t worried — the wind was from the southwest and the leaves are already gone, anyway. The difference between a tree in full leaf and one in late autumn or winter is the difference between a sailboat with sails flying and one that has them furled. 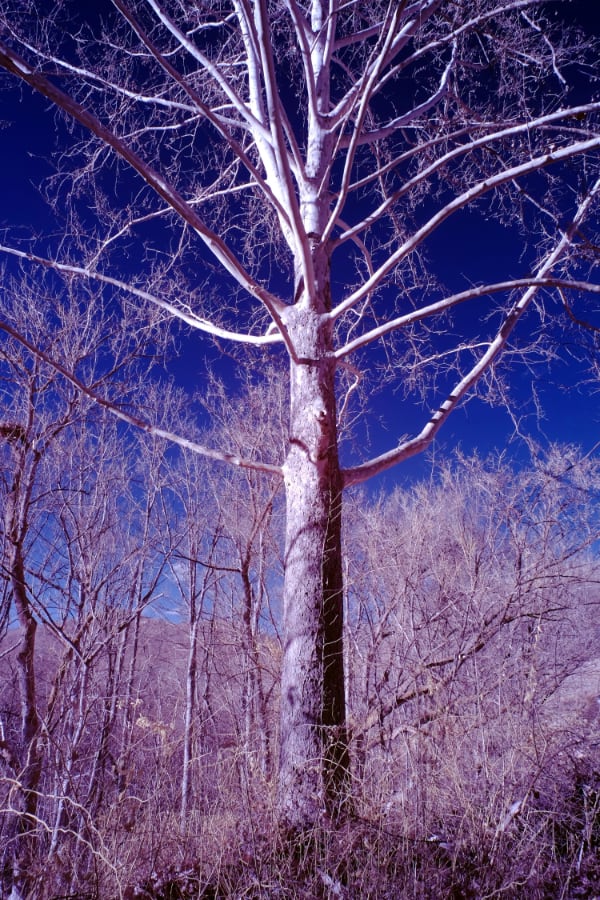 Here’s my worthy foe, the mighty sycamore photographed this afternoon after the storm had passed. It’s nearly 30 inches in diameter, and there’s a sheer dropoff on the other side. It’s shot in infrared because I think it’s pretty. (Credit: Dennis E. Powell)

No, in late autumn and winter the tree is up to other mischief. It bolsters its root system. Next to the dropoff, it has little opportunity for growth on that side. It makes up for it elsewhere, chiefly involving the four-inch, thick plastic pipe from my house to the septic system. This pipe is supposed to be impervious to roots, but the sycamore seems unaware of that specification. Beginning in early autumn I need to dump a pound or so of rock salt into the cleanout each week. This washes down to the roots and makes them terminally unhappy, such that they rot away and the drain is clear. It is said that insanity is doing the same thing over and over, expecting different results. If that is true, the big sycamore is barking mad because every autumn the roots are back, which I usually discover when I find I have a terrible mess to clean up. (The old clothes involved in that project do go into plastic garbage bags and get hauled away.)

Here’s a product recommendation: the bladder-type drain de-clogger that screws onto the end of a garden hose. It’s like a balloon. You use it by shoving it and the hose down the drain as far as you can, then turning on the water, which causes the balloon to inflate so that it now fits very tightly in the pipe. Then the water streams out a small hole at the front, at pretty high pressure. I’ve not had a clog (so far, I say, tempting fate) that could resist it. Once the clog is cleared it should be allowed to continue squirting for a few minutes, just to make sure you’ve done more than poke a little hole in the blockage. The main precaution is that you make sure the little bulb/balloon is past any place the water could go other than where you want it. Otherwise you could end up with a basement or shower filled with the stuff the pipe is there to eliminate. The hose-attached de-clogger won’t break through roots, at least not until after the salt has done its work, but it will wash away any collected, um, nutrients.

Back to the gutters. Without the sycamore they’d be less of a concern. And sycamore leaves turn to mud pretty quickly, which is good on the ground but not in the gutters. The seedlings love it, though.

This year I got some accessories for the pressure washer. One is a fitting that allows me to add to the stream whatever water-soluble soluble substance I want. I think it may have been made with car washing in mind, but the pressure washer is so strong it can strip paint, so I don’t think I’d care to use it for that purpose. Instead, I charge it with some borax and a little detergent advertised as being the product to get when you have oily ducks, and wash down the house, which is extremely easy with the pressure washer. The combination of the soap and the borax gets the borax into and under the wood, which it protects, and is deadly to insects who want to make my home their home.

The other accessory, the one significant to our discussion, is a set of extensions and odd nozzles. These when assembled extend the pressure washer’s reach by 12 feet, then let me shoot high-pressure water sideways in either direction or both at the same time. The gutter closest to the sycamore is (of course it would be) the house’s highest at 16 feet. I have a ladder long enough to get there but am now too chicken to use it. (I’ve learned over the years that it doesn’t take very long to cause damage that can never get fixed.) But this extension lets me reach even that very high gutter from the ground. The second time I used it I wore my Black Diamond sou’wester hat and my foul-weather gear — glad I kept ‘em when I moved inland. (I’ll not describe the scene the first time I used it, without the protective garments.)

Water at very high pressure attacking a gutter full of leaves, mud, and small trees is a joy to behold during the few seconds before your eye protection becomes opaque and you’re working by feel.

Anticipating the bad weather and likely resultant intermittency of power, I rushed yesterday to finish and send a book proposal that has taken up much of my time for a year now. (The power didn’t go out but for a blink or two, not even enough to discombobulate the clocks, and of course I’ve been worrying since that the proposal probably could have used another reading for typos and such, though it was sent to my agent and not a publisher, and my agent is good — overly good I sometimes think — at marking up my proposals and sending them back for repair.) If the book sells for even a fraction of what I hope, there will be a new roof, a metal one this time, and gutters, a truly impervious pipe to the septic system, an efficient heat pump, some money for the tree removal people and, if it sells for a much bigger fraction of my unrealistic expectations, maybe a couple kilowatts of solar cells on the new roof and those big, flat slab batteries that are a whole-house uninterruptible power supply. Hey, I can dream. (Prayers for the book’s publication are not just welcome but eagerly sought and desperately needed.)

I was going to end by saying that I’m heading out now to fetch the mail and search for the trashcan — did I mention that it was windy here overnight? — but I looked out the window and the trashcan is still there. The trash guys are considerate.

So things are looking up already.