Thirteen years ago, before it was deliberately changed to “Doctor Who Cares?” there was a special one-shot episode of “Doctor Who,” entitled “Planet of the Dead.”

It was good, as any show with David Tennant in the lead role tends to be. Michelle Ryan was excellent as Lady Christina de Souza, and I think I was not alone in hoping she was destined to become the Doctor’s companion. (Alas, it didn’t come to pass.)

It is possible and it would be fun to go on for a few thousand words about that once-great show that has now been ground to goo under the heel of wokeness, and maybe one day I’ll do that, but not today. There’s something more interesting afoot.

In “Planet of the Dead,” the monsters were strange, swarming creatures that looks like the average of trilobites, scorpions, and horseshoe crabs. Oh, and they could fly and as they did so they generated a magnetic field or some other electrical phenomenon that allowed them to open wormholes and travel from planet to planet. Problem was, at each planet they would devour everything, leaving it a lifeless hulk. Could they — the Doctor, Lady Christina, and the other passengers on the London city bus that had gotten sucked through a wormhole to the planet — come up with a way to escape? (Your guess will be accurate.)

There’s a reason I bring this up, and it’s this: something a little like that is happening here, right now, on Earth. No, not an invasion by extraterrestrial monsters intent on consuming the planet (as far as I know), but instead swarms of flying creatures producing electrical activity capable of causing mischief.

What are these swarming dynamos?

Bees. Ordinary honeybees. I was surprised to learn of it, too, but it’s apparently true. 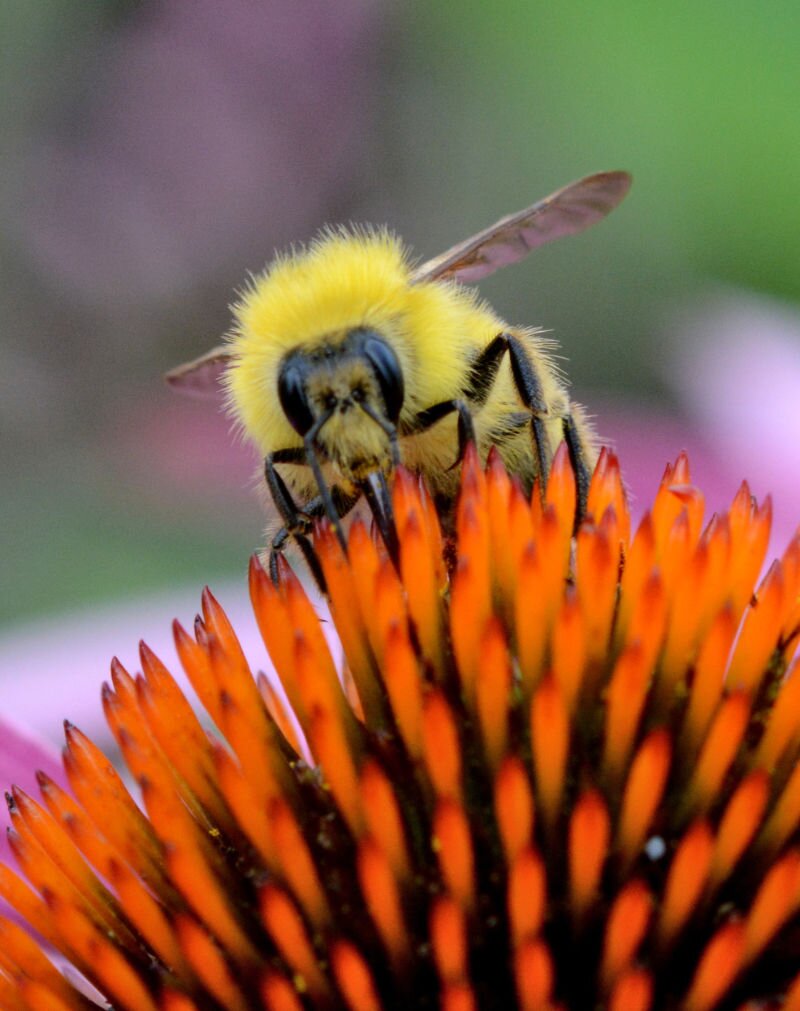 Just had to include this. It’s a “cuckoo bee,” scientific name Bombus perplexus, that’s related to bumble bees but its hairs are all yellow, no black. You don’t often see them. (Credit: Dennis E. Powell)

As the tale is told in New Scientist, Ellard Hunting of the University of Bristol was minding his own business, which on this day was to track weather. Unfortunately it seemed at first but fortunately as it turned out there was no weather to track.

Ah, but why, then, did the instruments detect electrical activity of the sort you’d associate with thunderstorms and dust storms? What was going on?

Though the practice has become ever more rare, there are still some scientists who observe something unexpected, even if it’s outside their precise field of study, and whose curiosity is piqued such that they investigate the peculiar phenomenon until it is explained to their satisfaction. One of my favorite stories of scientific heroics is how Dr. Michael Zasloff, a geneticist, noticed that laboratory frogs that ought to have gotten terrible infections instead remained healthy and as happy as frogs. He was chief of the Human Genetics Branch of the National Institutes of Child Health and Human Development, and was especially focused on the terrible genetically transmitted lung disease cystic fibrosis. That work involved opening the bellies of African clawed frogs, removing their eggs, fiddling with the eggs, then putting them back in the frogs, sewing them up, and popping them back in their aquaria, African clawed frogs being totally aquatic. The frogs’ wounds never developed infections, which is unexpected given the non-sterile aquarium water. Why? Zasloff wondered.

Though he was the head of a division, Zasloff soon could be found on nights and weekends at the lab bench, and after testing a great many compounds and substances found in frogs he was able to isolate a couple of polypeptides — short chains of amino acids — that had strong antibiotic effects. These substances, not toxic to higher organisms, were murder on just about any invading microbe.

(Conversely, one of my favorite examples of government regulation gone wrong is how the Food and Drug Administration put the kebosh on development of these miraculous molecules into useful products that could help people. As the saying ought to go, “Hi, we’re from the government and we’re here to help . . . the government.”)

The Washington Post reported at the time, “The story of Zasloff's discovery of magainins is the kind of scientific detective tale seldom found in modern research. It is the story of how a single, elegantly simple observation led, with a speed rare in science, to the unfolding of a brand new area of animal biology. It vividly illustrates Louis Pasteur's dictum that in science, ‘chance favors only the prepared mind.’” Our schools and other institutions are not nowadays much interested in helping minds prepare for what they might observe. They’re now chiefly concerned with indoctrination, that students and everyone else think how and what they’re told to think.

So it was refreshing to me and unexpected to learn that instead of saying, “Well, no storms, let’s go home,” Hunting and his crew decided to investigate the seemingly anomalous electrical activity.

What they found was that the electricity came from swarms of honeybees.

It’s long been known that there’s an electrical connection involving bees. For instance, pollen sticks to bees because bees have a positive static electrical charge, while grounded flowers are negatively charged. The bees obtain their charge by flying, as their wings rub, in the same way that you can rub a balloon against a cat’s fur or your own hair and give it a static charge that lets it stick to the ceiling. In fact, their opposing charges may help direct bees to flowers. In that case, it’s the effect of static electricity on the hairs on the bees’ bodies. 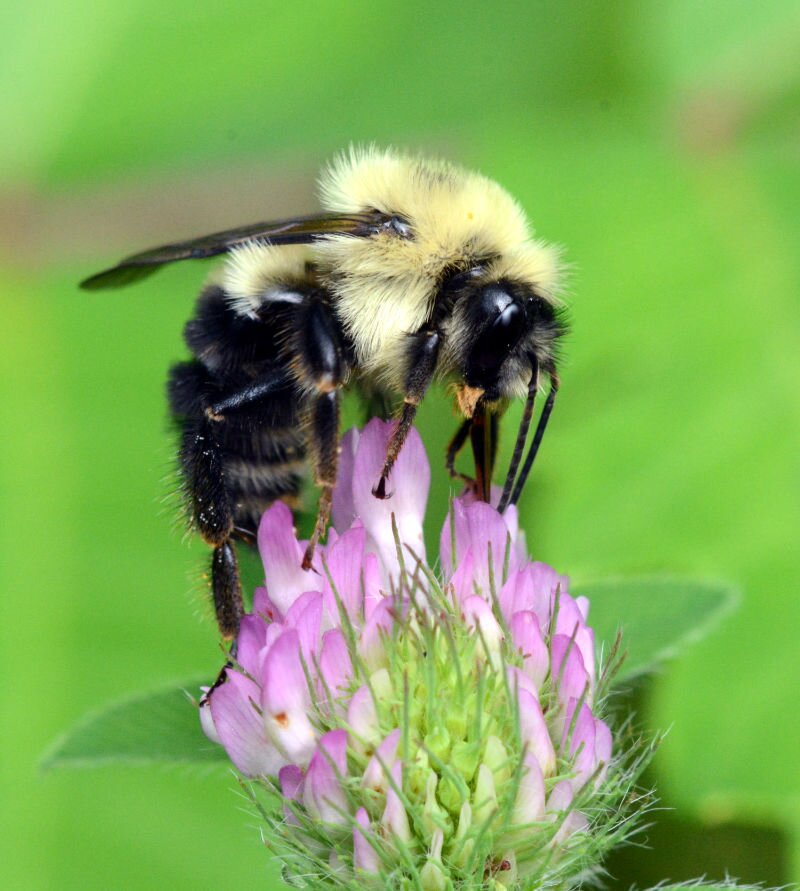 If the hypothesis is correct, it was a static electrical charge that led this bumble bee to the clover. (Credit: Dennis E. Powell)

It’s even hypothesized that bees use electricity to communicate.

What hadn’t been known until Hunting and his people discovered it is that it goes beyond the individual bees. There is a collective electrical charge when there are many bees flying together. The more bees, and the closer they are together, as in a swarm, the more concentrated and powerful the charge is.

“Hunting compared the bees’ highest charge to previous data on meteorological events like fair-weather storm clouds, thunderstorms and electrified dust storms, and found dense bees swarms outcharged them all,” noted the New Scientist report. “Their charge density was around eight times as great as a thunderstorm cloud and six times as great as an electrified dust storm.”

This suggests that if you had a big enough, dense enough swarm of bees, you could actually get lightning. Something to ponder, though not something to worry about.

Awaiting further study is how many bees it would take to open an actual wormhole so as to reunite the Doctor and Lady Christina and put them on a different, more entertaining course. 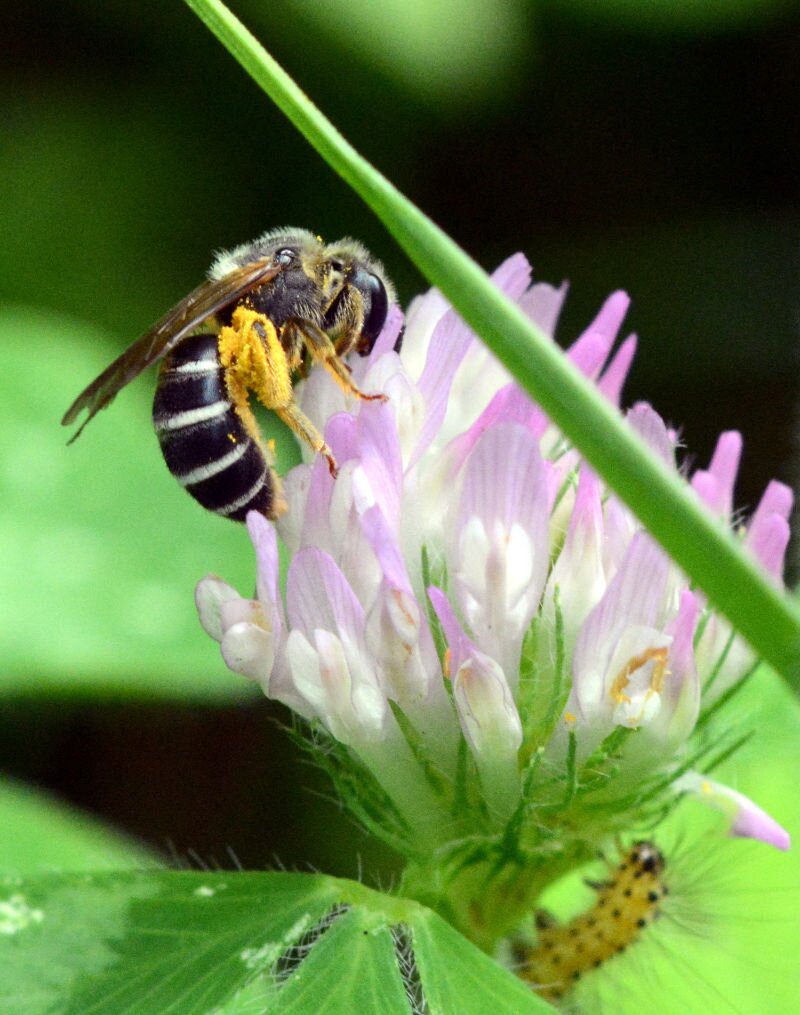 It is static electricity that holds the pollen to this honeybee, we’re told. (Also, the pollen can be kind of sticky. Though maybe that’s static, too.) (Credit: Dennis E. Powell)

Utterly unrelated, but too good not to mention: It’s easy to despair nowadays. Conditions in the world are not good. Our politics have descended to the point where mental impairment is the most prominent plank of the Democrats’ platform, while megalomania is big in an unfortunately large part of the Republican party. The question “Is the pope Catholic?” is no longer a joke. The handbasket is in the station, preparing for departure to you-know-where. So it’s important to share hopeful, pleasing things when we find them. I’ve found one and it is the kind of thing that will almost certainly cause you to burst with pride in a bunch of kids a half a world away.

I defy you or anyone to find a marching band better or cooler or cuter than the Kyoto Tachibana Senior High School Band (motto: “Always Here”). These kids do the impossible, all the time. They do not embrace the Japanese aesthetic concept of wabi sabi, or beauty in imperfection. They are unbelievably precise. They’re like the Rockettes if the Rockettes had to play their own instruments. And we’re not talking some big-money-football-program college, but a high school in Kyoto, Japan. The band, made up mostly of girls, has in its 51 years traveled around Japan, Asia, and the world — even to the Rose Parade in Pasadena and earlier this month to perform stunningly at the Taiwan Day festivities in Taipei — being so good they bring a tear to the eye.

So when it all seems just too much, say a quick prayer and then click on one of the links above, or just to a search on the band’s name, and escape what’s mundane and instead take in what’s surprisingly possible. You might get addicted, but it’s a good and hopeful addiction to have.