Deer are fine deep in the woods. In the yard or on the road? No, not fine at all. (Credit: Dennis E. Powell)

Had It With Deer

I was headed to the store when, out of the woods on my left, a deer appeared. Again. It ran in front of my car, again, and I slammed on the brakes, again.

There’s always that moment, magnified by the mind’s ability to slow time so that every second is a million instants, of wondering if the deer was fast enough, or I was, and I’d manage to avoid hitting it. Usually it’s a narrow escape.

Not yesterday afternoon, though.

In the 17 years and change that I’ve lived here, I’ve had three collisions. They’ve all been with deer.

The first was in November 2005. I was driving my then-new Honda Element home from a concert on Saturday night. I saw the small herd of does in the highway ahead and slowed down. They wandered to the right, off the road. I relaxed a little. Fortunately I wasn’t back up to speed when the buck bounded into the picture. I hit the brakes, which probably saved my life. The antlered monster had been leaping along, and if I’d hit it a thousandth of a second sooner it would have come through my windshield. That kind of thing seldom ends happily.

As it was, I remember — the mind’s facility for separating a second into many parts again — the deer’s hooves hitting the ground just as the front of my car reached it. It’s a very strange feeling, hitting something kind of soft but heavy. In that case, it was followed by a bumpity bit as at least the front wheel on the driver’s side ran over the thing. I pulled over. The damage was pretty bad, with one headlight repositioned to keep me informed about the ditch on the right. It was driveable, though, so I continued home. The offending deer, meanwhile, had disappeared, though there was a big splotch of blood on the pavement. I was fine and I thought I was unshaken, but for the first and only time I drove past the turnoff to my house, so maybe I was a little rattled. 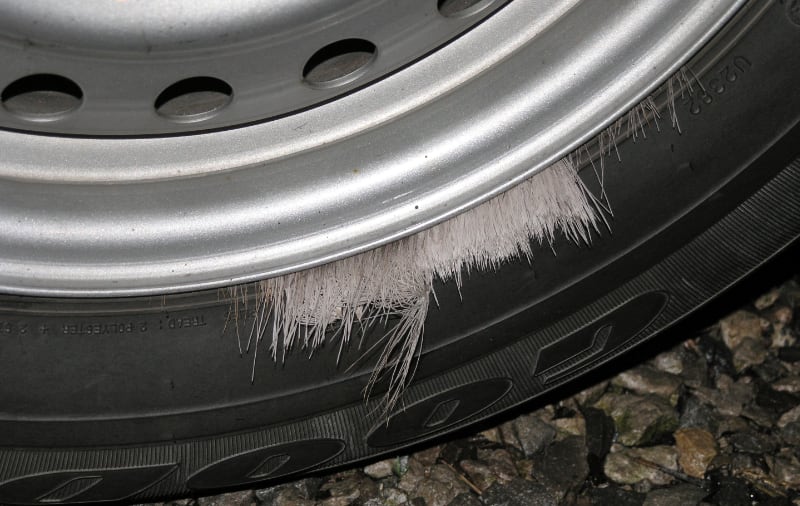 The 2005 deer crash actuallt caught some of the buck’s hair between the front left tire and rim. (Credit: Dennis E. Powell)

That night, three people who also worked at the concert venue had run-ins and run-intos with sex-crazed bucks. One had her new car totaled. Another was stopped at a stop sign when a buck ran into it, knocking off an outside mirror and doing other damage. That’s out of a staff of six. In one night. 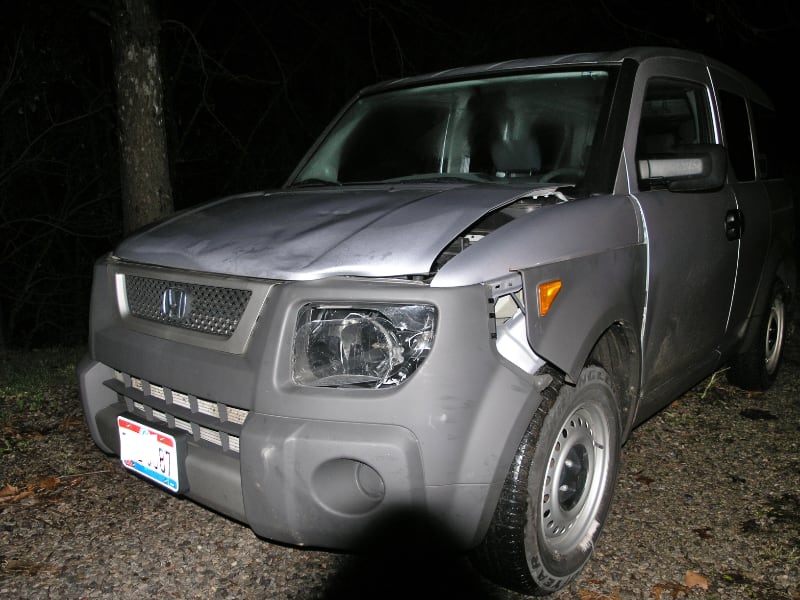 Deer are always stupid, but in the autumn they become insane as well. (If they were human they’d be president.) It’s called “rutting season,” and during the rut all bets are off when it comes to avoiding deer. Where normally they’ll stand around in the road and, when approached, may amble out of the way, during the rut the bucks are aggressive and the does oblivious except in their goal of avoiding bucks (unsuccessfully, given the deer population here).

This has always been the case, but it hasn’t always been a problem. Deer once faced predators, but we’ve mostly wiped them out. (Coyotes are making a big comeback here and just about everywhere else, but they pose their own problems. Last January I was spooked a bit by the arrival of a pack of them, howling and menacing, in my front yard, on the night I came down with what would turn out to be COVID-19. The combination of illness and predators is not one I’d recommend, and no, I’m not talking about hospital billing departments, though that’s true, too.)

With the loss of predators and our general unwillingness to do anything about deer except during hunting season, deer have lost their timidity. They’re not afraid of us anymore. There are people — the scientific term for their affliction is “idiocy” — who think it is cute or humane or something to welcome deer into their yards, to feed them, and so on. Every year or two on some slow news day we’ll hear of someone gored to death by a “pet” deer. Often raised from fawns, these bucks go into rut and see as rivals anything that moves, including the hand that feeds them. And no longer fearful, they attack. There are also every year reports of bucks smashing through glass sliding doors: they’d seen their reflection. A rutting buck inside your house is high on the list of things you don’t want. 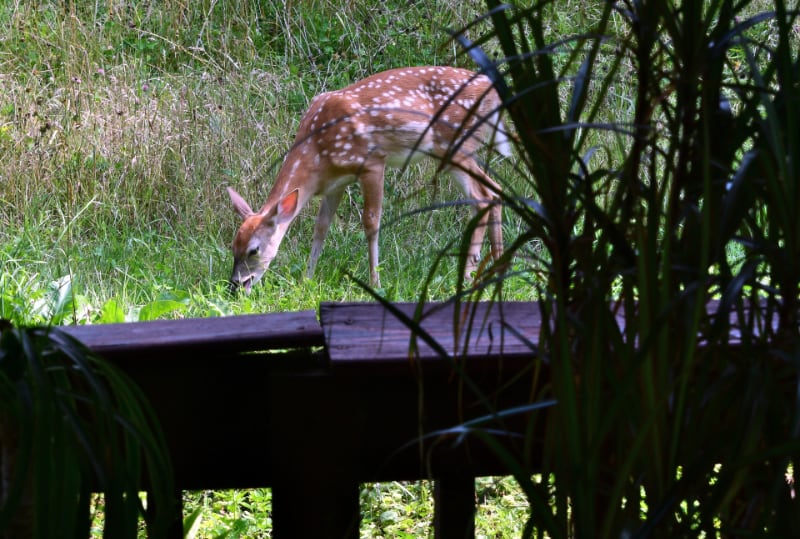 This yearling fawn didn’t mind grazing just a few feet from my back porch. Deer have lost their fear of man. You could hunt them with a golf club. (Credit: Dennis E. Powell)

On the Monday following that 2005 Saturday night I went to a local autobody shop for one of the estimate required by my insurance company.

“Hit a deer,” I said, thinking that this would be an interesting novelty.

The guy at the body shop kind of grunted unenthusiastically.

“That happen a lot around here?” I asked.

The damage came to about $4500, but things were cheaper then.

Thereafter, no soldier on night patrol was more vigilant than me when driving at night. And many’s the time I’ve had to brake hard a dozen times or more on the way home from town, 20 miles away. That’s at night.

During the day you’ll find deer standing dumbly in the middle of the road, but they’re not the big concern. The worry results from the ones at the side of the road, who seem to find sport in darting in front of oncoming vehicles, and the ones you don’t see at all because they’re obscure in the brush before they participate in the same (thrilling to them, I guess) activity.

One afternoon a few years ago I was coming from a photo assignment in town when a young buck standing on the other side of a creek paralleling the road actually crossed the creek and climbed a steep embankment so it could run in front of my car. I’d slowed down and didn’t hit it very hard. I hope it was hurt badly enough to be easy prey for the coyotes that night, but in any case it didn’t seem to damage the car.

Same stretch of road, a year or two later. A big doe came out of the brush right in front of me. I hit the brakes hard and just missed it. But I’d soon discover that I’d blown a fitting in a brake line, which made the remaining mile’s drive home challenging. 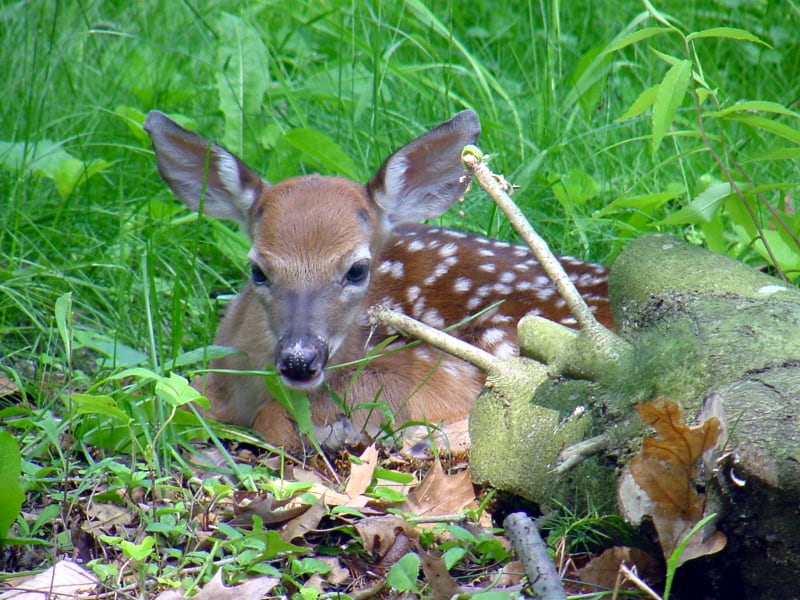 This cute little fawn got nestled in our Connecticut yard 20 years ago. Knowing what happens when deer grow up and go into rut after they’ve lost their fear of humans, we took this one to a deer rescue outfit that raises them away from people and releases them in the deep woods of the frozen north. (Credit: Dennis E. Powell)

I have a hundred pictures of deer that have wandered into my back yard. A decade ago, when I open the kitchen door they would spook and head back into the woods. Now they don’t. I keep a .22 pellet gun by the door, ready to pump up and give ‘em a sting on the hindquarters — they don’t now run away even when hollered at. (Honk the horn at ‘em? Do it if you want, but they don’t care and certainly don’t move.)

So, yes, deer had become a big problem around here even before that too-familiar thump yesterday afternoon as I drove to the store. When I got to the store I took a look and there wasn’t much obvious damage. (The deer had run off; I hope that it, too, became food.) But on closer inspection I noticed some things. The grille was missing its lower left corner. The right headlight was no longer in close proximity to the surrounding plastic. (You might not believe it, but cars were once made of metal which, unlike plastic, can be repaired.) While the left fender met the hood at a consistent three-sixteenths-inch gap, the right fender was as much as an inch from the hood. There were some cracks and breaks in the plastic. Together, they don’t look like much, but they’ll be expensive.

And now I’m off to the body shop, to get an estimate. I’m told it could be as much as three months before they can do the repairs. There’s a backlog.

I’m drawn to think that “conservation” is not conservation when that which is being conserved gets out of control.

Tags: the view from mudsock heights, deer, driving
Article Path: Home: Culture: Had It With Deer