A picture of a moonrise from 2008. It is largely unchanged since then. (Credit: Dennis E. Powell)

This Time as Farce?

He who sits upon the throne in Revelation has a patent complaint against current events on Earth.

There’s another way of looking at it. The notoriously non-revelatory Karl Marx noted that history repeats itself, the first time as tragedy, the second as farce. As with most everything else (we have no reason to doubt that he spelled his name correctly), Marx was wrong in the particulars, though the general idea, that history repeats itself, has evidence in its support.

What makes me think of this is three cutting-edge current events that might make one think we’ve been transported back 50 years. (Sadly, we did not get 50 years younger, nor is our return to that scorched time blessed by the benefit of a half-century of accumulated knowledge and wisdom.)

We’re planning to launch the biggest rocket ever in hope of a return to the moon. All of a sudden nuclear power is a good idea again. Russia is on the march. Those three data might lead us to guess it’s 1972 again.

This December it will have been 50 years since human beings last stepped onto the dusty surface of the moon. There had been plans for further trips there, but a combination of things kept it from happening. They were, in no particular order, Richard Nixon, whose enthusiasm for lunar exploration, if he ever had any, was attenuated by John F. Kennedy’s enthusiasm for it; the Vietnam War, which was sapping the country’s — everything; and the endless grab-bag of other wishes, exemplified by the cliché “a country that can go to the moon ought to be able to . . .” That list of wants and wishes (all of which are getting granted now by Joe “Bugout” Biden under his the-future-be-damned policy) had constituencies. Exploring the moon didn’t. It was something we did because we could, because it exercised everything in our nation that was worth exercising, and because its technological developments made for a decades-long growth in how our lives were lived and how our economy grew. For all our virtues, we are not a forward-looking people.

As a result, we became the first humans to start exploring a place, then turn tail and run. That’s in contradiction to the most basic human nature. It is, I think, a crime against humanity. I discussed this a few years ago with Harrison Schmitt, one of the last two men to visit the moon. 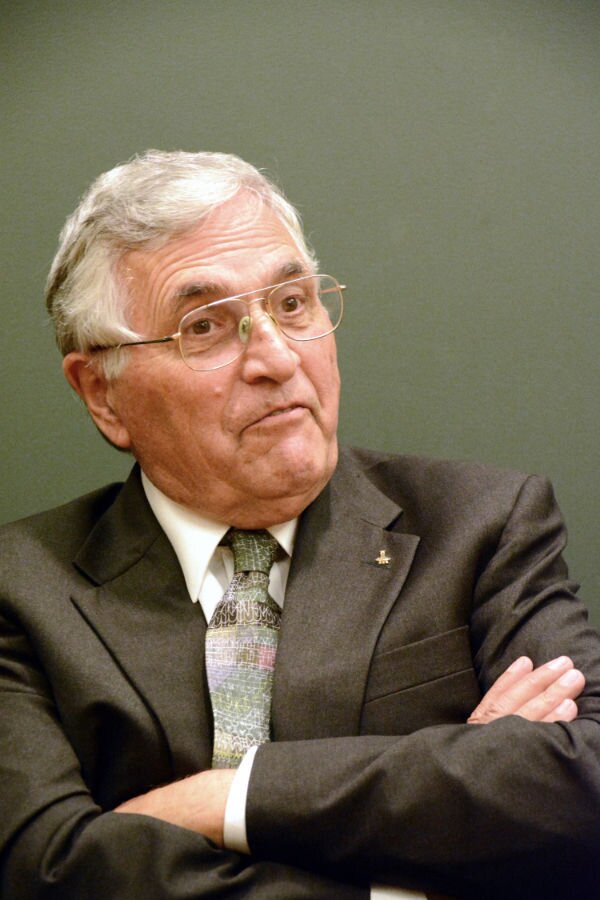 Harrison Schmitt, one of the last two guys to walk on the moon. (Credit: Dennis E. Powell)

“It’s because of politics and other distractions and priorities, actually beginning when Lyndon Johnson made the decision that we weren’t going to buy any more Saturn Vs [Werner von Braun’s immensely powerful rocket that carried our astronauts to the moon],” Schmitt said. “And you need that kind of capability if you’re going to establish yourself permanently on the moon. That pretty well set the die.”

In the 50 years since our abandonment of the moon, private companies have established their own space programs. I think that this more than anything else spurred the government to renew its lunar aspirations. What if Elon Musk — who undoubtedly could do it better, faster, and cheaper — were to land his people on the moon and declare the place his own? Who could stop him? (And is this such a bad idea?)

I suspect that Bugout Joe was persuaded to go along with the government space program through the promise that if we put people on the moon, he could then abandon them there. He seems to enjoy that kind of thing. Biden has never been a good man nor a nice one; he has only added senility to his already long-list of non-virtues.

Half a century ago we were talking about establishing a permanent presence on the moon. Here we are, picking up where we left off — with a weird woke twist, that it might be a place where we can park women and minorities. It would be nice to have a view back 50 years from now, to see how it worked out this time. Here’s hoping it will be neither tragedy nor farce.

I’m old enough to remember the first “Earth Day” in 1970. Many of the placards and posters demanded “Nuclear Power Now!” It was one of the few things in that herbal-scented, dope-addled event that actually made sense. If you want to reduce pollution, sensibly operated nuclear power plants can do that better than just about anything else. The problem with nuclear power is that its upfront costs are vast and companies often paid little attention to the future results of their actions, making them kindred spirits with the current U.S. president. People in government and industry, looking not to their historical legacy but to the next election and next quarterly report, respectively, are wont to do stupid things. (Such as building California’s Diablo Canyon Power Plant, a huge nuclear reactor, practically on top of a major earthquake fault. It would be okay if only California were at risk, but California is upwind of the rest of the country. The nuke plant has been “upgraded” to survive a 7.5-magnitude earthquake. In 2011, it was a 9.0-magnitude quake that wrecked Japan’s Fukushima Daiichi Nuclear Power Plant.)

Nine years after that first “Earth Day,” a cooling system problem resulted in a partial meltdown of one of the reactors at the Three Mile Island Nuclear Generating Station, in Pennsylvania (nor far from my ancestral home of Powells Valley). The problem itself was well controlled and the incident killed fewer people than Ted Kennedy had killed in his car a decade earlier, but it coincided with the release of a movie, “The China Syndrome,” about a nuke plant meltdown. The movie publicists had a high old time for themselves and before the slightly radioactive steam had cleared enormous damage had been done to both the nuclear power industry and the news media’s ability to distinguish fact from fantasy. Neither recovered, and nuclear power became something few dared to suggest. Heaven forbid that anyone look to see how we could learn from those mistakes and make the use of nuclear reactors for power generation as safe as surely it can be. 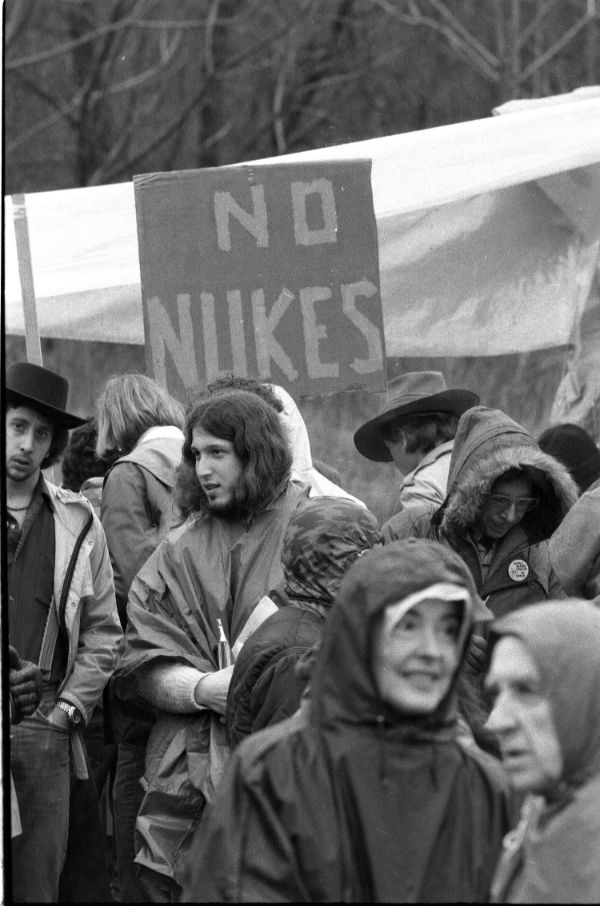 Now nuclear power is being discussed positively again. There has been some lead-up to this. For a little while now mentioning it didn’t automatically bring disapproval. But currently it’s full nuclear-generated steam ahead. Russia invaded the Ukraine and there’s a world emergency. The existence of the emergency is not in question; instead, we must examine the things we do in response to emergencies. The Arab fuel crises of the 1970s led to mass stupidities: we extended daylight saving time, which benefits only the operators of golf courses, and we reduced the national speed limit to 55 miles per hour, which caused no one to slow down but which did result in further expenditure of fuel as people drove to traffic court. The COVID-19 emergency caused the expenditure of much treasure in the creation, production, and distribution of vaccines that to the best of my knowledge haven’t prevented a single case of COVID-19.

This kind of thinking, the “oh-my-God-we-have-to-do-something” approach, is not proper motivation of the safe and productive nuclear power generation systems that we can and should have. As a result, California’s lone remaining nuke plant — you guessed it, Diablo Canyon — is being given the go-ahead to remain open, and even the California environmental crowd supports it. European countries are deciding that nuclear power isn’t so bad after all. Even Japan, understandably nuke-shy after Fukushima, is re-embracing nuclear power generation. Will the world do it right this time? We hope and pray so, but our track record in times of panic does not inspire confidence. So, in nuclear power generation we’re about where we were half a century ago.

(Don’t get me started on “cold fusion,” which as of now remains a fairy tale. We’d all love for it to be true — unlimited energy with water as the only byproduct — but for now it’s not far from the amazing green pellets promised by Guido Franch. He claimed he had developed a magic substance that turned water into fuel that was better and cheaper than gasoline. I spoke with him in 1974 and found him to be in his way worse than a grifter, because he truly seemed to believe in his amazing discovery. Nothing ever came of it, and Franch, of Chicago, died in 1990.)

Fifty years ago Mikhail Gorbachev was six years away from national prominence in the Soviet Union, which had world domination as its goal. It would be 18 years before he would become the Soviet president and though he did not himself unravel the Eastern Bloc and the Soviet Union he also refused to use force to prevent those things from happening. (The fall of Soviet communism was inspired in large measure by advertisements for Levis, McDonalds, and other supposedly fun-filled marks of Western decadence, and by Pope John Paul II.)

But now, in 2022, Russian hegemony is at it again. No one in 1991 thought to put a bullet between the eyes of a KGB thumb-breaker named Vladimir Putin, and the results are unfolding now. He has publicly decried as a tragedy the collapse of the Soviet Union and is trying to revive it. No one was happier at Gorbachev’s death — are we sure it was of natural causes? — than Putin, who we can imagine will soon reside in Hell if Satan will have him.

And, as 50 years ago, the noisiest and most immediate threat to world peace is Russia. (Yes, China is trying to occupy that role and would succeed but for the fact that its economy is heading downward and picking up speed.)

So. The net effect of the last 50 years is that a lot of us got born and those of us already around got 50 years older. This ought to be humbling to those who think we have any real power to change things, because the evidence suggests that we don’t. And the general trend is not toward goodness and enlightenment and sensibility. Quite the opposite.

Let’s bet on, and pray for, Revelation.