Like the science fiction creatures and machines based on them, praying mantises have pretty, even delicate details. (Credit: Dennis E. Powell)

The Monsters Among Us

As life moves to dotage (and of course anecdotage), and like many people having allowed my recovery from COVID-19 to proceed largely at its own pace, I only now am getting around to mowing.

I have a fairly good excuse for this. My yard hosts lots of fireflies, and if you keep your yard well mowed the fireflies have difficulty reproducing. (Unlike humans, apparently they value their privacy.) So for the last few years I haven’t mowed at all until July. But July here was very hot when it wasn’t very rainy — sometimes it was both — so it wasn’t until last weekend that I fired up my fine, Missouri-made Swisher mower and went to work.

Within a few minutes I noticed movement and looking closer I found as big a praying mantis as I’ve seen around here. So I grabbed camera and lens (a Nikon D500 and a 105mm f2.8 manual-focus Auto Micro Nikkor, in case you’re keeping track, shooting at f11 and letting the camera decide the shutter speed) and commenced picture making.

Praying mantises, so called because they appear to be praying but they are so voracious that it would be just as accurate to call them preying mantises, are gram-for-gram as nasty a customer as you’ll find. They resemble monsters and robots in science fiction because if you’re designing robots and monsters for science fiction they’re a good place to start. 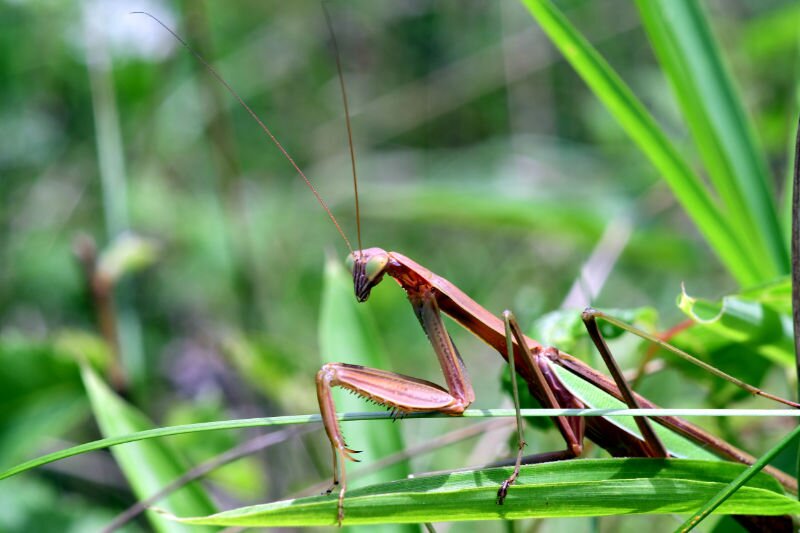 Despite its size — about four inches — this miniature monster blends in well with its surroundings. (Credit: Dennis E. Powell)

I have some history with them. There are pictures of me as a kid of three at my grandparents’ golden wedding anniversary, holding up a jar containing walking sticks and praying mantises and explaining their natural history to a family friend, Dr. Phil Stone, a university entomologist. I actually remember it, too. He seemed to agree with what I had to say and no doubt came to be better informed because of it. I’ve tried to perform this service through most of my life. I’m not alone in this attribute.

Not long afterwards I happened to be with my father, visiting relatives in Pennsylvania. It was during the winter. I found a praying mantis egg case, which was kind of roughly spheroid, unlike the shoe-shaped ones of Missouri mantises. I tucked it away and brought it home with me. One morning, fortunately well before the thaw, we discovered baby praying mantises all over the place. The eggs had hatched. There being nothing for them to eat, they soon disappeared. 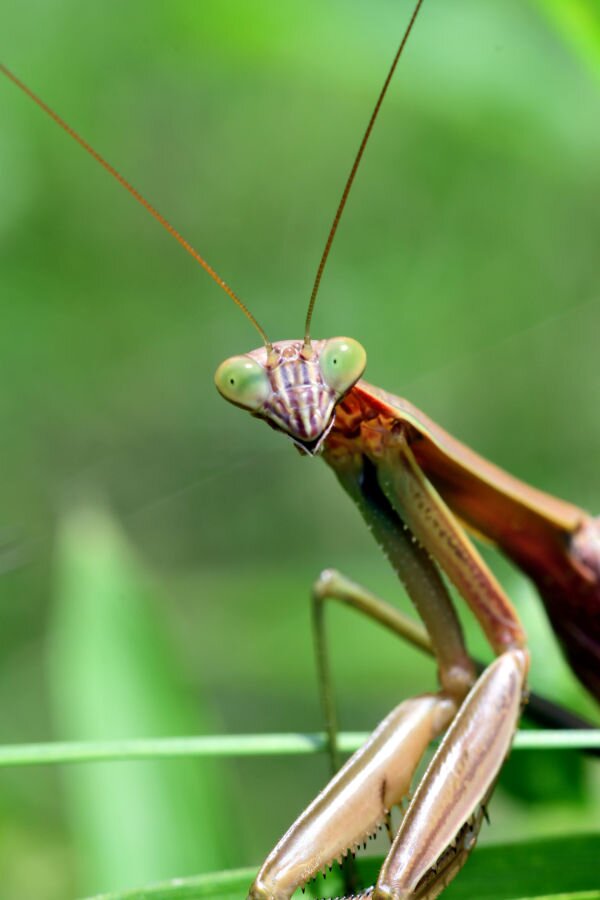 While giving thanks daily, don’t forget to include how grateful we all are that praying mantises aren’t 50 feet tall. (Credit: Dennis E. Powell)

The praying mantises known to us are a tiny part of a widely spread and very diverse order of insects. Like few other creatures — ants and seahorses are the ones that first come to mind — mantises have evolved vast and sometimes flamboyant shapes and colors that look weird on their own but that blend in perfectly amid their natural surroundings. For ants and seahorses this is to avoid getting eaten. For mantises it is so they can wait, attack, and eat.

Over the years there have been several times in different locales where I’ve been looking straight at a praying mantis and failed to see it. Their behavior maximizes the effect of their camouflage. Indeed, the pictures here give some small sense of how well they blend in.

We’ve probably all heard the story about how during or after mating the female praying mantis gnaws the head off her mate, then devours him. We’ve all been horrified by the claim, which has been passed down from generation to generation. Guess what: the story is true. They do exactly that. The other part of the story is true, too: even if the male’s head gets bitten off during the sex act, the act continues to completion. Male praying mantises’ heads are not involved in their mating. Praying mantises: so like us.

If you’ve ever watched a praying mantis for a while, you’ve probably noticed how it turns its alien-looking triangular head to examine something that has gotten its attention. This, too, is as it appears. They have stereo vision, as we do, and their peripheral vision is chiefly good for detecting movement — as is ours. It has the uncanny effect of making us think that the insects are very smart and are carefully deciding what evil thing to do next. It is not by accident that so many fearsome alien invaders in science fiction movies resemble praying mantises in one or more respects, almost always including those bulging, omniscient eyes, triangular head, and indistinct but menacing mouth parts. If I were an alien invader, that’s how I’d want to look: there is no negotiating with such a creature, a killing-and-eating machine that has mechanical, robot-like aspects. Surrender or die, though in the case of the praying mantis it’s surrender if you want but die anyway. Praying mantises are unforgiving and unrepentant. There might be no praying mantises in Heaven.

Looking at the pictures after I’d made them, I was startled — I thought I knew mantises pretty well, but clearly I didn’t (sorry, Dr. Phil Stone). The insects’ front legs — called “raptorial” forelegs — are the vicious, spiny weapons they use to capture their prey with high-speed ferocity. But now I noticed something I’d neither seen nor imagined. 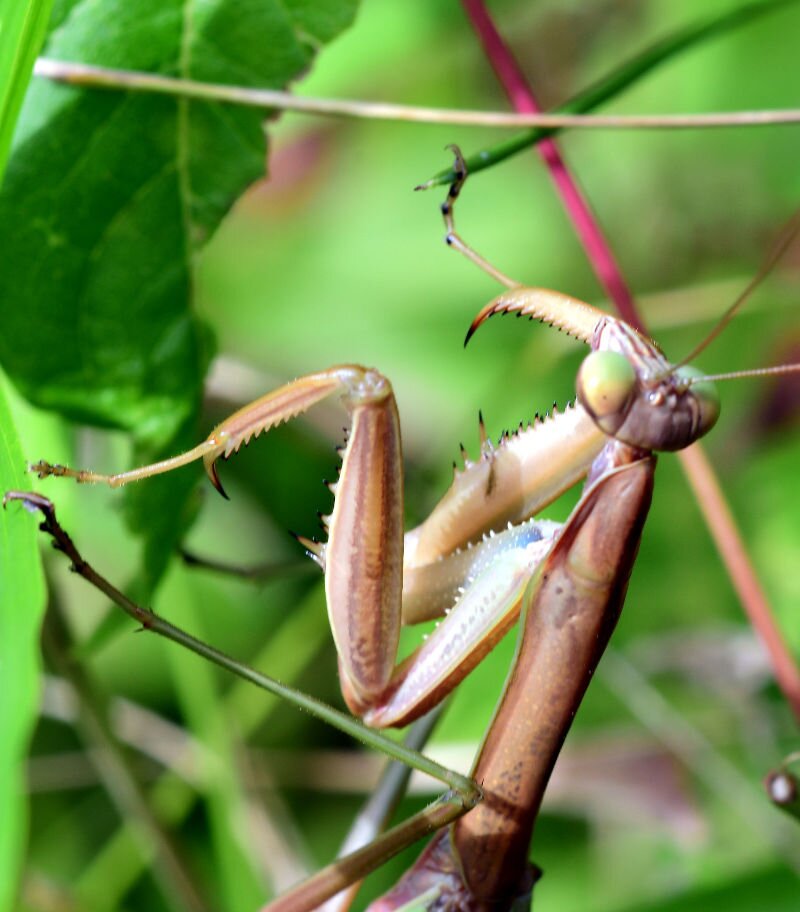 It wasn’t until this picture that I realized the praying mantis’s front legs extend beyond those fearsome grasping claws. (Credit: Dennis E. Powell)

Those forelegs include the parts we’re familiar with, the two big scythe-like parts that grab prey, usually other insects. The bigger part, closer to the body, is called the femur. The smaller part, located at the end (I thought) of those legs is also a spiked weapon; it is called the tibia. I had spent a long and, I thought, well-informed life in the oblivious supposition that this is where those legs end. But no! There’s a whole other collection of small segments, called the tarsus, that continues on. It’s used in climbing and doing other leg tasks, just as their equivalents on the mantis’s other four legs do. It is a big deal when something you’ve thought true since you were a little child isn’t just thrown into dispute but definitively proved false. My belief in everything is now shaken.

(Well, that may be overstating the case, but I sure was surprised when I saw the pictures.)

Humans have always, it seems, been fascinated with mantises. Ancients included them in their art, as did such modernists as M.C. Escher. We’ve ascribed peculiar powers to them; in the Ozark areas near my childhood home they were called “devil’s horses,” which is a little extreme. (Walking sticks were “devil’s darning needles,” and no doubt among the population there were arthropods sufficient to outfit any well-equipped devil, but they didn’t tell me about the others.) Just as weird is the practice of keeping them as pets and even — in England, of course — breeding them in captivity. (Though if you wanted to set up a praying mantis stud service, you might want to give that a second thought unless you have a whole lot of male mantises.) 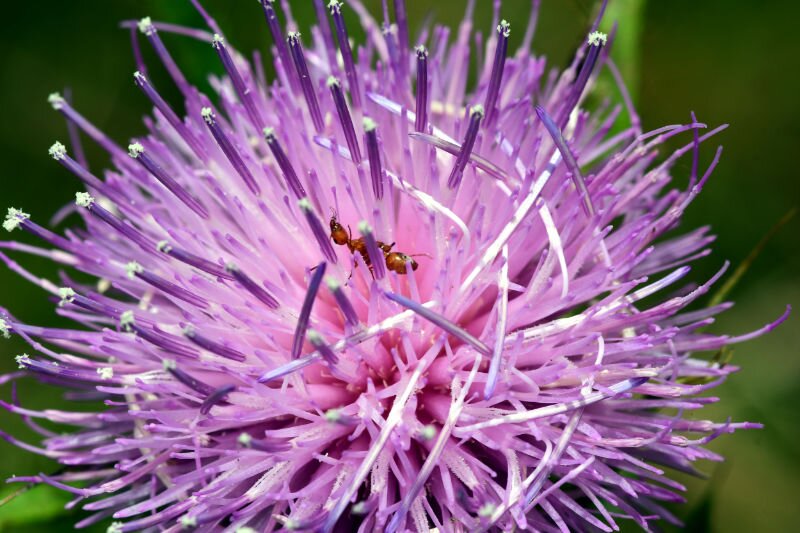 Who is eating whom? Perhaps we’ll learn if the “Ant and the Thistle” fable ever gets written. (Credit: Dennis E. Powell)

Mantis pictures made, I looked around and saw a very pretty thistle plant in all its spiny glory. Its bright pink-purple flower had an orange ant, unmoving, amid its petal-like spiky parts. I have no idea who was eating whom; when I looked a while later the ant was gone, so the question must go forever unanswered. 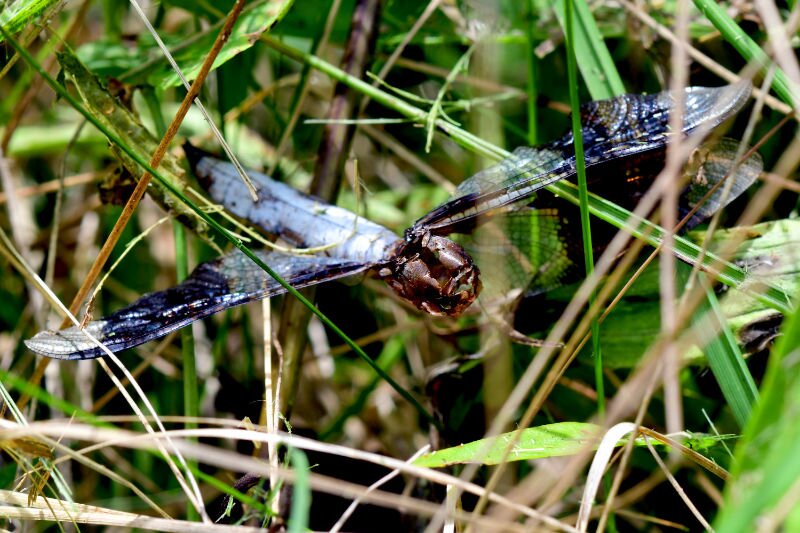 I hope the pilot and crew of this dragonfly parachuted to safety, though who knows — their remains may still be inside. (Credit: Dennis E. Powell)

On the ground nearby was what was left of a dragonfly, whose eating habits make it much like a flying praying mantis (though I do not know how its marital relations are arranged). It looked a little like the pictures we sometimes see of wreckage of a World War II bomber in some tropical jungle. The Ozark folk call dragonflies “snake doctors.” Don’t rely on Ozark folk for taxonomy.

Oh, well. Grass still needed mowing, so I returned to it. 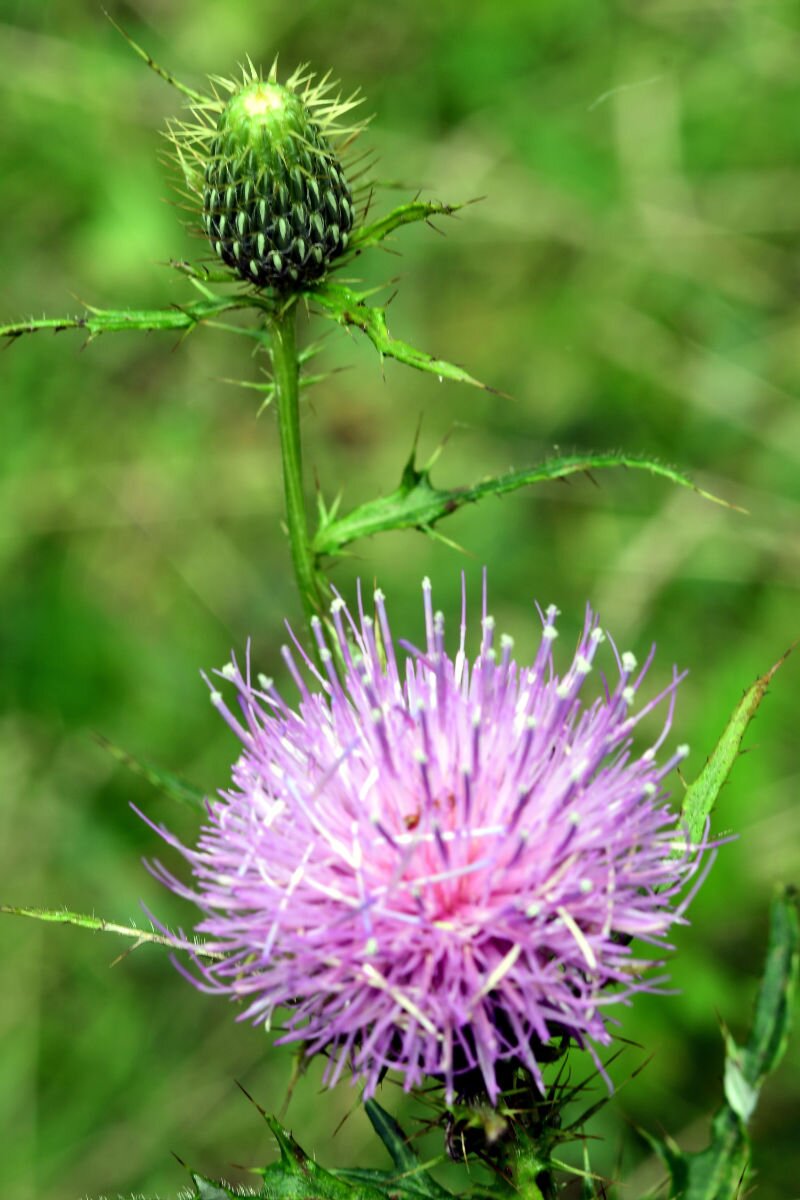 The artichoke is a kind of thistle, and this picture of the latter makes it clear why that’s so. In fact, I believe thistles are commonly eaten, too. (Credit: Dennis E. Powell)