A Memory of Paul Sorvino

Paul Sorvino died on Monday at age 83. He was involved in an anecdote that I cherish a little. In some respects it might surprise you.

Fifteen years ago I got a call one morning from Vanessa Kaukonen, wife of legendary guitarist (Jefferson Airplane, Hot Tuna) Jorma Kaukonen and manager of the various Jorma-based enterprises.

Vanessa had received an unusual phone call and request. It seemed to be on the up-and-up — would I take care of it?

The story, as it eventually unfolded, was this: Amanda Sorvino, daughter of the actor Paul Sorvino and sister of the actress Mira Sorvino, was working on the pilot for a television series about animal rescue. She had chosen as the subject, or one of the subjects, the Last Chance Corral, a horse rescue organization local to us.

Okay. What did this have to do with us?

Well, it turned out that they hoped to film a scene in which Amanda’s famous father would happen to bump into Jorma at a local bar or someplace. There were, it seemed to me issues. Some needed mentioning — Jorma doesn’t hang out in bars, nor does he want to give the impression that he does — and some that weren’t my business to mention — Paul Sorvino doesn’t, either, at least not bars in Athens, Ohio. No one ever just happened to encounter Paul Sorvino in Athens, Ohio. That jewel of the Western World had I think previously (and afterwards) escaped him.

Anyway, as it was supposed to unfold Paul and Jorma would run into each other, greet each other warmly (I don’t think they’d ever met), and Jorma, who would just happen to have his guitar with him, would play a song and the two guys would talk. I guess they were to talk about rescuing horses, though I’d not known this to have been a particular interest of Jorma’s. I’m sure he was in favor of it, but I don’t think it was one of his leading concerns. Television invents its own reality.

I met Amanda and her crew at Last Chance Corral, where they were shooting some b-roll. She and I headed to town to set up the evening’s Paul-Jorma encounter.

The obvious place was Casa Nueva, the culturally popular “worker-owned” restaurant in Athens. Alas. No one there could give us permission; it would require approval at the next meeting of the people’s revolutionary council or whatever it was called. There would be no such meeting between now and tonight. The Casa was out.

Not wishing to be embarrassed in front of Amanda — hey, she was really cute, okay? — I came up with an alternative, in the form of the Blue Gator, around the corner on North Court Street.

Let’s take the scenic route for a paragraph: The Blue Gator was owned by Terry Anderson, once a very familiar name in national and international news reports. An Associated Press reporter, he had been captured in Lebanon by Hezbollah and held hostage for seven years. Released at the end of 1991, his travels led him to Athens, where he taught in the journalism school. He sued the Iranian government, won, and received a lot of money, some of which he invested in things like the Blue Gator. I knew him a little. He was a nice guy who definitely had some miles on him.

He wasn’t at the Blue Gator that day, but I was prepared to invoke his name were there a problem. That preparation was unnecessary. though. Here is a verbatim transcript of the negotiation:

Me: Hi. We’d like to shoot part of a television program here, with Paul Sorvino and Jorma Kaukonen.

I basked in the warm glow of what I’m sure was entirely imaginary adoration from young Amanda. But we were set, anyway.

Come evening we met up at Last Chance Corral. I drove Jorma, while Amanda, Paul, and crew drove other vehicles. We all had supper (excellent halibut, by the way — you know it was good if you remember it 15 years later) and Jorma and Paul got introduced to each other. How the thing would be shot was worked out. The crowded front room at the Gator was full of its usual college-and-townie patrons, none of whom expected to be filmed for network television when they went out for supper that night, but hey, this is Athens, roll with it. 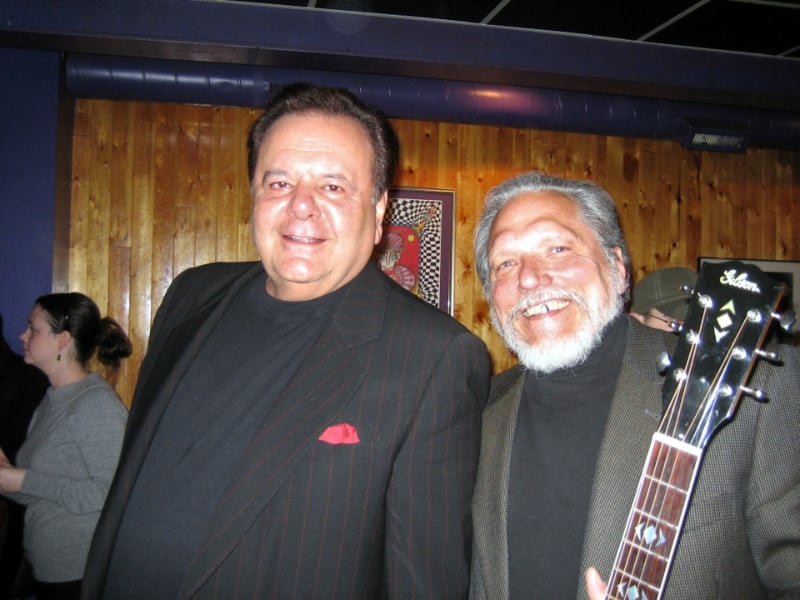 Paul Sorvino and Jorma Kaukonen in the one picture I was able to grab after the Blue Gator “meeting.” (Credit: Dennis E. Powell)

And so it was somehow made to appear in front of television cameras in a small Ohio town that the famous rock and blues musician Jorma Kaukonen just happened upon the famous actor from “Goodfellas” and “Law & Order” (when it was still good, before “Law & Order: Political Correctness Squad” or whatever it’s called now) and Jorma played sang a song and then — this surprised everyone who wasn’t Paul or Amanda — Paul erupted in a loud and beautifully rendered song in Italian. It was, all in all, a pretty stunning evening, though I still think that the premise beggared belief. And I don’t think any of it was ever aired. I hope the footage was preserved. It would be pretty cool if Amanda were to make it public.

The evening’s drama was not over, not yet.

Amanda traveled with a couple of big dogs. I thought of them as German shepherds, but people are finicky about dog breeds so all I can say for sure is that they looked to me like German shepherds. She obviously could not bring them into the restaurant, which was lively enough already.

So she locked them in her father’s car, a fine, new car as I understood it, with leather upholstery. It was in early spring and after dark, so there was no danger to the dogs.

After the shooting was done and everyone was smiling and happy, Amanda came up to me. She was upset; I don’t think that frightened is too strong a word. She needed to be rescued and I, she said, was the one to do it.

She had just looked in on the dogs, maybe taken them for a walk. They had, she said, pretty well destroyed the interior of her father’s new car. She did not want to tell him. Would I do it?

There are moments of overwhelming internal conflict that befall each of us, and this was one for me. Amanda was adorable, and clearly in need. We daydream about being heroes, saving the fair maiden, and so on. Paul Sorvino was a very big man, a passionate New York Italian, qualities that made him a fine opera singer and a great actor. My best friends in New York included Italians. The father of one of them, also a very big man, had on more than one occasion apologized to me, sort of, after having sent me flying across the room in a moment of extreme displeasure. Forgive my cowardice, Amanda, but all I could imagine was my traveling backwards through the Blue Gator’s plate glass storefront, something more fun to watch than to experience. Paul Sorvino was a very big, very passionate man and a very protective father.

There were practical considerations, too, I now realize. I didn’t know the guy. What was I to say? “Amanda’s dogs ate the interior of your new car. Sorry.” Or was I supposed somehow to accept responsibility? “I ate the interior of your new car. Sorry.” I’m not sure the plan was well thought out. Perhaps all she wanted was advice and support. Sadly, I’ve not over the years been all that persuasive in dealings with the angry fathers of beautiful girls and there were a couple of incidents when it all went very badly wrong.

So I declined to be the bearer of Amanda’s bad news, possibly saving the family the embarrassment of this week’s obituaries including a line about how their patriarch was acquitted of murder charges in Ohio when the jury found justifiable homicide in a automobile vandalism case.

“Let’s go home,” said Jorma. I wished Amanda good luck, assured her that her father might be mad but it would blow over, and skedaddled.

I never heard how it all turned out, so it probably went okay.