The night is filled with the pop-pop-pop and occasional, ever satisfying thud of fireworks. For someone who has spent every Fourth of July with a punk in his hand since he was old enough to shoot off fireworks, those sounds seem a bit out of place tonight. None of them were coming from my fireworks.

Anyone who knows me knows how much I love fireworks and have loved those Fourth of Julys where the family would gather and we would enjoy a display of all sorts of interesting large and small carefully selected fireworks. In recent years, I have been known to plan a year ahead, picking up at least some of the interesting fireworks for a given year’s show right after Independence Day the previous year.

This year those fireworks sat at their posts unfired. It seemed almost difficult to process that this day was really the Fourth of July. 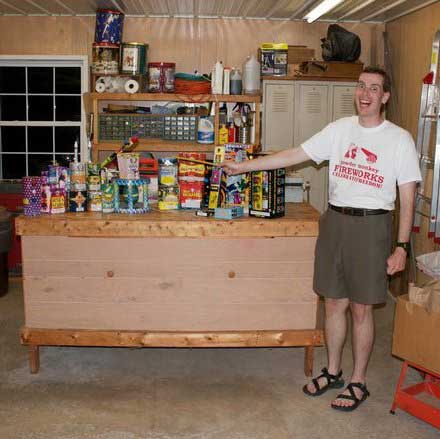 Memories from Fourth of Julys Past.

You see, St. Louis is currently facing one of the longest spells of high temperatures in its recorded history. Combine that with a virtual absence of rain week after week, and you have a brew that is incredibly unfriendly to responsible enjoyment of fireworks.

The heat and the dryness have pushed up water demand so much that the suburb I live in has called on people to stop watering yards, not because the Mississippi has suddenly gone dry and left the city without a good source of water, but rather because the city – which has relatively new infrastructure compared to many – is now dealing with overheating water processing equipment.

The scorching summer weather was already progressing towards a triumphant victory over green lawns, but a ban on watering cinched the deal. Wherever one looks, grass is increasingly dormant and even well established trees are shedding leaves. This is not the problem you want to have right before thousands of households, many of whom don’t have the slightest clue about safety procedures for such things, start igniting explosive devices that emit countless sparks.

Over the years, my family always tried to shoot off fireworks carefully, with buckets of water and garden hoses at ready, ever prepared for the misfiring shell that could catch something or someone on fire. After a few times where fireworks did shoot far too close to people for comfort, we started putting most of the more significant fireworks in a larger tube to add some additional protection should the firework itself fall over or otherwise head in the wrong direction.

Many people seem oblivious to it, but the more impressive tube fireworks – the artillery shells and such that provide the impressive “breaks” that fill the sky – frequently drop still hot fragments of their shells back down on the ground. No matter how prepared you are, if the grass breaks when one steps on it and the ground in well cared for lawns has cracks appearing throughout it, wisdom argues against intentionally introducing very hot, smoldering objects onto the lawn.

Even many professional municipal shows were called off this year.

Thus it was that my punk stayed unlit tonight.

And I missed it. The burning punk smell. The rapid, repeated running away from lit fireworks and returning with new, unlit ones. The excitement of watching some new firework one found at a stand create a beautiful show of sparks and strobes.

The one firework of Independence Day 2012.

The night couldn’t end without any of that. So, I lit one firework – the most harmless one I could think of and, to many folks' chagrin, also one of my lifelong favorites: a mammoth smoke bomb. While it did not erupt in bursts of lava-like light or broadcast any screeching reports, as the yard filled with beautiful green smoke and its accompanying scent, everything seemed just a bit more “right.” It was the Fourth of July after all.