The View from Mudsock Heights: Godspeed, Father Marty, on Your African Adventure

The first time I met Father Marty he was sweeping the hallway near the entrance of the parish hall behind his church, Christ the King. He greeted me warmly. It could be that he knows other greetings, but a cordial welcome with a genuine smile is the only kind I’ve ever seen. It is engaging, coming as it does from this white-haired, white bearded fellow, not tall but a little stout, who had he chosen a different career might have been Santa Claus or maybe even a leprechaun.

I was there for the classes that would lead to my confirmation in the Roman Catholic Church. Some months later, at the Easter vigil, it would be Father Marty who asked me and the others like me the questions, received the answers, made the sign of the cross on my forehead with the sacramental oil, and welcomed me into the Church. He had tears in his eyes that night (not, presumably, of the “here’s Powell; there goes the Church” sort — at least I hope not), but they sparkled anyway, as parishioners will tell you they always do. I’m pretty sure the tears were of happiness at the beauty of the sacrament and the arrival of some new Catholics into what is a remarkable and wonderful journey. 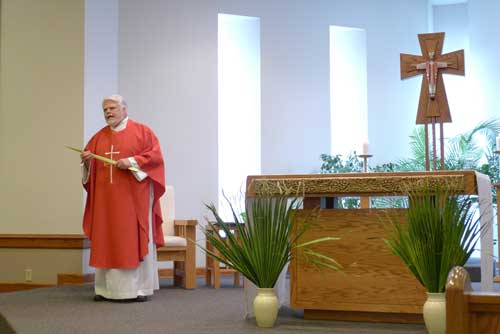 Now Father Marty is off on a different kind of adventure.

Father Martin Holler arrived at Christ the King, the parish serving the local university Catholic community, in 1985. He has seen his congregation go through changes, the Church overall go through trials and triumphs, and babies he’s baptized return with babies of their own. He is beloved in the parish.

The rules of the diocese require retirement of priests who reach age 70. So last summer, amid both celebration and sadness, he said his last scheduled Mass (though he’s been back from time to time to serve in the absence of the new priest, the already much loved Father Mark Moore). With the retirement this year or next of St. Paul’s Father Patrick Gaughan — also truly beloved, as great priests tend to be — and the consolidation of the two parishes, much is changing. Even the liturgy has changed, with the adoption of a more accurate translation (though it’s not so vast a difference as some of the reports would have you believe).

And Father Marty left off a few weeks ago for Africa.

A half dozen years ago a young couple from Kenya, studying at the university, began attending Christ the King. Fr. Marty got to know them and, when they had a baby, their mothers, who had come to help out. Over time he learned of their involvement in a rural school in Kenya, the St. Jude Academy. When last year he retired from being pastor of the church, he went for a visit.

“It is a K through 8 school, with maybe 70 or 80 students,” he told me the other evening, well, a couple of weeks ago now. “There is a teacher for each class, and most of the children walk to and from school, so they’re from the local area, which is an agricultural region.” The teachers are young and dedicated, and many of them are themselves still studying. It’s a very hopeful place, he said.

“I talked with family and friends, and none of them objected very much, so I’m off on this new part of my life.” He’s going back.

“Do you have Skype?” he asked excitedly. “I can walk around with my laptop and show you the place!” After I got over the fact that broadband service in rural Kenya is better than it is around here I said that yes, I have Skype. It will be a treat to place a call early in the morning (here), which is mid-afternoon there, and view his new world. So many people in the parish want to see that it may be that his afternoons are already booked for the foreseeable future.

He smiles while describing his instructor in the local languages, a little seven-year-old girl — the baby born to the couple from Kenya while they were here. And he’s happy to note that while many homes do not have electricity and some of the flat-panel, wide-screen luxuries we enjoy in the U.S., the place is not destitute but instead self-sufficient, living a simple and happy life.

This time, he’ll stay through August, helping out and being involved in development of the school. He sounds excited, but he always sounds excited about the possibilities of good things in the world. Indeed, for the last months of homilies at Christ the King he focused on the line from Psalm 40 that is almost his motto: “Here I am, Lord; I’ve come to do Your will.” He encouraged the congregation to adopt that sentiment and to say it each morning.

My guess is that it was the first thing he said, too, when the plane landed in Africa.