The View from Mudsock Heights: The Recent Scandal that Exposed the Dangers of that “Send” Button

The, um, member of Congress is gone, but his sorry tale should remain as a lesson: anything you do on the Internet, even when you think it is private, is there forever and can come back to bite you.

Far be it from me to think that anyone reading these words would ever engage in the kind of misbehavior that led to the downfall of the unfortunately named soon-to-be-former Representative Anthony Weiner, Democrat of New York. The whole absurd and tragic (for him) spectacle was as they used to say a weapon of mass distraction. When it came to light that he was going to resign, I watched the television people “report” from outside his home, outside his office, and outside the hall where he made his announcement. All that was missing was an OJ Simpson-style helicopter shot of whatever he was driving as it traveled from place to place. You can count on television to pull out the stops, especially if it does not involve any actual reporting skills, because they’re fresh out of those.

Weiner is not a likeable guy. You may have noticed that no one jumped to his defense when it came out that he had been sending remarkable pictures of his unremarkable personal regions to numerous women he had never met. Frankly, in the litany of government scandals, this one is pretty minor compared to some. But when you have been, like Weiner, among the first to demonize and lie about your political opponents, they enjoy a certain schadenfreude when you get yourself into a fix. It is that which the news media covered. It’s a story, but it’s not the story. 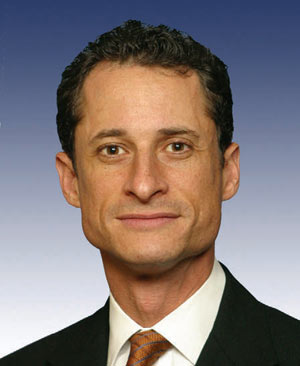 The man who learned the hard way.

One character. One click on the keyboard or mouse. That is the difference between the spectacle we have seen over the last three weeks and Weiner’s misbehavior remaining secret, perhaps for awhile longer, perhaps forever. Because that is all it would have taken to keep private the privates that became public through the absence of that one character.

It’s tempting to go on now about “Twitter” and “Facebook” and Facebook’s now unfashionable predecessor “My Space,” and the ugly things they tell us about ourselves and our desire to stroke our own egos (and perhaps more, if we’re Anthony Weiner). But that would be to miss a point that is actually useful.

One of the first rules of computing is that the finger is faster than the brain. Anyone who has done anything online for long has discovered that the finger can click on the “send” button even as the brain is screaming, “No! Don’t click on the ‘send’ button!” This phenomenon is most prevalent late at night and is enhanced when alcohol is involved, even only a beer or two. (Computing while intoxicated has gotten a whole lot of people in a whole lot of trouble. But intoxication is not required.)

The great strength and the great danger of the Internet is that it is instant. Just as the bell cannot be unrung, the message, posting, or “buy it now” click cannot be unsent. And once the send button has been pressed, whatever it signifies has been unleashed on the world.

My old grandfather used to have a rule about angry letters: write it if you must, but hold on to it for a day. Read it in the morning and only if you then think it appropriate go ahead and mail it. It’s a good rule. When obeyed, it prevents a lot of embarrassment. But the immediacy of the Internet runs counter to that rule. It allows the lesser angels of our nature to gain control. If we want to avoid embarrassment or worse, we must listen to that little voice that tells us, “maybe this isn’t a good idea.”

Often, we don’t listen to that voice. There are many folks — no, I am not among them, thank goodness — who in the heat of online political debate have sent something the result of which was the opportunity to get to know some of the fine public servants who work for the Secret Service. There are many more folks — I am one of these — who have shuddered at returning to an online forum, remembering that last night things may have gotten a little bit out of hand. (Civility isn’t a strongly present on the Internet.)

The thing is, what we do and say on the Internet never goes away. E-mail messages, even private ones, are archived on the servers through which they pass. When you delete a sent message, you’re only deleting it on your computer. It’s carefully preserved on every other machine that handled it. In fact, in most cases the law requires that it be preserved. That means that anyone who wants it badly enough can get it, legally if there’s a good reason and sometimes illegally if there isn’t.

It’s frightening, but there’s a simple enough solution: Be good. Don’t do or say anything online you don’t want others to know about.

The old saying is, “if you can’t be good, be careful.” On the Internet that is a mighty tall order. Fail to heed it at your peril.

Don’t take my word for it. Ask Anthony Weiner.

Also Filed Under: Home: Culture: Politics: The View from Mudsock Heights: The Recent Scandal that Exposed the Dangers of that “Send” Button
Please enter your comment entry below. Press 'Preview' to see how it will look.