The Showdown: the 4G Contenders Square Off

In many ways, 2011 is shaping up to be the year of 4G. Although Sprint launched its 4G network several years ago and Verizon went live with its own next generation network late last year, this is the year that phones and other 4G devices have finally become widely available. With each of the major carriers claiming to have a 4G network, Open for Business investigated to find out who offers the best choice for fast Internet access on the go.

Making Sense of 4G
The first matter complicating the search for the perfect 4G service is that there is not one thing meant by the term 4G. Sprint (along with partner Clear) and Verizon come closest to adhering to the technical standard for 4G with their respective WiMAX and LTE networks. However, most people care more about speed than how that speed is achieved, which led first T-Mobile and then AT&T to start referring to their upgraded 3G networks as 4G as well.

While it would be easy to fault the latter two companies for muddying the waters in their marketing, in fairness, their marketing actually makes some sense: while AT&T and T-Mobile both use what is technically a suped-up version of their existing 3G standard, HSPA, that technology can go as fast or faster than early 4G implementations. (AT&T is also preparing to launch its own LTE network in addition to its existing network it is presently calling 4G.)

To put it simply, there are essentially two meanings to 4G today: the technical one and the common one, the latter referring to cellular Internet technologies that can run at speeds competitive with DSL or cable Internet. Ultimately, that is what people generally want out of a 4G network and so, to some extent, the AT&T and T-Mobile are not that far off in their labeling.

Just sorting through the technologies is complicated enough, but it gets worse: performance depends on far more than the technology used by the network. Think for a moment about the Wi-Fi router you likely have in your home – the little box, possibly with antennae, you’ve all but forgotten about – that transmits your DSL or cable Internet wirelessly to your computers, gaming systems and so on. What really matters when it comes to speed is not the router itself (virtually any one available in the last five years could easily keep up with even the fastest consumer connections) but the connection from your Internet provider.

If you imagine cell towers as Wi-Fi routers, and what is known as the “backhaul” as your cable or DSL provider, you have a pretty good idea of how data flows over a cellular network. This means one can have a phone that establishes a 4G connection and yet is easily left in the dust of a phone with a 3G connection to a superior network.

How the Networks Stack Up Across the Map
Over the course of several months, OFB Labs sought to answer that question (and the 4G coverage question) by taking 4G devices from AT&T, Verizon, Sprint and Clearwire across hundreds of miles of urban, suburban and rural countryside throughout the Midwest, testing to see which network delivered the best coverage and speed. We had hoped we might achieve a relatively straightforward answer, but it became clear the answer was more complicated than we first imagined. Which network is “best” depends a lot on where one is located. 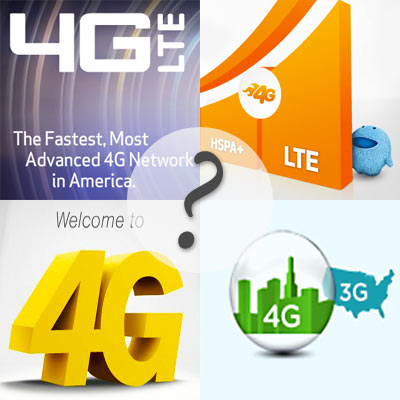 The networks prepare for battle.

Verizon’s broad 3G coverage and strong backhaul work ensured that we picked up very acceptable speeds of at least 1Mbps virtually everywhere we tried it. Even in rather difficult situations for cellular coverage, such as the Ozark Mountains of Southern Missouri and Northern Arkansas, Verizon’s devices provide speeds that are at least as good as a basic DSL connection.

With strong 3G coverage accompanied by good 4G coverage (in certain cities) that offered the fastest connection speeds we observed, the big red V network has a lot going for it. As we reported in our review of the Thunderbolt, we saw download speeds often reaching the neighborhood of 20 Mbps (equivalent to an upper tier cable or DSL Internet package) and upload speeds that hit a mind blowing 40 Mbps.

We only fell back to a 2G connection a handful of times on Verizon’s network and only in a few especially problematic locales where the phones struggled to make a connection. Notably, we noticed more variance from device to device with Verizon’s network than with the others we tested; the Droid Charge ran significantly slower than the HTC Thunderbolt. The former at times drifted down to 3G-like speeds on the 4G network.

AT&T, unlike Verizon and Sprint, retains a very large rural area still serviced by its respective 2G technology, as opposed to a 3G network. This means that in many smaller towns – and even one mid-sized college town we visited – AT&T devices run at less than half the speed of the average DSL connection. On the other hand, because AT&T’s rechristened 3G network is already capable of speeds faster than Verizon’s or Sprint’s 3G network, and that “4G” network is much larger than its competitors’ 4G networks, it does have some advantages to offer its users.

For example, in several rural test locations, we saw AT&T 3G/4G coverage deliver speeds of over 2 Mbps and, at one point, even 5 Mbps – a threshold normally associated with 4G technology. One of the very nice benefits of the more evolutionary approach AT&T and T-Mobile have adopted is that even 3G devices, such as the iPhone, can achieve 4G-like speeds in areas unlikely to be covered by true 4G for some time. An AT&T spokesperson told OFB we could expect further speed gains in the coming months as AT&T's backhaul upgrades continue. In some sense, by those companies’ usage of the term 4G, devices such as the year old iPhone 4 are 4G devices, at least when connected to towers with improved backbones.

And perhaps that is perfectly acceptable: as Juliet would surely have noted – had her attention been focused on phones – 4G speed by any other name is still as fast. If an iPhone 3GS is able to go as fast as many “proper” 4G devices (and in certain settings we observed that its download speeds were comparable), whatever it might be called, we’re quite happy with it. There is a caveat here, however: while AT&T is succeeding in boosting download speeds, its upload speeds continue to lag at present while network upgrades continue, providing a tenth of the average speed we saw on the other 4G networks. This means receiving content is speedy, but sending data is still much as it was in the past.

When it comes to 3G service, Sprint’s network is technologically the same as Verizon’s and in the city offered similar speeds to what we saw on its larger rival. In rural areas the story was different, however, with the Sprint devices we tested typically operating at about half the speed we observed from Verizon’s 3G network – somewhere around a 500 Kbps to 1 Mbps. In a few places – including a rural locale where AT&T snuck out a remarkably good 5 Mbps connection – we were unable to establish any sort of connection using Sprint’s network. That was the exception and not the rule, however.

Where Sprint and Clearwire have deployed 4G, Sprint’s performance was remarkably good. The network never reached the sorts of ultra fast speeds we saw in a few cases with Verizon’s network, but we found Sprint’s 4G predictable in the best of possible ways: it was consistently fast, giving us 5-10 Mbps in most tests and working in a few places where Verizon’s 4G LTE network choked up.

All of this boils down to what may seem obvious: what really matters is the coverage in the places you need coverage. Each network has dead zones and each one performed best in different locations.

Other Factors to Consider
Of course, choosing a network involves more than just the network itself. Battery life is always an important matter when considering mobile devices and this is the area where the true 4G networks – Verizon and Sprint – are weakest. They offer the fastest devices, yes, but because these nascent technologies are still relatively new, we found these devices guzzled power much faster than 3G phones. Currently, assuming light to moderate usage, one should expect that a 4G WiMAX or LTE phone will need to be charged every day.

Since the HSPA+ chipsets used by AT&T and T-Mobile are improved versions of already refined designs, these “4G” (nee 3G) phones typically are somewhat slower, yet they yielded much better battery life.

The data plans offered by the carriers are also worth considering. Especially if one plans to use a mobile hotspot function on a phone (or get a dedicated portable hotspot) for connecting Wi-Fi devices on one of these 4G networks, data usage restrictions can rear their ugly head with unprecedented rapidity.

AT&T has dumped unlimited use plans entirely (save for grandfathered existing customers) and Verizon appears to be preparing to follow suit. Alarmingly, because Verizon’s LTE network performed so well in our tests, one could – in rare cases – burn through one’s entire standard monthly data allowance in about a half hour. Even a medium quality Youtube stream can eat through quotas with gusto. With AT&T the data cap could be hit in about the time it takes to watch an average movie on Netflix – two and a half hours.

This is where Sprint and its partner, Clearwire, are unequivocally strongest: Sprint continues to offer unlimited 4G service and, given that 4G is being promoted for high bandwidth uses such as video conferences, frankly, this simply makes sense. While all the 4G networks provide speeds that are ideal for multimedia, only Sprint and Clearwire are offering plans seemingly designed to allow subscribers to regularly consume multimedia over 4G and they deserve a lot of credit for that.

In summary, each network we tested has strengths that make it worth considering for certain use cases. For overall network ubiquity and average speed, Verizon won hands down. On the other hand, AT&T’s 4G-leaning 3G network offers the largest coverage area right now for reaching speeds close to 4G and does so with devices that provide much better battery life, at least for this present generation of phones. Finally, Sprint offers highly consistent speeds within its 4G network coverage and, for those staying within the bounds of that 4G coverage most of the time, offers an unlimited plan that allows one to take full advantage of that high speed network without fear of running into overage charges.

Yes, the 4G wars are still in their infancy; nevertheless, 4G is already good enough to be worth considering taking advantage of right now. While the advantages and disadvantages of each network make choosing the right 4G service for one’s needs something of a chore, one thing is clear: the days of laggy cell phone Internet are finally coming to a close.

Also Filed Under: Home: Technology: The Showdown: the 4G Contenders Square Off

Re: The Showdown: the 4G Contenders Square Off

Incredibly well written article. Thanks for an honest comparison

Re: The Showdown: the 4G Contenders Square Off

There should also be a distinction as to if this is used for a phone or a mobile broadband device that powers an iPad or laptop. For the latter, Verizon is usually the best, with Sprint next if, and only if, they have 4G coverage where you need it. Otherwise, T-mobile or ATT would be next…Although ATT doesn’t even show 4G coverage on their maps…weak!