The View From Mudsock Heights: We Have Our Own National Geographic Specials Right Here

The day was sunny and warm at the Lake Placid, New York, horse show, the skies clear as can be. The altitude lent a certain dry coolness to the air — it didn’t feel as hot as it was — and made sunburn likely.

Waiting to take pictures of someone I knew who was riding the course, I glanced down at one of the yellow wildflowers that grew all over the place. Then I saw a bit of movement that shouldn’t have been there. I looked closer and was amazed: at the center of one of the flowers was a crab spider. It was the size and shape of many other crab spiders I’ve seen — you’ve seen them, too — but this one was different. It was bright, even festively, yellow, the same bright yellow as the flower itself. It blended in perfectly. If it hadn’t moved, I never would have noticed it. Its prey doesn’t notice it, either, which is of course the idea. Not that the spider made the decision itself. 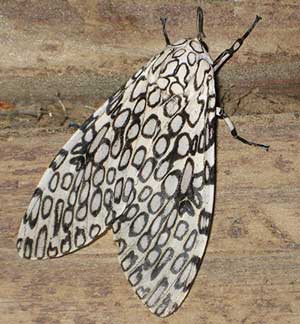 Its possible to go on and on about the number of generations of crab spiders that were necessary before one came about with that adaptation, became suited to live in that kind of flower and that flower alone (unless it can change colors; I have no idea if there are any spiders that can do that). Indeed, many people who know far more than I do have done that very thing. I can offer no improvement on their work.

No, I’m just a spectator here. But if one is even a little observant, being a spectator is often rewarding.

A few years ago I was on the porch swing, working on a banjo, no doubt, when I noticed what I thought was a yellowjacket wasp on the deck board near my feet. Closer inspection, though, disabused me of that notion. It was instead a spider, its abdomen a perfect replica of the abdomen of a yellowjacket. Had it evolved in this fashion to fool its prey? Or was the coloration and shape designed to prevent it from itself becoming prey (to, say, the mud dauber wasps who raise their little wasplings on spiders)? I have no idea.

Spider adaptation is interesting stuff, but even more fascinating to me is the same phenomenon among moths. 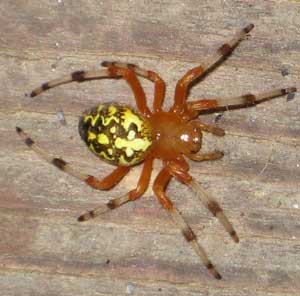 We’re all accustomed to the standard gray moth. It’s an inch long, has a fat body, and flies into the house at the slightest provocation, to flutter around the lamps, be maddeningly difficult to capture, and ultimately be vacuumed up later, when dead on a windowsill.

But there seems to be another side to the generic gray moth: the wildly dressed party moths that you’ll find if you pay attention. I first became aware of them when one day, again on the porch, I saw one on the side of the house, in the shade. It resembled the gray variety as to size, but it was very light gray with dark brown ovals all over it. It stood out against the brown wall. It was in fact pretty striking (and pretty pretty). But it was easy to imagine how difficult it might be to see if it were, say, on the trunk of a big sycamore tree.

Then, last week, I was at my friend Nelda’s house for a cookout. I’d gone down to fetch the hamburgers Matt was grilling when I noticed, resting on Nelda’s car, what I have named the Easter-egg moth because the only place its coloration would blend in very well is an Easter basket. Its furry fat body was the same pastel yellow usually found on appliances from the early 1970s — I think they called the color “sunburst” — with wings banded in pink and white. I immediately wondered what in the world it could have been thinking. (Of course, it was thinking nothing. It’s a moth, for Heaven’s sake!)

I’m still puzzled as to the natural history of the pastel moth, though — nothing obvious comes to mind. My best guess is that it’s flower-related, but still. 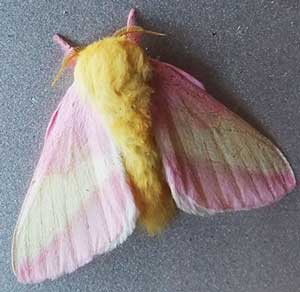 I wish I knew enough entomology to be able to say something intelligent about the oddly adapted spiders and moths, but I don’t.

Yet there’s something useful to be learned.

We’re all seen various television shows that illustrate the amazing adaptations of small critters in the oceans and the jungles of the world, bugs that look like leaves, sea horses that look like seaweed, that kind of thing. Those shows can be fascinating and fun to watch.

But we mustn’t overlook — literally — the equally amazing bugs we have here. The most obvious example is the walking stick insect. There are, as I discovered, many others.

You wouldn’t normally think it. Here in the Midwest we don’t have the kinds of wonders you see in natural history programs, right? Don’t believe it for a minute!

If you take the time to look around, you’ll discover that you have your very own National Geographic special right outside your door.

Also Filed Under: Home: Culture: The View From Mudsock Heights: We Have Our Own National Geographic Specials Right Here
Please enter your comment entry below. Press 'Preview' to see how it will look.