Today opens up WWDC, Apple’s Worldwide Developer Conference. Apple has confirmed three major foci for the conference this year: iOS 5, Mac OS X Lion and iCloud. Word on the street points to major Twitter integration in the core of iOS as a key component to iOS 5, something that sounds interesting, but hardly earth shattering. Let’s go a step further: what if Apple’s Twitter integration work was a step towards an Apple purchase of Twitter?

While ostensibly a conference focused on software creation (and, indeed, much of it is), WWDC remains the one regularly scheduled conference (as opposed to special press conference) that Apple uses as a platform to launch new products. This year Apple did something very curious: instead of teasing the world about what would be unveiled, the usually secretive company offered up the aforementioned three products a full week before Steve Jobs’s keynote.

It could be that the company simply wants to set expectations (relatively) low so that the notable absence of a new iPhone launch – breaking a tradition started by the original in 2007 – would cause disappointed analysts to miss the interesting things that are announced.

Or, it could be Apple has something so big planned they can pre-announce the main topics and even launch iWork for the iPhone a week before the conference without any fear of stealing the excitement of what actually will be announced.

Tight, officially sanctioned Twitter integration admittedly would be a major coup for Apple, notably because Twitter continues to stumble and make third party integration with its services more difficult. While Twitter stands a lot to gain, if the service provides Apple with tighter integration than is available for Google and its Android allies, iOS 5 could help a great deal to draw Twitter users to Apple’s fold.

However, it seems odd Twitter would willingly grant Apple such access at the same time it seems to be trying to kill off other third party access methods (and angering both its users and developers for doing so). That Apple, which doesn’t necessarily need to bet the farm on a particular service would decide to focus a release of iOS on integration with a partner service that has been acting so erratically is also surprising.

On the other hand, San Francisco-based Twitter is in some ways Jobsian in its apparent trajectory, if not its poorly plotted means of getting there. Jobs’s company located down the coast in Cupertino has also had a long history of suspicion of third parties – Jobs famously killed the Mac clone makers upon his return to the company – and has become the epitome of minimalist approaches to product design.

Why would two companies suspicious of third party dependencies take such an extreme step and collaborate on a Twitter integrated mobile platform? Perhaps because the one company is actively preparing to consume the other. 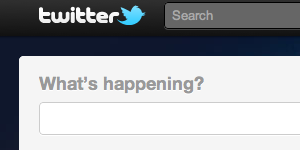 Could this box help Apple?

Twitter has long been a target of acquisition speculation. Companies such as Microsoft and Google would love to own the only general social network able to seem relevant in Facebook’s shadow. But, philosophically, Twitter’s minimalism seems a far better match for Apple than for either of the other giants, both of whom would have a much harder time resisting the temptation of turning Twitter into a full fledged Facebook clone.

With Apple’s own iTunes Ping and Game Center social networks relatively irrelevant at the moment and Facebook following a more Microsoft-esque, kitchen sink approach to choosing features, a Twitter acquisition may be the only logical way for Apple to control its social networking destiny without ending up running a platform that is decidedly unlike its own design philosophy.

Twitter’s actual network could also provide the glue to make Apple’s other social efforts relevant. As a matter of fact, it already is: the one thing that makes Ping interesting at all is its ability to tweet Ping comments to Twitter.

If Ping and Game Center were to actually integrate fully with Twitter, maintaining separate identities yes, but with a common profile and login paired with thoughtful places of overlap, Apple could have something that is able to achieve much of what people want Facebook for without becoming nearly as bloated.

Twitter’s recent isolationism from third party tools actually makes sense if the company were being groomed for such an acquisition. While a service that is entirely integrated with unofficial tools offers questionable value to a company like Apple, if the only way to get the best Twitter mobile experience was with an iOS device, Twitter could finally provide the one essential asset it presently lacks: a clear business plan. The social network has stumbled to find a good way to turn its popularity into revenue, but if it were Apple owned, its loss leader status for iOS devices would likely be enough.

Is all of this far fetched? Perhaps, but maybe not as far fetched as one might think at first glance. After all, no one expects Google to stop adding social features to Android, and with hoards of cash waiting to be spent, Apple could decisively leapfrog its nemesis in one swoop.