The View from Mudsock Heights: When Men Were Men, Radio was Radio, and Tape Editing was Tape Editing

The email message was a happy surprise. A fellow in California, at something called the “L.A. Theatre Works,” was putting together a project (he did not say what) and wondered if I still have the original tapes (I don’t) from a radio report I did in 1983. His email note to me was above a long series of messages and replies he had sent to and received from others, in pursuit of the missing audio.

When first I saw it I was skeptical, as wise users of electronic mail soon become. The subject, “Fwd: Grenada 2,” is the kind of thing you usually see atop a pidgin-English letter purportedly from the dying widow of the governor-general of Nonexististan in which she says she possesses millions of dollars she inexplicably wants you to have. Nor did I recognize the name of the sender. In retrospection, it’s a wonder I read it at all, though I usually give even the most bizarre scam-spam messages a glance, because they can be amusing.

I’m glad I read this note, which was legitimate.

Its writer, Myke Weiskopf, had gotten in touch with the Dutch international radio service, Radio Netherlands, in search of a report that had been broadcast lo, these almost three decades past, about the radio broadcasts from Grenada during and immediately after the U.S. invasion of that small Caribbean island. (The invasion was generally seen as a good thing both by the international community — not counting, of course, the United Nations — and by the Grenadians themselves. U.S. Marines as well as Jamaicans and something called the Regional Security System had gone in to put down a Communist coup led by the automotively named General Hudson Austin, and to rescue young American students at a medical school there. It even figured in a movie, 1986’s “Heartbreak Ridge,” starring Clint Eastwood.) 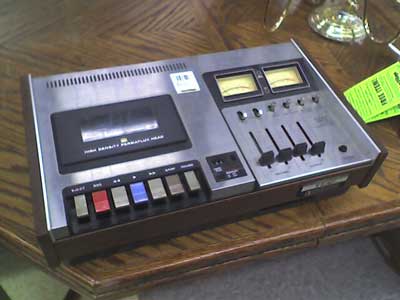 At the time, I was a radio news guy in New York. For fun, I was also the New York correspondent for “Media Network,” a weekly program on Radio Netherlands that kept shortwave radio listeners informed about events in the world of broadcasting. Its host and producer, Jonathan Marks, asked me if I could do a little piece on the Grenada conflict.

Until I got the email note, I had forgotten I’d done the story.

Though it can be and often is annoying when someone adds a few lines to the top of a message that includes an entire conversation repeated below it, this was an exception. “Dennis Powell was working at WOR at the time,” Jonathan Marks had written. “This was mostly a labour of love - we only had pocket money.” Farther down was a link where, temporarily, the entire program from that week in November 1983 could be downloaded. On a whim I clicked the link and after awhile — the file was more than 40 megabytes — I could listen to the show.

I was surprised that mine was the lead story. My report went on for several minutes and contained many bites of sound. (When you see the phrase “sound byte,” it is an error. Long before we had computers and bytes, we had in radio the phrase “sound bite,” meaning a nibble taken for air use from a longer interview.) I was actually kind of impressed.

The reason is, putting stories together back then was not easy. While I had editing facilities at work, I did not use them for things I did for Radio Netherlands. Instead, at home I set up two Sony TCM-5000 portable cassette recorders wired together. One was used to play back the recorded “actualities” — the sound bites — while the other was to record my report, so it had both the first tape deck and a microphone plugged into it. I recorded the part leading up to the first bite of sound, then hit pause. Having already queued up the first actuality and paused it on the first machine, I’d then hit pause on both machines, recording the part I wanted onto the second, next to my voice. When the sound bite was over, I’d hit pause on both machines again, then un-pause the recording machine and read the next part of the report leading up to the next bite and hit pause again.

Because the next bite was most likely on an entirely different cassette, I’d then have to empty the playback deck, put in the new tape, find the bite, and continue. It takes a long time to explain, but it took a lot longer to do — longer still if, say, a fire truck went past while I was recording my narration. And I had to be watching the volume on all the bites, and on myself, so the levels would be consistent.

Somehow, it sounded pretty good despite it all.

The experience makes me realize that I am turning into my grandfather. I found myself thinking, these kids today don’t know how easy they have it, with all their digital doo-dads, gadgets, and gimcracks.

Hi Dennis. How funny to find you've written a whole story about our little exchange! Yes, I was duly impressed with the editing on the Grenada piece, and I'm old enough myself to have inherited a reel-to-reel deck from my dad in my nascent recording-engineer days. But if you'd like to hear the finished Grenada piece (using some audio I managed to acquire elsewhere), I will gladly offer it to you or any of your readers

Great piece Dennis and glad that it worked out. The old shows are still on-line at www.jonathanmarks.libsyn.com. About 120 blasts from the past.