The View from Mudsock Heights: I Remember Mr. Biellier for More Than the Egg A Day Chicken

My cousin Alan in Missouri sends news that Harold Biellier has died. The report made me sad. Not because it was a tremendous surprise: Mr. Biellier was 90. Nor was he someone critical to my day-to-day existence: I doubt I’ve seen him even once in the last 40 years. I know I haven’t in the last 35.

But Mr. Biellier’s passing is another piece of my childhood that is gone.

Harold Biellier was an agricultural researcher. The obituary notice tells us that he was “responsible for the research and development of the Egg A Day Chicken.” He was also a neighbor. His son Wesley was among my friends as I was growing up, and the family was among the reliable attendees at neighborhood events, of which we had several each year. He had cows and we would get milk from him, in wide-mouthed glass gallon jars with the cream at the top, even as we got eggs from Joe Crane, who brought them around in a bucket he carried on his horse each Saturday, three dozen for a dollar.

I remember him mostly, though, for his contribution to a high point in my career as a scientist. 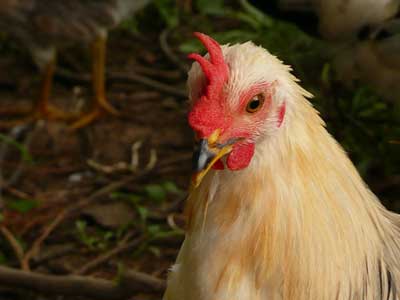 For some reason I had gone one weekend with my grandparents to an agricultural fair. This was the kind of thing that could be boring to a fifth grader — what kind of fair is it that has no rides? But we find our amusements where we can, and I soon discovered a display of eggs that fascinated me.

The reason is, the eggs looked entirely normal until they were cracked open. Even then they were pretty much normal but for one thing: the yolks were bright red, or blue, or green. This was the greatest thing ever! I made inquiry and was told that if the chickens were given something in particular to eat, they would produce eggs with brightly colored yolks. I carefully filed this information away for later use.

Later use came in seventh grade, when our little science class began to poke into biology and chemistry. Children in the 1960s had a wonderfully inflated view of the powers of those two sciences. We thought, for instance, that the only reason no one had grafted the head of a monkey onto a dog was that no one had thought of it or else there was difficulty in obtaining the monkey. But if anyone had, they could feed it chemicals and soon it would have superior power and intelligence.

This optimistic view of science and my general tendency toward things that would be disruptive led me to propose to my teacher that I undertake an experiment. She, poor gullible thing, agreed. I would, there at my school, cause chickens to lay eggs with yolks of unnatural colors.

My father had a saying, “If we had some ham, we’d have some ham and eggs if we had the eggs.” It’s appropriate in this case, for I had no idea how to cause chickens to lay these miracle eggs. Also, I had no chickens.

But Mr. Biellier, good neighbor and chicken expert that he was, lived nearby. I phoned him and told him of my amazing plan. The only problem, I said, was an absence of poultry. He arranged for me to be granted three or four big white laying hens from the University of Missouri.

In our puny chemistry class we had seen how various substances would, when placed in the flame of a Bunsen burner, change the color of the flame. I figured that what worked in the fire would work in the chicken: feed the chicken those substances and soon the eggs would assume colors corresponding to those above the Bunsen burner.

It didn’t work. Another call to Mr. Biellier.

He acquired for me capsules of something called “fat-soluble dye.” These needed to be force-fed to the chickens and, after a few days of doing this the egg yolks would begin to change color. The dye had not been approved for human consumption, he warned me, ruining, in my estimation, the whole purpose of the exercise, which would be to surprise people at breakfast.

Big chickens can make a considerable fuss when asked to eat something they do not care for, and they had no appetite for gelatin capsules filled with bright red and blue powder. But with the assistance of friends — it was like being baseball team captain at recess, picking them — the capsules were gotten down the gullets of the fowl. And, amazingly, a few days later the chickens were producing red- and blue-yolked eggs (and one that laid purple eggs, because we forgot which color we were giving her halfway through).

So the experiment turned out exactly as I hoped: it was amazing and disruptive and we learned nothing from it.

Despite having been warned, my teacher took the excess eggs home and fed them to her family. Last time I heard, they were all still alive and well, but that was decades ago and who knows what the long-term effects might have been.

Tags: the view from mudsock heights
Also Filed Under: Home: Technology: The View from Mudsock Heights: I Remember Mr. Biellier for More Than the Egg A Day Chicken