Those Strange Hebrews: A Dialogue on Deities

In today’s discussions of religion, we often forget how radically different the idea of a single, all powerful God, espoused by those faiths that hail back to Abraham, really is. What might a typical member of the “more enlightened” Greek culture during the time right before the fall of Judah in 587 B.C.E. have thought about the monotheism of the Bible? OFB’s Timothy Butler “listened in” on such a discussion.

My Most Excellent Paulos,

After leaving the Assembly the other day, I took the long way around Athens before returning to work. During my walk, I ran into one of those who is known as a Judahite, that is, a Hebrew from the Kingdom of Judah. It seems his country is in turmoil, embattled by some of the barbarians of the latest empire in the East. He appeared weary, so I thought it kind to take his mind off worldly troubles by asking about his culture. Now, my friend, let me assure you I am no dealer in foolish ideas, so I never thought that my innocent attempt at friendly discussion would reveal such troubling aspects of the Judahite religious cult.

Just to give you, most excellent Paulos, fair warning, I feel I ought to let you know that I found out that those from the Kingdom of Judah are somewhat backwards compared to us, enlightened Greeks. The Judahites have many odd cultural laws and mistakenly look down on us since they do not know that Athena herself competed in a competition so as to be our patron goddess. The ignorance I report is far greater than I ever would have guessed – they are also ignorant of the fact that the great Zeus looks kindly on us. I say this that you might not be too shocked or dismayed by their stories.

After conversing with this fellow he began to explain to me the story that comes from their sacred scrolls as to how the world began. I told him I was already quite familiar with the origins of the world but I would be interested in hearing if his people had any additional stories on the interaction of the gods and their creation of things on the Earth Mother. I thought that was a simple enough question, after all, while our neighbors in other parts have corrupted the names and some of the history of the gods, their stories show that they aren’t that far from the truth.

However, this fellow looked at me in shock, Paulos, and said the most ridiculous thing to me. Brace yourself for this, most excellent Paulos, here is what he said:

We, dear sir, do not worship the earth, for the earth is just a creation not a goddess. Our prophets have told us that Adonai, our Lord and God, is the only God. Yea, even God himself has told us such when he spoke with Moses ages ago. We are not to worship other gods or idols, and in fact, those other “gods” do not exist.

Now Paulos, I have an open mind, and I know that many cities and states have a certain god or goddess that has taken fancy with them, if it were not true, why would I stop and worship the image of the gray-eyed goddess, Zeus’ most excellent daughter, herself? Yes, I have an open mind, but the insanity that came out of this fellow’s mouth completely stunned me. 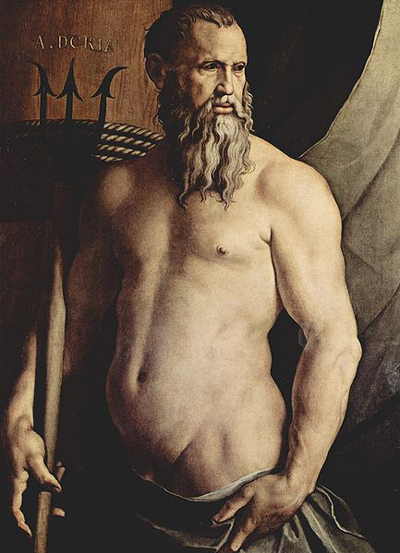 CREDIT: A painting by Agnolo Bronzino.

While I had a hard time listening seriously to this man, I do not get to talk to a Judahite every day and so I asked him to explain the origin of things to me if what he said were true. According to this fellow in the beginning was nothing other than their god. Their god did not create any other gods or goddesses – he created everything out of nothing, completely by himself. Can you believe they actually think that one divine being could create everything? Now, you know as well as I do how all of the creation we know has come from Gaia and Chaos. You further know that from Gaia’s linage came the current king of the heavens, Zeus.

This Hebrew also asserted another ridiculous idea – something about a thing he called the downfall of man. He claims that the first humans, whom he called Adam and Eve, went against the rules of their god, and since then all of humanity has been marred by imperfection. While I found it hard to believe, he was actually denying the power of fate and attributing our situation to some form of righteous judgment!

Oh, but the most backwards thing of all, excellent Paulos, was his assertion of how his god created. I remember it vividly, he said to me, “Adonai spoke the creation into existence, and through him everything was made, without him nothing that was made was made.” At this point, my friend, you can surely understand my shaking my head in disbelief. I could not help but be entirely incredulous! I asked him, who guards the waters and takes favor or disdain upon sailors if not Poseidon? Who guards the gates to the land of the dead if not Hades?

This fellow tried to convince me that his deity, being omnipotent, was capable of guiding and controlling the whole world down to the minutest detail, but of course my sensibilities prevented me from being taken by his unsophisticated talk. We parted shortly thereafter and even though it has been days since this conversation, I still cannot get over such babble – no wonder the world admires our philosophy! Watch out if you encounter one of those Hebrews, most excellent Paulos, they are very odd indeed. Atheists, if you ask me.

Re: Those Strange Hebrews: A Dialogue on Deities

This Hebrew also asserted another ridiculous idea – something about a thing he called the downfall of man. He claims that the first humans, whom he called Adam and Eve, went against the rules of their god, and since then all of humanity has been marred by imperfection. I will never agree with that….