The Obama Doctrine: A Principle Objection

This week’s attacks on Libya were summarized well by one Phineas X. Jones, who tweeted, “If I told you in 2007 that in 2011 we'd be killing Soc. Security, torturing Americans & bombing Libya, who would you guess won the election?” The Obama Doctrine is taking shape, but suddenly it is looking more like the Bush Doctrine Remixed. Is it?

The 2008 presidential election was about quite a few things, but most of all, it was the voters’ rejection of the Bush Doctrine. In place of an administration that had crafted an explicit policy of preemptive strikes against those whom it felt endangered the United States, talked of the “axis of evil” and argued for taking an active role in bringing about democracy around the globe, the Obama campaign promised a humble, European-style foreign policy aimed at respecting the international community.

This was the hallmark difference that catapulted President Barack Obama above the obvious heir to the Democratic nomination, then-Sen. Hillary Clinton. Open for Business contributing editor Jason Kettinger called the 2008 election a foreign policy election, even after the recession took over the headlines in the final weeks of the campaign. In the end, it appears he may have been correct, though not in precisely the way anyone would have guessed. 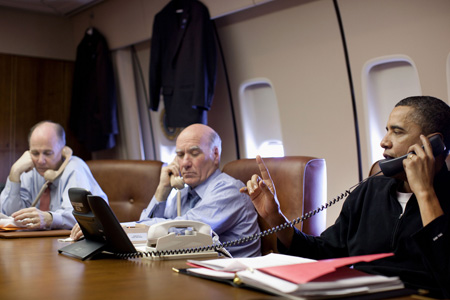 As Mr. Jones observed in his tweet, the emerging picture of the Obama Doctrine is sounding increasingly like an extended Bush Doctrine. Curiously, the president even green lighted the beginning of a startlingly Iraq-like mission eight years to the day that his predecessor oversaw the beginning of Operation Iraqi Freedom.

However, the problem with the Obama Doctrine that is taking shape is not its similarity to the Bush Doctrine, rather it is the dangerous way it is striking parallels to the worst of Bush-era foreign policy, without the upside. Preemptive strike is a dangerous, but reasonable policy inasmuch as one is dealing with a rogue state where the normally reliable policy of mutually assured destruction cannot achieve détente. So the fact that the administration has chosen to strike unprovoked is not necessarily the problem. Rather, the problem with the Obama Doctrine is a lack of direction that is taking that risk-laden idea and exponentially increasing that risk.

The rightness or wrongness of the Iraq invasion aside, clearly the invasion bequeathed the United States a font of new enemies. When choosing to take an action almost certain to create enemies, one at least should have a clear goal that can be weighed against the cost. Operation Iraqi Freedom had a clear goal, as flawed as it may have been.

The call by many in the Arab world, Europe and the United States for a no-fly zone in Libya also provided a clear goal: preventing genocide by the despotic Col. Muammar Qaddaffi. Given the broad coalition that formed rapidly, the president was given an opportunity to make a positive preemptive choice that would also cement a post-Bush internationalist agenda.

Instead, the administration allowed America to sit dumbfounded for weeks while Mr. Qaddaffi was able to strengthen his position (not unlike how the administration struggled to figure out something to say about the Egyptian Revolution).

Finally, when the president did take action, he discarded the opportunity to make a truly multilateral response that would even be supported by many in the Arab world – forming the no-fly zone – by overseeing extra attacks that seemingly have moved the United States from performing a humanitarian mission to being a belligerent. Further, by committing to not using ground troops, the president has ensured the United States can accomplish very little more than a mere no-fly zone would have, only at much greater monetary and diplomatic cost.

The U.S. will now have a much harder time extricating herself from a protracted war and faces that prospect without any clear sense of how these bombings might translate into victory – what would victory look like? The internationalist policy would have left Qaddafi and the rebels to tend to their own fight while preventing massive genocide; a true Bush-era action would have dramatically moved to unseat Qaddafi. The Obama Doctrine does neither.

These latest machinations by the administration have indeed demonstrated that there is an Obama Doctrine and, yes, like the Bush Doctrine, it apparently includes largely unilateral, preemptive actions. But is it merely a rehashing of Bush’s policies? No. The Bush Doctrine was decisive and directed to a fault; when the same unilateral willingness staggers about in indecision and only finally takes enough action to make people angry, it is something far different and more dangerous.

Why would the allegedly diplomatic president choose such an unenviable position? Because there is a critical difference between the Obama Doctrine and the Bush Doctrine: the guiding principle. In the case of the Obama Doctrine, there isn’t one.

Also Filed Under: Home: Culture: Politics: The Obama Doctrine: A Principle Objection
Please enter your comment entry below. Press 'Preview' to see how it will look.