The View from Mudsock Heights: Remembering the Worst Vacation Ever

Last week I saw a station wagon pulling a little travel trailer and I shuddered. Here’s why. The word “vacation” had always meant a trip to see relatives in Indiana or Nebraska or Pennsylvania. So my two sisters and I were greatly surprised when our parents, after some of that quiet, almost whispered code conversation grownups sometimes have, announced that we were going to make a trip to Florida.

What’s more, we were going to make our trip towing and living in a travel trailer. We were excited — it would be an adventure!

As indeed it turned out to be, though not of quite the sort we had in mind.

We picked up our brand-new 13-foot Play-Mor trailer at the factory in Westphalia, Missouri — there was a factory discount — the first week of July 1965 and headed south from there. It was the day I turned 12; my sisters were younger: Janie was 10 and Emilie was 7.

U.S. Highway 63, which we were to take clear to Memphis, was a two-lane road. The highways after that would be no better. Our parents knew (though wisely they did not say) that just getting to southern Florida would take three days.

That was if everything went well. It didn’t.

We encountered tremendous thunderstorms in the middle of the afternoon of the first day, when we were in Arkansas. The wind and rain forced us to pull over; good, thing, too, because when we started again we soon had to steer around fallen tree limbs and other debris. The buildings along the road were flattened. A tornado had hit ahead of us, just about when we would have been there had we not stopped. 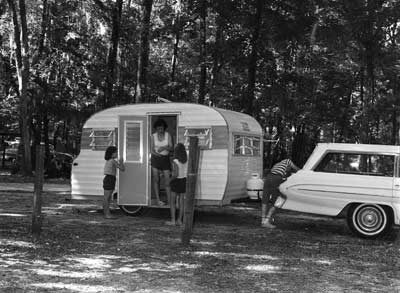 More than an hour behind schedule, we continued toward Memphis. There had been an accident on the bridge over the Mississippi River. It took two hours to get across. The stop-and-go caused the engine to overheat. This, in turn, caused my parents, my sisters, and me to overheat as well, both physically and temperamentally (and we would have been charitably described as “rambunctious” in the best of circumstances). My father was constantly surprised by the rear-view mirror, which with the trailer made it look as if we were about to be crashed into. My mother thought this was very funny, which did not help.

We were running so late that there was no hope of making the campground we’d planned on. The first night of our trailer vacation was spent in a motel.

The next day we got an early start. The miles rolled by until we all heard a strange bump-bump-bump sound coming from one of the tires. At a gas station we learned that there was a large knot on one of the rear tires. The station had no lift, and the spare was not in the best shape, so we limped along to Troy, Alabama, where there was a tire store that was by now closed. The second night of our trailer vacation was spent in a motel. We did not know and therefore could not appreciate our good fortune.

The third day was, surprisingly, a delight. We drove through areas covered as if by a blanket in kudzu, the Asian vine that somebody thought would be a good idea to turn loose in the south. By late afternoon we were passing huge live oak trees dripping with Spanish moss. Evening found us parked so as to stay in the trailer at Manatee Springs State Park in, yes, Florida.

My sisters and I went exploring. As the darkness and mosquitoes approached, we went back to the trailer, where it appeared our mom had been crying.

She hadn’t been. As the first person to enter our until-now-unoccupied trailer, she had discovered that in the baking heat, irritating chemicals used in the glues or insulation or something had filled the air. She had opened the many louvered windows and turned on a dinky fan, but it didn’t much help. We ate canned food we had brought along, and tried to sleep.

About which. There were five of us in a 13-foot trailer. Two beds were made by disassembling seating and dining fixtures — my sisters got one, my parents got the other. I was given a hammock slung across the ceiling.

The place reeked of what smelled like formaldehyde. There was no air conditioning. It was summer. In Florida.

Then it got worse.

Mosquito control thereabouts comprised a truck that came around and fogged the area with a combination of kerosene and insecticide. This was an instant headache for anybody who didn’t already have one.

So it continued for 12 days. We did have a good time during the day, visiting beaches and tourist spots and adding sunburn to our woes, before returning to our portable purgatory each night.

Some weeks after we got home, my dad wrote a piece about our trip for a trailer travel magazine. The shortcomings were largely glossed over. It concluded: “We learned a number of things on the trip, which we hope to use to advantage when we take another trip next year.”

The chief of these was this: we didn’t take the trailer.