The View from Mudsock Heights: From Cold, Snow, and Ice to Rain, Mud and Our Specialty, Floods

The mud across the road told me how lucky I’d been. It was last Tuesday and I needed to get to Columbus. It had rained a lot the day before, but somehow I had forgotten: it floods here when it rains a lot. Fortunately, the water had receded before I headed out. 267×400

In case the Tuesday lesson had been missed, there was Friday.

When I first considered moving to southeastern Ohio I came to visit, to check the place out. My initial thought was that maybe the county should change its name from Athens to Atlantis, so bad was the flooding. There was water in the WalMart parking lot and, I believe, across the main shopping thoroughfare. Some highway overpasses were actually bridges over submerged streets. One of the places I’d come to see was, in the words of a wry local, “last seen headed for Kentucky.”

I read somewhere at the time that it was the worst flood in 147 years, but research since then proves that this was not so, not even close. The 20th century saw some terrible flooding in Athens and Athens County, with bridges collapsing and many people killed.

As a result, I settled on a place that is on such high ground that if water ever threatens here, it’s time to build an ark and start rounding up the critters, two by two.

Part of the lore that comes with living here is learning the timing and manner of floods. For instance, I know that the water arrives — and recedes — a mile or so north of here a few hours before it does a few miles to the south. If I go north and there’s mud but no water, I know it’s safe to proceed. If there’s water, I can try heading south and maybe make it, but I’ll have to take the back-road, over-the-hill route on my return, and for a few days, even after the water has receded nearby, I’ll need to take the other route over the hill for a day or two. 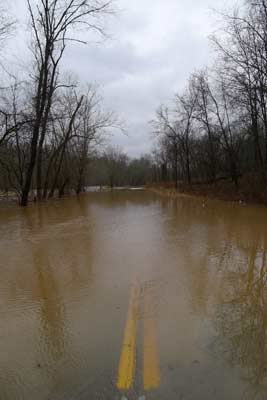 There have been maybe a dozen times since then that high water has been inconvenient or worse. I’ve never been entirely stranded — that would be remarkable, because there are multiple escape routes — but a couple of times I’ve had to take the long, long back route. One of the rules of floods seems to be that they occur only on days when I must go to town.

It helps to have a really good map.

As with all calamities, disasters, and widespread inconveniences around here, total strangers become instant friends. Cars stop to report whether or not “the road is out.” Observations are made, opinions are offered, and personal historical perspectives are given. I shall never forget the couple who stopped at the bottom of the hill as my neighbor Tom and I watched the normally placid Federal Creek roar past. They were laughing. It seemed that a nephew of theirs had tried to make it through some water “that doesn’t look that deep.” But it was that deep. He had escaped after a harrowing few minutes, but his car hadn’t. I presume it was found later, though I can’t imagine it was worth fixing.

Of course, it could have turned out far differently, and sometimes does.

I know of some farms around here that seem to spend an inordinate amount of time under water. It’s prime “bottom land.” It could be that it gets that description because it spends a lot of time at the bottom of the Hocking River.

But the farmers, best they can, make allowance for this. Sure, there are occasions when fields need to be replanted after a spring washout, which isn’t cheap. Farmers, though, are as tough as anyone you’ll find. They plan for and deal with the occasional flood, just as they do the dry summer, the lasting drought, the pest infestation. I admire farmers but I wouldn’t want to be one.

There were warnings of the floods that came late last week and over the weekend. Again, neighborliness underlined it. Every conversation included, “If you need anything, better get it today — flood’s coming.”

There is one thing that does puzzle me, though. The flood water rushing past is always light brown, the color of coffee that has been profaned by the application of cream, like a farm pond stocked with catfish. What makes it brown is soil. That soil has been washed away from … someplace.

That isn’t the puzzling part. The rain washes dirt down from the hills; here it’s carried down Federal Creek to the Hocking River to the Ohio River to the Mississippi River to the Gulf of Mexico. This is nothing new. We can safely assume that it’s been going on for thousands and thousands of years.

On mornings like last Friday, when there is a huge amount of land being swept away, you’d think the general trend is toward filling in the low places and washing away the high places.

Which makes me wonder: Why do we still have any hills at all?

Dennis E. Powell is crackpot-at-large to Open for Business. Powell was an award-winning reporter in New York and elsewhere before moving to Ohio and becoming a full-time crackpot. You can reach him at dep@drippingwithirony.com

Tags: the view from mudsock heights
Also Filed Under: Home: Culture: The View from Mudsock Heights: From Cold, Snow, and Ice to Rain, Mud and Our Specialty, Floods