The View from Mudsock Heights: Anniversary Reminds Us How We Blew What Might Have Been

Fifty years ago this May, Alan Shepard became the first American in space. Later this year, the space shuttle will fly for the last time, marking the effective end of the country’s manned spaceflight program. And right in the middle, 25 years ago last Friday, was the loss of the space shuttle Challenger, which broke apart 73 seconds after its launch, killing seven people and, unbeknownst to me at the time, consuming much of the next three years of my life.

I’d done some stories about the American and Soviet space programs for radio, first at WOR in New York, then at the RKO and, now, CBS networks. A child of the space age, I was both fascinated and disappointed by developments. It was hard not to be aware of how the shuttle had failed to live up to the promises made for it and how after our triumphant landings on the moon we had now parked in low-earth orbit, doing nothing of much use.

I also knew that informed opinion held that the space shuttle was a terribly compromised, dangerous machine. The disaster of January 28, 1986 was not a complete surprise.

The first television reports showed a parachute hitting the water and featured narration from a NASA commentator saying that paramedics had been dropped. That was the only mention of a rescue effort that we would hear. Instead there would be obfuscation and — I do not think it is too strong to say it — lies from the National Aeronautics and Space Administration for years to come.

It would soon be announced that the astronauts, including the first schoolteacher in space and a fellow who had been bumped from an earlier flight to make room for a senator who wanted a ride in space, had been killed instantly when the vehicle broke up. (It did not explode — that big fireball was exactly that: a fireball, hydrogen and oxygen burning in the thin air at altitude.)

That made no sense to me. The crew cabin was designed to maintain its integrity through far worse conditions than those which tore the spacecraft apart. So in my spare time I began poking around. CBS News was eager to accept the official NASA story. Yet people I knew in NASA told me that the crew cabin likely remained intact until it hit the ocean, the crew inside alive until contact with the water. 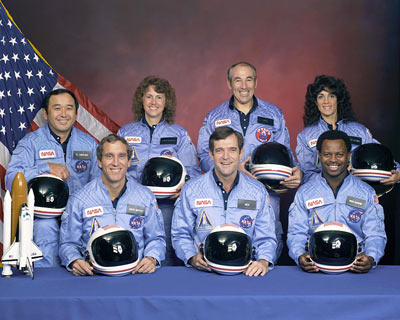 The crew of the Challenger.
SOURCE: NASA

A presidential commission was empanelled to investigate the disaster. Commission members to whom I spoke talked of a lack of cooperation from the space agency; one said that the commission’s chairman, William P. Rogers, had constantly to remind NASA officials to tell the truth.

The cause of the disaster was, it turned out, pretty straightforward: the launch had been in cold weather, and rubbery O-ring seals in the solid rocket motors had failed because rubber gets stiff when it’s cold. But the O-rings were not the only suspect. The main engines were far less safe than we’d been led to believe, and the thermal tiles that covered the shuttle were themselves an accident waiting to happen. (That accident would wait 17 years and four days. Then it would destroy the space shuttle Columbia, killing everyone aboard.)

NASA was not happy when contract divers from a salvage boat found the crew cabin weeks after the Challenger broke up. It was, as had been predicted, all in the same area, meaning that it had been intact until it splashed into the water. The crew’s emergency air packs had been turned on, or at least those that were not too damaged to tell had been. The crew was alive until it hit the water.

All of which NASA tried very hard to cover up. It was suggested to the agency’s investigators, including a few astronauts, that they lie about inconvenient discoveries. This did not sit well with them, they told me.

Over more than two years I worked to get that information together and to write it up, and in the fall of 1988 it was published in Tropic, the magazine of the Miami Herald, and elsewhere. It’s still online someplace.

The space program got rethought a bit. Twice, plans were made to take us out of low-earth orbit and return us to the moon and maybe beyond. But the same budget cuts that caused the space shuttle — once a brilliant plan to do something useful in space — to be in reality a cobbled-together collection of dangerous compromises kept manned spaceflight from again becoming anything interesting. Instead, we got a useless tinkertoy “space station,” and soon we will have lost the ability to launch people into space at all.

John F. Kennedy, inaugurated 50 years ago last week, in his first year in office challenged the country “to achieving the goal, before this decade is out, of landing a man on the moon and returning him safely to the earth.”

He might have added, “and then we can turn tail and run home, amid compromise and corruption.”

The Challenger disaster is a monument, but it’s not a monument to anything good.

Tags: the view from mudsock heights
Also Filed Under: Home: Technology: The View from Mudsock Heights: Anniversary Reminds Us How We Blew What Might Have Been