Another Christmas is upon us. Christmas carols are playing on radio stations, the decorations are sparkling and the shopping season is winding down. The first Christmas, of course, wasn’t anything like this: there were not any of the decorations and the merchants certainly had not been anticipating the day. On the first Christmas, the people went about their business oblivious, not recognizing the Christ. Decorations aside, is that really any different today?

The few people aware of the birth of Christ and interested in celebrating his birth were an unlikely lot. At first, shepherds, the bottom of the social totem pole in Israel, perhaps regarded slightly more highly than tax collectors, but perpetually ritually unclean and on the margins nevertheless. These were followed some point later by Gentile astrologers – the Magi or “wise men” – also an unlikely group to recognize the Jewish Messiah.

Even later in life, when Jesus started his ministry proper at age thirty, few recognized him for what he was. In Luke 4, the evangelist recalls Jesus speaking before the people of his hometown of Galilee. Blinded by the mundane, contemplating what this man, who had grown up under the ordinary carpenter Joseph, was saying, they could not hear truly hear what he was preaching. By the end of Jesus’s “sermon,” the people were trying to throw him off a cliff.

Within church going circles today, we often read passages like that and think about our own society. How are people today failing to recognize Christ and his message? At Christmas, there are a few touchstones that become clear: whether people say “Merry Christmas” or “Happy Holidays,” whether a city tries boldly to put up a nativity or favors a safer Santa statue. These causes have been championed under the banner of making sure people realize “the meaning of the season.”

But, Christ isn’t such a safe figure as to allow us to merely focus on what “the other” – those not putting enough “Christ in Christmas” – are doing. The failure to recognize the Christ in the Gospels falls closer to the failures within the Church than in society. 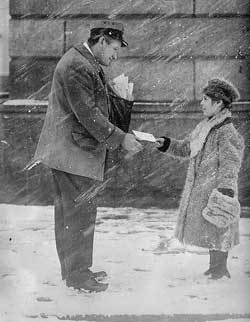 The people who rejected Christ in his hometown were not the irreligious tax collectors and sinners. They were not those too busy mowing the law or watching the big Jerusalem-Bethlehem football game to show up at synagogue. The people who were irate and missing the Messiah right in front of them were the good, church attending folk.

As we contemplate the mystery of God becoming incarnate in flesh, fully God and fully man, self-reflection is demanded of every person. How are we missing Christ this very season?

Christ came not to champion his own rights. Nor did he come to seek to bring himself the praise of the people. He did not come to form a powerful political movement or build a beautiful building. He came to proclaim the arrival of a different sort of kingdom, one formed by the joining together of all who believed by way of the Holy Spirit. He came to be humiliated and die for the very people who rejected him. He came to show God’s love.

And so today, as we hear the message of the birth of Christ, every Christian ought to reflect on how we too can humbly come before the world and show God’s love. And for those who do not truly put their faith in him, the question remains, what are you going to do with this child in a manger?

Christmas Day demands not our defense of the day, but our living out of the miracle of that day each and every day. When we do that — that is when we avoid overlooking the Christ right before us.