Now that Verizon is Going 4G, Should You Take Note?

Hours before Verizon officially unveiled its LTE service plans last Wednesday, I was invited to a preview event that the company held at the Kemp Auto Museum here in St. Louis. At the event, I was able to see the new network, which officially launches today, in all of its glory. With other networks having laid claim to 4G service for months or even years now, is the hype around Verizon’s new network justified?

There was something interesting and, perhaps, a bit jarring about the setting. Amidst beautiful, gleaming luxury cars from decades past, Verizon setup shop with an exhibit intended to show the press and certain customers its vision for the future of wireless technology.

The last time I saw LTE demonstrated, it had not yet received the Federal Communication Commission’s blessing to be broadcast over the air. To show off the technology despite that, I was invited into a little Verizon/Ericsson trailer where a development model LTE transmitter had been hooked up via wire to modems that were providing connectivity. 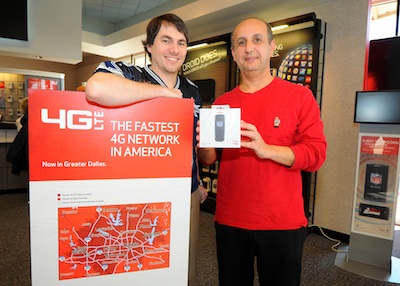 Inside that early LTE technology showcase trailer, one of the main demos involved showing multiple very high quality videos simultaneously playing without any hesitation caused by bandwidth constraints. All of this was very interesting, but (obviously) artificial.

The fact that the service was running over wires made me doubt such a demonstration would translate into real world wireless service any time soon. When the actual service appears, I told myself, they would never run a demo like that. And, of course, as I stood in the Kemp Auto Museum, they did not run such a demo.

They ran a more challenging one.

This time the demo was of a laptop that was clearly dependent on a tiny, near final USB LTE modem – no wires in sight – and consisted of running six high quality Hulu video streams simultaneously. Not content with merely impressive, the Verizon representative who was demoing the connection for me upped the ante. While allowing the videos to continue to run in the background, he opened another web browser window and loaded Speedtest.net, a site that checks one’s Internet connection speed and reports it.

I expected for him to close down the video streams prior to running the speed test, but he left them running for a reason that soon became clear: even with six videos continuing to stream, the laptop was able to pull in a remarkable 19 megabits per second. That is roughly ten times faster than a basic DSL connection and significantly over even what a normal high-speed cable connection will provide.

At the beginning of this column, I asked a question. Given that Verizon is third on the list of major carriers to lay claim to launching a 4G cellular network, does the United States’s largest cellular network really have anything new to offer?

Of course, we are anxiously awaiting the arrival of a LTE device here at the OFB Labs. And, once we are able to put the network through our usual battery of tests, we will be able to provide precise, objective feedback on it. But, the demo at the Kemp Auto Museum is enough to make one thing clear: Verizon’s 4G LTE network is blazingly fast.

In OFB’s testing, the Sprint/Clearwire WiMax service does not come even close to the speeds I witnessed during the LTE preview. Neither does anything T-Mobile or AT&T offer compare. If Clear’s WiMax and T-Mobile’s HSDPA+ set the benchmark for 4G performance, then this might as well be called 5G.

Sprint and T-Mobile’s networks still have the advantage of being first with next generation speeds on phones, and Clear's unlimited plan gives it a pricing advantage, but when it comes to raw speed for wireless service on a laptop, Verizon is now in a league of its own.

Also Filed Under: Home: Technology: Now that Verizon is Going 4G, Should You Take Note?

Pingback: Twitter Trackbacks for Now that Verizon is Going 4G, Should You Take Note? - OFB.biz: Open for Business [ofb.biz] on Topsy.com

Re: Now that Verizon is Going 4G, Should You Take Note?

A few months ago, my cell carrier (Sprint) called and wanted to become my new broadband carrier, displacing my Cox Cable service. They went on about the new 4G service. Except their own map shows we are outside that service area. And not a single 4G rollout yet has actually met the official definition of 4G even within their service areas.

In fact, *none* of these services are

The ITU says so.

That said, LTE700 is likely to be a winner, given its likely much better building penetration at 700MHz instead of 2500… assuming that Verizon does not try to end-run the restrictions imposed on the license by the FCC (any device; any application) because of the Google bid on the C-block auction.

If they hold up their end of the deal — and if they build out deeply enough that they don’t have to impose the sorts of stupid data-caps we’ve seen in other wireless services — we’ll see all sorts of innovation on this service.

“None of these services are 4G; the ITU says so.”