It may be that all of us have “hot buttons” – things we sometimes hear other people say that irritate us or even enrage us. A hot button for professors of religion (or at least for me) is to hear someone juxtapose the word “Christian” and the word “Catholic.”

Students have sometimes asked me if someone we both knew was a Christian or a Catholic, as though the two descriptions were mutually exclusive. Surely, every educated person should know that Catholics constitute one variety of Christian, as Protestants constitute another variety (or rather, a very large set of varieties!), and Orthodox another variety or set of varieties, and so forth? The question “Christian or Catholic?” is what is called in philosophy a category mistake. The first category, properly understood, includes the second, and includes others as well. The first category and the second category are not mutually exclusive. Asking “Christian or Catholic?” is a bit like asking “American or Missourian?” or “Sports fan or baseball fan?” 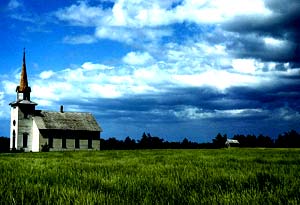 My understanding of the meaning of the word “Christian” is that it is a descriptive term, not a normative one. That is, when I use the word Christian correctly it simply refers to anyone whose religion centers on the figure of Jesus of Nazareth, as the religion of Catholics, Protestants, Orthodox and others does, whether I personally agree with all which that person believes about Jesus or not, and whether or not I approve of any other of that person's beliefs or practices.

When I call someone a Christian, I am not necessarily endorsing all that person's beliefs, but only describing them, or at least some of them. I hasten to add here that, while I am a Presbyterian (a particular kind of Christian) I find myself in general agreement with most of the essentials of what the Catholics I know believe, as well as a great deal of what other categories of non-Presbyterian Christians believe. But, should I meet a person who claims to be a Christian, and who seems to understand that this term means positive identification with Jesus, I recognize the correctness of his or her use of the term, even if I do happen to disagree with other beliefs he or she holds. As D.T. Niles, the great churchman, used to say, you can be a Christian and have a very bad theology.

This is supposed to be a Reformation Day piece. What does the above have to do with the Reformation? Well:

I think it is obvious that what people mean when they say “Christian or Catholic” is “Protestant or Catholic.” The good old word “Protestant” seems to have disappeared from the vocabulary of the contemporary Christians who style themselves evangelicals. “Protestant” used to refer to those Christians who traced their particular understanding of the Christian faith back to the Reformation of the sixteenth century, to the teachings of Martin Luther and John Calvin and those other great leaders whom history calls the Reformers.

Those Reformers, in fact, liked being called Evangelical, a word that means “pertaining to the gospel.” They had an understanding of the gospel, the Christian message, which they felt had been lost during the previous thousand years of church history and which they now wished to proclaim once again. They did proclaim it, powerfully and successfully, so much so that the essentials of the Reformers' understanding of the Christian message are none other, I think, than the essentials of what today's evangelicals (as well as very many Christians who do not usually call themselves evangelicals) hold to be true. These essentials include:

Now, to repeat, I am certain that, in this day and age, there are a great many Christians who do not call themselves Protestants or evangelicals and who do not identify themselves with the Reformation, but who might claim the beliefs above as central tenets of their own faith. At least, these items are topics of dialogue and discussion among Christian groups today. The old boundary lines and battle cries of the wars among Christians have to a large extent faded. The essentials I listed above, or thinking about them, anyway, are the common heritage of Protestants and Catholics and other kinds of Christians. Still, those of us who belong to the churches that are historically linked to the Reformation may justly claim a peculiar relationship to these essentials of the faith. They are what we bring to dialogue and discussion among Christian groups. We can signal our identification with the Reformation and its heritage by calling ourselves “Protestants.” If you don't like that term, find another.

But, here's the bottom line: it is at best ignorant and at worst unChristlike bigotry to ask, “Christian or Catholic?” It may still be useful and helpful to ask, “Protestant or Catholic?” and to reflect on the inestimable treasure that the Reformation bequeathed to us.

On Reformation Day, we glorify God for what he accomplished in 16th century Germany through His servant, Dr. Martin Luther — the recovery of the gospel of salvation by grace through faith for Christ’s sake.

That’s what separates Christians & Catholics. The real gospel verses the false Catholic gospel of salvation by works. While Catholicism holds to their false doctrines they cannot be considered Christians, only those who follow Christ based on the true gospel are Christians.

Oh my. We are saved by faith and works. This is clear scripture. The fact that Martin Luther, a catholic monk, decided to break away from the Church and even attempt to have the Book of James removed from the bible is a very sad thing. Rather than keeping ALL the tools of the Christian faith he chose to leave some behind. This of course led to others who didn’t agree with what he had to say and the breakaway’s continue even to this day. Most protestants don’t even realize that Martin Luther held great love for Mary the mother of Christ until his death. This is not to say that there weren’t problems within the church at the time. There certainly were, but, the answer was not to leave the faith that had clearly led millions to Jesus for about 1500 years. Before you bash a Catholic and say that they are not “True gospel Christians” you should give special thanks to God that thousands of Catholic monks made sure that you got a copy of the Bible in the first place. God bless you! May you study Catholicism and learn the truth of where you really come from.

The main distinction between Protestants and Catholics is, in fact, the very means by which we are saved - quite a distinction to make.

We are saved by grace, not works. Faith without works is dead faith, because real faith is evidenced by real works, repentance, and a life that conforms believers to become more and more like Christ. The root is faith, the fruit is works. If you try to plant a tree upside-down, it’ll die. Likewise, looking to works for salvation leads to death. Who has anything to add to perfect life and brutal death of Jesus? To say we do is to say that Jesus isn’t really able to save anyone on his own.

Thank you, for a very excellent article.