Drawing Windows Users to the Mac? There’s an App for That.

The concept of an “app store” in which normal, everyday people easily download applications for their devices vaulted to the public consciousness two and a half years ago with Apple’s iPhone App Store. The store shook up the way people view and use mobile phones. The Mac App Store announced on Wednesday appears poised to be just as big of a seismic shift. This is not an attempt to simply make a little revenue on Mac software sales; it is Apple’s plan to translate iPhone and iPad momentum into a full-fledged attack on Microsoft’s Windows stronghold.

A few “app stores” – the Nintendo WiiWare store comes to mind – existed before Apple’s, but the iPhone app store captured the imagination of people for two reasons. First, it made unheard of independent developers suddenly able to reach large audiences without proportionally large marketing budgets. Second, it brought to the mainstream the idea of adding apps to a platform most people did not consider getting them for: phones.

Platforms such as Symbian and Palm OS had long offered a variety of apps, but finding and installing them was not the sort of thing most “average” people did – certainly not on a regular basis! The process could be confusing, there were the usual issues of finding trusted sources and so on. Apple’s App Store solved those problems by making “installing apps” something people did for fun because it was easy and safe. 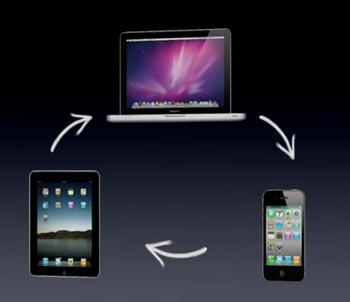 People are used to the idea of installing software on a computer: office suites, games, instant messaging clients and so on. Yet, the differences between smart phone and computer software installation are not as great as one might assume. When working as a consultant for people, I have often found that many are scared to install software. Some people just live with whatever their computer manufacturer deigned to pre-install, while others try to install programs but have encountered enough problems to be… resistant to installing too much.

In any kind of software installation situation, of course, malware looms large as a real reason for trepidation. Sure, if I go to the store and buy a package I may be safe enough, but what if I need an app right now and so I decide to Google for it? Can I really trust that perfect-for-the-task app beckoning at me?

As to updating what software people do install to keep it secure? Forget about it.

Move beyond the confident power users and it is not hard to find many people who are now in a situation where they feel safe loading up their phones with apps, but would not think about doing so without help on their computers.

By applying the basic concepts of the successful iOS App Stores people are already familiar with, Apple wipes away every one of these reasons why people dread the idea of getting applications for a computer.

This is new ground for the desktop computer world. Sure, Linux users have long enjoyed central repositories for installing and updating software, but these channels have never been entirely satisfying. Typically, they offer an odd mix of old style distribution channels (a slow inclusion process that is difficult to participate in as an unknown developer) and a non-curated free-for-all (many programs can be extremely buggy).

Despite its numerous downsides, Apple’s app review process has managed to strike an impressive balance: anybody can participate, but junk apps are minimized. This curated-open approach is what will turn the Mac App Store into a so-called “killer app” able to draw new users to the Mac.

Conventional wisdom says that software selection has been a Mac weakness, with big name developers still offering more choices on Windows. Apple was able to overcome that hurdle on iOS, rapidly passing up other platforms' app ecosystems in both size and desirability, by making independent, no-name developers’ offerings exciting and accessible.

The Mac has long had a very good community of independent developers who produce applications with far more professional designs than many larger developers on other platforms. This is a testament both to that developer community and Apple’s work to provide development tools – the same ones used for iOS – capable of building high quality, consistent interfaces with comparatively minimal effort.

Placed in the context of a safe, easy – fun, even – “shopping experience,” this quality arsenal of affordable applications could be a major selling point for the Mac, as it has been for the iPhone and iPad. People see friends using amazing iOS apps and find themselves needing an iPhone or iPad.

If the Mac App Store accomplishes the same on the desktop, and it will, people will need a Mac to go with their iPhone.

Also Filed Under: Home: Technology: Drawing Windows Users to the Mac? There’s an App for That.

Pingback: Twitter Trackbacks for Drawing Windows Users to the Mac? Thereâ€™s an App for That. - OFB.biz: Open for Business [ofb.biz] on Topsy.com