The View from Mudsock Heights: They Might Be Slithery and Scaly and Cold, but They Really are Our Friends

It would be a lot easier to get things done around here if there were more snakes. No, I’m not kidding.

I spent an afternoon a couple weeks ago disassembling the lawnmower — not the Gravely, the practical one — which was not something I had planned. The little mower started right up, but I hadn’t made it clear around the yard even once before it began smoking in places lawnmowers do not smoke. I couldn’t figure it out at first — I’d put it away carefully and it seemed to be running without problem.
Then it hit me. Of course!

Over the next several hours I removed parts of the mower and parts of the enormous, now scorched, mouse nest that had been constructed throughout the mower over the winter.

I realized that this was probably the source of the smoke because two weeks earlier the garage door opener in the shop, which I hadn’t used for a few months, acted very strangely. It opened part way and closed part way, back and forth, quickly, a little bit like the television commercial in which the fellow flips the switch in his house on and off while the garage door two houses down pounds the hood of the neighbor’s car into oblivion. I couldn’t imagine why this was happening, so I unplugged the opener, climbed up on the stepladder, and had a look. The entire housing was packed tight with a huge mouse nest. The aroma was not something I’ll soon forget. It took hours to remove most the garage door opener and all of the mouse nest.

It is too painful to think of, let alone tell about, the mice that got into my motorcycle.

We’d have fewer mice if we had more predators. In practical terms, this means more snakes. But snakes are often misunderstood and disliked around here, which is a pity. They are also the subject of some myths that are as remarkable as they are erroneous. 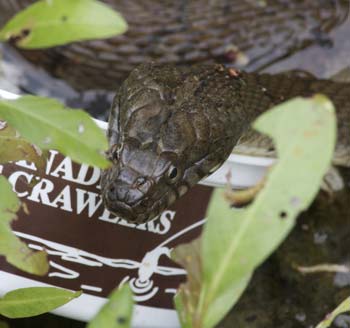 I’ve also heard tell that Ohio is crawling with water moccasins, the deadly cottonmouth. There are lots of water snakes in Ohio, almost all of which look a little like water moccasins, but all are harmless. We have some copperheads and a few timber rattlesnakes (which are protected), and the small massasauga rattler, but no water moccasins. One does not commonly see the poisonous snakes, either, though a lot of harmless snakes vibrate their tails when alarmed, which in dry leaves can make you think it’s a rattlesnake.

Old prejudices are hard to overcome. Many otherwise entirely reasonable people think that snakes — all snakes — should be killed on sight. The fact is, the snakes found around here — even the poisonous ones — are beneficial. Many of them eat small rodents — rats and mice — and others eat insects. While it would be a problem if, say, a rattlesnake somehow crawled into your house or barn, the chances are that it is as interested in skedaddling away from there as you are in having it do so. I’ve tried to find statistics on poisonous snakebites in Ohio but have failed. This is because such bites are very rare. They would be even more rare if people seeing snakes would simply leave them alone.
Yes, it can be startling to turn over a log or a rock and find a snake there. But a lot of things startle us without our feeling the need to kill them. I know of one old farmer who is delighted to see a big blacksnake in his barn. It’s there because there are mice, and the more mice it eats, the fewer mice will be getting into the grain. That is a sensible approach.

When I see a snake, I think of hundreds of mice that won’t be in my lawnmower, or my garage door opener, or, dammit, my motorcycle.

Also Filed Under: Home: Culture: The View from Mudsock Heights: They Might Be Slithery and Scaly and Cold, but They Really are Our Friends
Please enter your comment entry below. Press 'Preview' to see how it will look.