The View from Mudsock Heights: Let There Be Dark -- As Long As There Are Horses

Winston Churchill famously said, “there is something about the outside of a horse that’s good for the inside of a man.” He was right.

I think of that this time each year, when standard time returns, darkness comes much too early, and melancholy looms. My friend, the psychiatrist Jill McCarley, gave me a book last year about “seasonal affective disorder,” but I’ve come to think it’s probably not a disorder at all but a natural phenomenon developed to help us adapt to the coming of winter, a time when many mammals slow down. It is more pronounced in some of us than it is in others, and certainly the effects on some people are very serious indeed.

Back to horses. In Connecticut, 500 miles farther east and a little farther north, darkness comes more than half an hour earlier than it does here. The switch to standard time used to be, for me, an invitation to lethargy. Except for the horse.

Her name was Allie, and she was a big, old, thoroughbred mare, and crazy — but I repeat myself. Thoroughbreds tend to be a little nutsy, in an entirely loveable way, and mares do, too. Allie was exemplary, twice.

She needed feeding and her stall needed mucking out twice a day, and with the time change her second feeding came after dark. I would dread it — until I got out to the barn. Here she’d come, across the big paddock at a trot, eager for food and excitement, all snorts and nickers and cheerfulness. (Allie was an agreeable animal, eager to please. She seemed to notice that I mucked out and took away with me such deposits as she made in the barn. To her pea-sized brain, this apparently meant that I valued her contributions, and in due course she would poop only in her stall.)

The funny thing was that after a few minutes in the barn with the horse, any lethargy or bad mood disappeared. No matter how cold it was, I would look for other tasks that would prolong my time there with Allie. There is something about … a horse.

So it was that in anticipation of the time change and coming darkness, last week I picked up a few pounds of carrots and stopped by the Last Chance Corral. If you do not know about LCC you should, for it does good work. Victoria Goss, who is in charge, came here from New England, most recently Rhode Island, where she trained and showed horses. For 20 years she has been here, looking after horses that need rescuing: injured ones, starved ones, mistreated ones, and now LCC takes in more than 150 orphan foals each year. 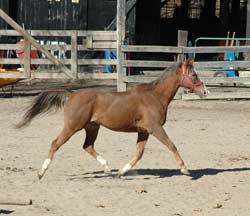 These are typically the foals of nurse mares, who are impregnated solely so that they will produce milk. (They are then used to nurse important and expensive foals, and their own offspring are typically killed.) Victoria and her second-in-command, Don Chalmers, and their enthusiastic crew of employees and volunteers, take in these woebegone animals and nurse them back to health, then put them up for sale or adoption.

LCC is constantly in need of donations. It is, in my estimation, a most worthy cause. LCC has the biggest equine neonatal operation in the country, and they operate it on the nickels and dimes people give them. They do a lot with very little, and not just with foals.

“It’s not a lifestyle,” Victoria laughs, “it’s a life sentence.” She has a collection of before-and-after pictures showing horses that were at death’s door due to starvation, sickness, or injury, brought back to healthy and useful life. There are lots of happy endings at Last Chance Corral.

And for me, a happy beginning. It was a delight to be around horses again. As is always the case, right off the bat I had a favorite, a black with a white blaze who I believe Don said had been a police horse before it foundered, and who was most appreciative of the carrots I offered. (In a big stall in a barn at the bottom of the property on Pomeroy Road was Orlando, a Belgian warmblood of better than 17 hands — a very big horse. He, too, liked carrots, but left the impression that he’d take the carrot and everything else up to the elbow, and would spit out the non-carrot stuff later.) There was the little bedraggled work in progress, the rare pony who has survived a broken leg — twice. Its mane and tail had been cut back because they were full of burrs.

I’ll be back there, and not just to stuff carrots into the horses’ faces; can’t wait to see how that little pony looks when its hair grows back. And there’s work to be done. Maybe they’ll let me grab a muck fork and recreate my days with Allie. There’s little work more satisfying than that which involves horses.

Come spring, my next project will be to fence off a couple acres I have here, and fashion an acceptable barn, and maybe adopt a couple of hard cases from Victoria.

Not to ride, simply because horses are such good company. Especially at the time of year when night comes early.

Also Filed Under: Home: Culture: The View from Mudsock Heights: Let There Be Dark -- As Long As There Are Horses
Please enter your comment entry below. Press 'Preview' to see how it will look.