Every year, Americans gather around their dining rooms to have holiday dinner. Unlike other special days of the year, however, this holiday is a holiday of intolerance and division. Surely you know the day I refer to, don’t you? Thanksgiving!

There are several major problems with a holiday like this one, all of which serve to make it a very intolerant day. First, it purposely excludes those who aren't thankful. It is enough to make the complainers in society develop a persecution complex. Is it fair that we can exclude the sincerely ungrateful from this day? I should say not.

It gets worse when you consider the clear lobbyist influence in the holiday. Thanksgiving isn't named “Turkey Day” just for grins. Clearly, there was a payoff from those peculiar poultry producers that forced the heaping of even more intolerance onto that late November day.

Think of the poor hog and cattle farmers; they are willfully and unfairly excluded from this “holiday.” Who ever heard of carving the Thanksgiving Roast Beef? I assure you that anyone trying to promote such as concept would not be successful.

If this brief overview of prejudice has not demonstrated the problems surrounding Thanksgiving, I cannot image what would. However, before you lose hope, let me say that I have a suggestion on how to repair this truly horrible mess. This is my official proposal to rename the fourth Thursday of November the “National Day of Thankful or Unthankfulness” with the new nickname of “Any Meat or Poultry Product Day.”

Sadly, Thanksgiving is not the only politically incorrect day of the year. Clearly we have a problem with Independence Day too. This day is loaded to the brim with exclusionist practices. It starts off with the nickname “Forth of July,” which completely ignores those folks who prefer to celebrate on a different day, say July third or maybe January thirtieth. 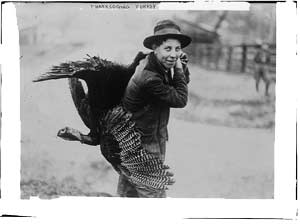 It gets worse too. This is a day that blatantly ignores the fact that other countries did not obtain independence on July fourth - perhaps they never have at all. How is a Tibetan citizen going to feel if they were here on Independence Day? I think they would feel excluded.

Furthermore, how can we forget the British? I can hardly imagine that they can think anything other than depressing thoughts on the day we celebrate our act of aggression against them. I doubt the Canadians feel much better either, after all, our Revolution could be interpreted as us saying we didn't like being part of the same empire as them - a thought that surely causes every Canadian on the border to dread the sounds and festivities they hear from their southern neighbor. The only way we can resolve these problems is to rearrange the entire day.

To wrest away this cold hand of intolerance, I propose that before the celebratory fireworks, the nation have an hour of mourning. The first part will be so that those in occupied countries can join with us, then the second part of the hour can be for mourning the British defeat in the Revolutionary War. Also, rather than flying an American flag, each house will be assigned a flag from another country that has declared independence at some point. We surely do not want to infer our independence is any better than anyone else's, and this new flag protocol will insure this never happens.

Finally, to insure that no families with pyrophobia are forced into their houses out of fear, fireworks should be prohibited. One fireworks display can be filmed from the middle of the ocean, allowing people to watch them on TV. This will allow them to enjoy the display of fireworks without offending anyone. To insure that people who don't like certain colors aren't bothered when watching the display, only the natural color of the sparks will be allowed.

With plans like these I have presented, I hope you can see how much better things can be. I trust that by implementing them everyone will soon enjoy improved holidays. Although, we must be careful not to exclude those who dislike holidays, so my plan may require a bit more improvement. After all, we wouldn't want to exclude anyone.

Also Filed Under: Home: Culture: Problematic Holidays
Please enter your comment entry below. Press 'Preview' to see how it will look.