The View from Mudsock Heights: Woodsmoke

This week, OFB is pleased to welcome Dennis E. Powell as a regular contributor with his column, “the View from Mudsock Heights.” Everything must start somewhere. For Dennis, it starts with a woodstove.

If I stop doing writing work and get up and do some real work, the woodstove will be ready before I need it.

It is a beautiful old Buck stove, made of steel that’s forged, not cast, with brass fittings and thick fireglass doors. The fan that blows the hot air from around the sides, top, and bottom into the room works just fine despite its being close to 50 years old. All it needs is a good cleaning — it sat in a barn unused for a few years before I bought it last fall for $75 — and a coat of nice, flat black stove paint. Probably a couple of good, hot fires in it before I bring it inside for installation; that paint smells none too good as it cures.

It didn’t go in last year because I had neither hearth nor chimney. I can build the hearth, no problem. I’ve already started accumulating brick for that. This part of the country has a long shared past with the brick business, and I’m hoping to make the hearth entirely of local, used brick, not so much for authenticity as to have that connection with the people who lived around here before I did.

Then Dave Barrett will come and run a very long, very specialized, and very expensive pipe from the stove, in my bottom-level office, up through the corner of the spare bedroom, then through the attic and the roof. Dave’s from Logan, but my friend John said he’s the best, and that was good enough for me. Turns out, Dave is also a skydiver, which I was until my last jump contained the kind of very clear warning that one must heed — the parachute opened early; if it had opened a second earlier it would have ripped apart the airplane and killed everyone, as happens a few times each year. I took it as a sign. But it’s good to have a stove guy who jumps out of airplanes. The fact that he’s alive indicates competence.

Anyway, in my office it should be able to heat the whole house and give me the boost to mental health that comes from having a fire nearby as I work. Of course, there is another crucial element: wood. Or, precisely, that damned locust tree.

It stood dead at the edge of what is now my property for 10 years or more, I’m told. The bark had all fallen away, so it was like a tall, bleached bone pointing skyward until the windstorm last spring that rendered it horizontal. No problem, I thought. 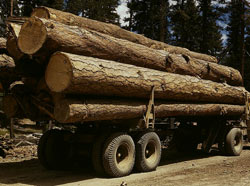 Not quite Powell's locust tree.
SOURCE: Library of Congress

What is it with locust? I’ve dealt with hard woods, but nothing that matches this thing. I marched on down, chainsaw in one hand and Peavey log jack in the other — I’m an old hand at this, or thought I was — and started lopping off the big branches so as to make manhandling the trunk with the Peavey possible. Must be something wrong with the saw, I thought. I could swear I sharpened it before I put it away last year. But no, nothing was wrong with the saw. The wood had the approximate density and hardness of concrete. I did finally get much of it disassembled, split, and stacked, though the main trunk remains. It is impossible to cut a whole slab from it without the bar of the chainsaw becoming so hot that it warps, sending the cut off in strange directions, binding the chain, and turning the air blue with smoke and profanity. Leonard and June, the first people I knew here and among the best people I know, stopped by while I was fixing to give it another try the other day; Leonard remarked that I seemed to have taken good care of my chainsaw. He had no idea how I had abused it in the destruction of the locust.

They say that firewood warms you twice, the first time, when you cut it. I do not hold with this. I think that the energy released when firewood burns is exactly the amount exerted in cutting, splitting, and stacking it. If so, the locust wood will burn very, very hot. (There’s a great song about firewood, “More Wood,” on the Voices of Winter album by Herdman, Hills & Mangsen, which is well worth hearing.)

My plan now is to split the trunk — think an old, out-of-shape Abe Lincoln in the famous rail-splitting scene — because it splits pretty well, then saw chunks off the resulting narrower pieces.

It will get done, because woodsmoke is important. You know that if you’ve ever eaten bacon or treated a big piece of pork or a turkey breast to just-barely-hot hickory or maple smoke for most of a day and tasted the results. It is important because other fuel is expensive, and there are a lot of trees around here; my 10-acre woodlot, properly managed, ought to keep this place in fuel forever.

It is most important, though, because of that first crisp evening, the first evening when long about suppertime you notice it’s already getting dark, the first evening that you step outside and smell, as faint as a distant echo, that first little wisp of woodsmoke from the first fire of the season. Maybe the prettiest sensation in the world, the only possible improvement being to share it with someone you love.

Leastways, that’s how it is out here in the woods.

This article romanticized the aroma wood smoke and wood burning but it neglects to mention that wood smoke contains severe toxicants that are hazardous to human health and the environment.

Wood smoke is chemically almost identical to tobacco smoke, and it also emits formaldehyde, benzene, toluene and dioxins, some of the most insidious chemicals known to man.

The American Lung Association, the EPA and US Center for Disease Control all state on their websites that wood smoke is a common trigger for asthma attacks. the smoke from just one fire may be enough to send a small child with asthma to the emergency room. Because asthma is so common and skyrocking out of control, we forget that it si life threatening. Wood smoke is even implicated in sudden infant death syndrome.

It is time we take a serious look at what happens to people’s lungs when ingesting wood smoke. It is also a property rights violation if wood smoke from my yard invades someone else’s property who wants to enjoy their property smoke-free.

Maybe “out there in the woods” it only injures wildlife. But it also infiltrates ground water and our general water supply.

I am in total agreement with Julie Mellum regarding wood smoke. Fireplaces are ineffective in heating a home, and only a few hours of wood burning in a single home can drastically raise fine particle concentrations in dozens of surrounding homes throughout the neighbourhood. None of us are protected from this toxic smoke. Burning wood and allowing it to foul the air of your neighbours is a rude and unnecessary assault on the senses of your neighbours. It causes many people, especially the young, the elderly and those with respiratory problems to be put in great physical danger.
Burning wood is a costly and filthy affront to all that are invaded by it. Exposure to the smoke is extremely uncomfortable and causes burning eyes, dry and sore throat, irritation of the nasal passages, cardiovascular system damage, causes some types of cancer and brain damage, headaches, and allergic reactions, among other symptoms. When smoke is prevalent in the area, people cannot open their windows for fresh air, because there is none. They cannot enjoy their own property due to the stench. Everyone should be able to relax in their own homes without the fear that they are being contaminated by toxic smoke. It is an environmental right of all people.

Welcome to OFB, DEP, and thanks for a great warm-up piece (all puns intended). What the watermelon harpies above didn’t notice was they aren’t affected by your choices, so they have no say in the matter. As the economy continues grinding to a halt, even utility companies can fail. Those of us out away from the urban madness may be the few who stay warm. I’ll let you keep your locust; I prefer my local blackjack oaks. They can be cut with my double-bit ax.

There have been a lot of new studies which have found wood smoke to be considerably worse than tobacco second hand smoke. Wood smoke consists of microscopic particles which look like the sharp, jagged wood chips used for landscaping. Such airborne particles can wreak havoc in the lungs - once inhaled, they stay put in the lung for as long as forty times longer than tobacco particles do. It is as if we are inhaling pins and needles when we take a breath of wood smoke! Learn more about this and other pertinent facts about wood smoke here:

Every time I hear that “Oh but it’s FOR THE CHILDREN!” I know someone is putting it to me while telling me it’s for my own good. Ya know what? Screw the children! Better yet, put ‘em out in real country and make them learn how to run a polluting chainsaw AND a woodstove. Sure, we’ll lose a few — the herd gets thinned — but chances are those who make it won’t be whiny neurotic scolds.