Acting Well: Reflections on the Life of Katharine Hepburn

Even to the present day, I remain woefully ignorant of the catalog of an American acting legend – Katharine Hepburn. Despite that, based upon two films, 1967's Guess Who's Coming to Dinner? and 1981's On Golden Pond, I had decided that she was the best actress I've seen.

Today's actress is so chained to her sex appeal that she is not allowed to act. In the past, it was at least possible that a female character could be intriguing in some other way, and then in due course, or perhaps because she creates interest, be considered sexy. I don't believe it's overstatement or moralism to say that sex appeal is now the only criterion.

Make no mistake: Miss Hepburn was a striking woman at every stage of her adult life. But it's no accident that she's more known for acting. When I saw the actors and actresses she'd acted with in these notable films, I got a palpable feeling of disappointment; no current actor or actress is larger-than-life, it seems, as Hepburn, Spencer Tracy, or Sidney Poitier were. Please forgive me if I sound simply nostalgic for bygone days; my hunger is deeper than that, as I hope I can explain. I don't mean famous – there are ample numbers of those – I mean rather that the person so grabs you with his or her character that you forget the actor's name. The actor is the character, and there's no going back. If one is so great that he's at risk for typecasting, he's done a great thing.

Anyway, I was up late some weeks ago watching Turner Classic Movies, when I noted a two-hour block simply titled, “Katharine Hepburn,” and I was intrigued. It was preceded by a bio reel in an old style that recapped Hepburn's career – distinguished to say the least: 12 Academy Award nominations, 4 wins for Best Actress, and numerous other awards – followed by an interview from 1973 she gave on the Dick Cavett Show. I'd venture to say this interview would capture and hold your attention surely as any blockbuster feature of today. 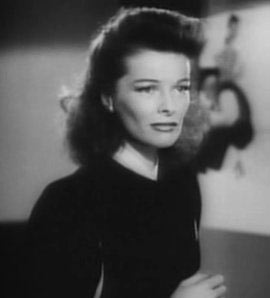 Their discussion ranged from method acting and famous costars to the films themselves. Hepburn laid out a philosophy of acting and strongly affirmed the privilege of acting in a manner so humble as to belie her well-deserved fame. She said Spencer Tracy was the one from whom she'd learned the most, and that he'd carried her through their nine movies together. According to Internet Movie Database, Hepburn won the 4 Best Actress Oscars for Morning Glory (1933), Guess Who's Coming to Dinner? (1967), the Lion in Winter (1968) and On Golden Pond (1981). Considering her 21 nominations, there is little reason for such modesty.

In any case, I plan to watch the 2 Oscar-winning performances I have not seen, then progress through as many other films as I can. But hers is a stage and screen career that lasted over sixty years; I doubt I will finish. Hepburn was kind enough to enlighten me as to the reason for the dearth of great actors even by the time of the said interview: sexual self-absorption. Her life could hardly be called morally strict or sexually inhibited, but she believed that even in 1973 we had begun to turn inward so much that people lacked the skills to either act or live the “great hero and heroine stories” of her earlier decades.

Moreover, though firmly committed to the idea that American actors were superior to British ones (and presumably everyone else) she lamented our loss of skill in speaking English. What this seemingly points to is a lack of identity. We are living through a time of fragmentation and coarsening; it will be hard to tell if our storytelling (and, ultimately, the nation) can be recovered. Odd that an avowed atheist should identify such a deep spiritual need by way of film.

I can't think of a contemporary actor who could be interesting to interview for two hours, and the tragedy of that is only matched by the majesty of Hepburn’s interesting life and career.

Jason Kettinger is a contributing editor to Open for Business.

Re: Acting Well: Reflections on the Life of Katharine Hepburn

Unfortunately the day of great actors and actresses is over. I’ve been watching classic film since a very young child and today’s actors do not compare. And I have to agree wholeheartedly with Hepburn as to why acting is a lost art, and how it was lost. We live in a world where youth, beauty, and sex appeal trump acting ability. Just take a look at what Hollywood calls stars today.

And like you, I can’t think of watching a two hour interview with a contemporary actor. They are so narcissistic that the interview would be simply about themselves and nothing else. I rather get a root canal!

Thank God for Turner Classic Movies, and DVD’s, these take us back to a day when acting was an art and that art was “larger-than-life,” and kept the theaters full. Perhaps it was that way because old Hollywood demanded it, and actors and actresses wanted more than anything to act. It’s a bygone era and I don’t think it can ever be “recovered.”

Re: Acting Well: Reflections on the Life of Katharine Hepburn

It is both interesting and promising that you react so well to Hepburn’s performances in Guess Who’s Coming to Dinner and On Golden Pond, as many Hepburn admirers (myself included) feel that these are amongst her lesser works.

May I suggest the following films, if you’re looking to investigate her career further and understand what made her so special: Morning Glory, Little Women, Alice Adams, Sylvia Scarlett, Stage Door, Bringing Up Baby, Holiday, The Philadelphia Story, Woman of the Year, Adam’s Rib, Summertime, Suddenly Last Summer, Long Day’s Journey Into Night, The Lion in Winter and A Delicate Balance.

I realize that this list is still fairly lengthy and intimidating. The most essential films here are Sylvia Scarlett (which cuts to the essence of the rebellious persona of the 1930s which posed such a problem for movie audiences of the era), The Philadelphia Story (which rectifies those problems with the most sophisticated romantic comedy ever made), Bringing Up Baby (her best comedy and one of her best performances), Long Day’s Journey Into Night (her best dramatic performance) and The Lion in Winter (the only Oscar-winning performance that she deserved to win for, although she deserved to win for many others that weren’t winners).

I hope this helps in your quest. Katharine Hepburn was a one of a kind star, a unique screen presence and one of the most fascinating personalities of the 20th century. Above everything she was a tremendous actress, possibly the greatest screen actress there ever was. I am sure that you will enjoy your discovery of her wonderful work.