By Leonard Durrenberger | Posted at 4:17 AM

When it comes to enthusiast and professional digital photography, everyone knows and talks about Canon and Nikon. Sony has recently become extremely aggressive and Pentax occasionally rouses some interest, but all of them have taken relatively similar design paths. That leaves Olympus as the innovator in many important ways that make them worth another look.

All of these features are enhanced by the fact that their pro-level lenses are very weather and dust resistant. User testimonies report that Olympus once had some factory difficulties resulting in a bad batch of a certain model of lens; but then, even before the complaints began to accumulate, they recalled all of them, paying shipping both ways. That is all too rare and worth applauding.

Olympus's track record is one of innovation. First they developed the Four Thirds format in collaboration with Kodak, Leica, and Panasonic. It was a courageous move, because at the time, the technology was more “promising” than “arrived.” While initially those with the APS-C format – Canon, Nikon and the rest – fared better, now technology is vindicating Olympus’s choice since the image quality of the smaller sensors has improved. The pay off is the selection of outstanding, compact lenses Olympus can provide.

She and Panasonic (and probably Leica) are now co-developing a smaller SLR with the same Four Thirds sensor. I have seen where various avid users, many of them professional photographers, have “voted” that it will soon come to be the darling of professionals who lug around weighty systems. 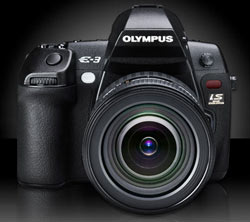 I think I can safely say that Olympus devotes proportionately more of its resources than do the salient brands, to research and development of new technologies than to advertising. Sadly its name is not exactly a household word. I wish that were otherwise. And I have witnessed aficionados of “pet” brands dissuading seekers from even considering any other; I myself underwent this from a number of parties when they learned I was considering going with Olympus. Not that their pet brands have inferior products, they don’t. But I selected Olympus for its preferable characteristics.

I have owned SLRs from both of the two most popular brands, and used those of others of the competition. But I mentioned earlier that Olympus has excellent quality plus features and favorable price. Do your own research; you will see. I have been keeping track of the many main brands plus some of the others, and discussing their characteristics and their advantages and disadvantages.

Having done the research and pored over the technology, I feel justified in telling folks just how good Olympus is, and advising them to select Olympus as their SLR system.

Well writen and accurate article, but you left out any mention of the 12-60mm f/2.8 SWD lens, which I believe is the main reason to buy an Olympus camera. Neither Nikon, Canon, or Sony has an equivenent lens. For me and many other this lens covers 95% of my shooting, and it is consistently rated higher than competitors lenses, with less range or speed.

Don’t forget the 50-200/2.8-3.5 lens either. It is still unmatched by other manufacturers in terms of equivalent focal length range, speed, and compactness.

Let us not forget the cost difference as well. Olympus is a top performer at a lower overall cost than any of the competition. Plus there’s a huge selection of glass and options available for the system. Olympus was also the first to incorporate the dust reduction system into all of their DSLR’s. Olympus DSLR’s are 100% Digital, from the ground up. They are not “converted” to Digital from film, and it shows. I have used cameras from most of the competition and when it’s said and done, Olympus wins - hands down. I have never been this completely happy with a camera brand.