Long lines, crowded planes. Fasten your seat belts, the summer travel season has begun. To help keep the skies as friendly as possible, we asked travel writers Sandra Gustafson and Pat O'Connor to offer some ethics advice for would-be passengers. We provided the scenarios; they offered the tips on proper conduct.

First things first: Gustafson suggests starting all trips with a positive attitude. “I'm going to do something I really want to do,” says Gustafson, author of the popular “Great Sleeps/Great Eats” guidebook series. “I'm not flying to the dentist going for a root canal.”

O'Connor, an author and a guide who works with Public Television travel guru Rick Steves, suggests this approach: “I always look at an airline cabin as being a shared cooperative adventure.”

UP, UP AND AWAY

1. On a long overseas flight, the person in front of you reclines the seat so that it's practically in your lap. Speak up or forever hold your peace?

Gustafson and O'Connor agree that putting your seat back is one of the amenities you paid for when you purchased your ticket.

“Anybody who doesn't expect for these things to be used are kind of being unrealistic,” O'Connor says. Still, Gustafson says, there's nothing wrong with politely asking the person to please move it up a little. Other than that, she adds, “you just might be stuck.”

2. The passenger in the aisle seat is sleeping soundly, blocking your exit, and you have to use the restroom. How do you handle that?

Talk about it when the flight begins.

“I give people in the row permission to wake me up,” says O'Connor, who likes sitting in the aisle seat.

Gustafson, who prefers a window seat, says she'll warn her seatmates that she takes frequent bathroom breaks. “I tell them, 'If you feel someone crawling over you, don't be alarmed. It's just me.'” 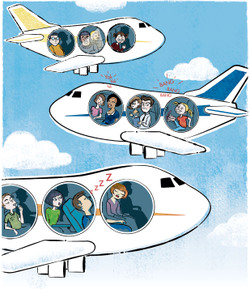 If he happens to be on an inside seat, O'Connor doesn't mind tapping the person lightly on the shoulder. If they bark about it, he advises erring on the side of compassion. “It changes your context if you see somebody who is angry as somebody who is really just fearful,” he adds. “I say, 'I'm really sorry you're upset, but I hope you'll understand.'”

On the other hand, “You can't really kowtow to hair-trigger people,” O'Connor says. “You have to keep your boundaries.”

3. A passenger asks if you would please switch with her husband so she can sit next to him. But that would require moving from your window seat in a two-seat row to a middle seat in a five-seat center row. You booked your seat months ago, and they got last-minute reservations. What's your answer?

Neither would move, though they offered the same remedy: suggest to the woman that she switch seats with one of the people next to her husband. That way, she gets to sit with him and the person who agrees to switch gets the reward of an aisle seat.

What if the lady gets snarky about it? “They can get all the snarky they want, but that's my seat, and I paid for it, and I booked it months in advance,” Gustafson says.

4. A young child is out of control, jumping up and down, banging on the tray, and doing other annoying things. His parents ignore him. He's getting on your nerves. What do you do?

Gustafson has a three-plan attack. First, try talking to the parents (she says you might even offer to help by playing a game with the child or reading to him). If that doesn't work, talk to a flight attendant (you might ask for another seat, if there is one). The final straw would be to talk to the child directly.

She did this once when a child wouldn't stop kicking the back of her seat. She made him a deal: He starts behaving like the other passengers and stops kicking her seat, or they could trade places and she could kick his seat. “The little kid looked at me and said, 'I guess I'll stay here.' And I said, 'Good.'”

If you do talk with the flight attendant, O'Connor suggests doing it discreetly out of the earshot of the parents. “I honestly don't have an ironclad solution,” he says, sighing.

5. Your neighbor wants to talk - and talk and talk. It's going to be a long flight, and you want to just be left alone. Is silence golden?

Putting on headphones and starting to read a book are good nonverbal cues for privacy. If these don't work, be honest.

O'Connor: “I'll say, 'Listen, I'm going to a meeting or I didn't get a lot of sleep last night. I really need to concentrate on my reading or get some sleep.'”

Gustafson: “If the neighbor is persistent I'll say, 'You know, I've just had the worst day. … Maybe when we have our food service we can have a chat. … It worked out just fine.”

6. You are reading a book in an otherwise darkened cabin. The person next to you asks you to turn off your overhead light because, she says, it's bothering her and she's trying to sleep. Now what?

“For anyone to expect it won't be used is, I think, unrealistic,” O'Connor says. Yet he coaches a cooperative spirit. Reach up and try to adjust the light or offer to ask the flight attendant for an eye mask for the other passenger.

Gustafson actually travels with an extra eye mask (unused and still in its plastic wrap). “It's worked beautifully.”

7. The flight is late and your connection is too close for comfort. You're blocked by a line of passengers who don't seem to be heeding a flight attendant's call to stay seated if they don't have to run to another plane. What are you going to do?

Again, both travel experts offered similar suggestions: Before the plane is due to land, summon a flight attendant, explain the situation and ask to move to the front for the remainder of the flight. (If the plane is full, the attendant could ask someone who doesn't have a connecting flight to switch with you.)

“If that doesn't work, then you're just stuck and you've got to accept it,” O'Connor says.

But Gustafson stresses that since being late is not your fault, the airline company needs to take responsibility. Her advice: Ask the airline what you're supposed to do. “Put the onus on them,” she says.