Open for Business Endorses Somebody, Nobody for President

Perhaps Sen. John Edwards is right to claim there are two Americas – or maybe four or six would serve as a fairer assessment. As the final reckoning for many presidential hopefuls approaches – surely most of the contenders will be eliminated in the aftermath of Super Tuesday, early next month – we found no single candidate we could come to a consensus on to endorse. Some clearly are more aligned with the interests of the people and the nation than others, however, and it is these that we will highlight.

Many analysts have cited that the Republican alliance of social, fiscal and security conservatives that was built in the Reagan years is crumbling, and the disjointed appearance of the present candidates would seem to argue in favor of such an assessment. The Democratic Party faces a similar pulling apart, though not nearly as obvious in its front runner contenders for the nomination, but all the same apparent in mavericks such as Sen. Joseph Lieberman who loom large among Democratic voters despite failing to toe the party line. Perhaps too many years of homogenization caused by the incessant pull to centrist policies on both sides is finally coming to the fore.

In any case, two candidates arose from the array of hopefuls in the eyes of the Open for Business editorial staff: Gov. Mike Huckabee (R-AR) and Sen. John McCain (R-AZ). Many policies are held in common by these two gentlemen and for those we can wholeheartedly endorse either. Both Huckabee and McCain have pro-life records that are relatively consistent and do not appear to have been conjured up by dreams of the presidency, contra Gov. Mitt Romney (R-MA), nor missing entirely, as with Rudy Giuliani (R-NY). Nevertheless, McCain’s endorsement of embryonic stem cell research, which involves the destruction of embryos and the use of therapeutic cloning, is a cause for concern that tarnishes his otherwise strong, consistent record.

A key point of disagreement between editors, and, we expect, the general populous come November 4, is the proper means of handling the illegal immigration problem. While we support English being established as the official language of the United States and English fluency being required of immigrants seeking citizenship, we disagree on what to do about existing illegals. OFB’s Timothy R. Butler favors Huckabee’s approach of expedited legal immigration, which places legal immigration applicants before those presently here illegally, a policy he feels is fairest to those who have obeyed the country’s laws. Conversely, OFB’s international contributing editor Eduardo Sanchez feels the most sensible solution is a policy of amnesty for those who learn English, pass sophisticated background checks and pay a monetary penalty for illegally entering the country. This leads him to prefer McCain’s position on immigration issues. Sanchez, for his part, asserts that he feels the success of any candidate’s immigration policy depends on the U.S. confronting Mexico and the Central American states that directly encourage illegal emigration to the U.S. as a convenient solution for their own social ills. 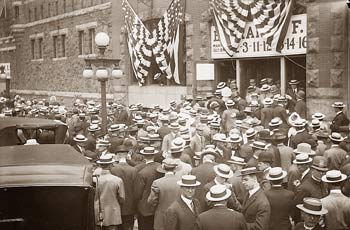 Both candidates support continued military action in Iraq, which we feel is justified by the so-called “Pottery Barn rule” that holds the United States responsible for “breaking” Iraq and therefore required to do what it can to repair the Middle Eastern state. Regarding Iraq’s controversial neighbor, Iran, we are wary of candidates that favor hawkish policies, a point which favors Gov. Huckabee and his recent support for exploring diplomatic relations with that nation. However, Sanchez favors McCain again on this point, noting that the senator, a veteran and one-time prisoner of war, is better equipped to handle military and diplomacy issues than the other candidates who lack such experience.

Huckabee, for his part, should be lauded for a bold, yet realistic attempt to reform the U.S. tax system by way of the “FairTax,” a policy Open for Business supports. We also support the governor’s rejection of the recent economic stimulus “credit,” which will essentially lead the government to pay people for being citizens – a policy smacking of socialism – and will likely lead to worsening the trade deficit with China more than anything constructive. Huckabee’s preference for using the funds allocated to economic stimulus to improve American infrastructure, a plan that would fix failing roads and avoid further devaluation of the dollar, seems preferable in that at least the money would actually go towards stimulating the domestic economy. For McCain’s part, the senator deserves credit for clear support of free trade, a helpful position for free enterprise, which we support so long as free trade is limited with regards to countries violating human rights, subsidizing products to allow for unfair export prices or otherwise artificially damaging the free market.

Of concern with regards to both candidates is their support of various “national security” policies, such as the USA PATRIOT Act, that continue to threaten the liberty of these United States. However, amongst major party candidates, only Rep. Ron Paul (R-TX) opposes the act. While an interesting candidate in many ways, the congressman’s newsletter scandal, which suggests possible racist and anti-Semitic leanings on his part at worst and reckless detachment from projects associated with him at best, coupled with some of his more extreme libertarian positions seem to prohibit an endorsement.

Admittedly, both McCain and Huckabee have liberal undertones that cause us some trepidation, however by and large we believe them to be the best of the current crop of hopefuls, a point that is enhanced by their straight talking, independent convictions that offer hope of improvement in the current conditions of Washington. Moreover, these attributes offer promise that both will have a better chance of drawing the independents and conservative Democrats that will help decide the election. Either candidate will prove a worthy contender come November – one that we can feel comfortable endorsing over Sen. Hillary Clinton (D-NY), Sen. Barack Obama (D-IL) or Sen. John Edwards (D-NC).

In every crowd, of course, there is always a contrarian, and our staff does not escape that. Ed Hurst would vote only to dismantle the entire federal structure as the only hope for saving the citizens of this great land. Given the apparent lack of any candidate to support anything resembling this, Ed watches from the sidelines sniping at everyone.

Also Filed Under: Home: Culture: Politics: Open for Business Endorses Somebody, Nobody for President
Re: congressman’s newsletter scandal

Please do more research to this alleged scandal, would you?

In my understanding this has been covered years ago, the quotes were taken out of context, and the article was written by a ghostwriter. Dr Paul, while disagreeing with the quotes took 'moral responsibility' for them.

Also please see who else already endorsed him on his campaign webpage, http://RonPaul2008.com/endorsements

If you do not consider Ron Paul as a viable candidate based solely on the so-called “scandal” of such insignificant newsletters, then you have been taken like a helpless fly by those who have spun the web.

I also wanted to add, check out Ron Paul's Prescription for Prosperity at http://www.ronpaul2008.com/prosperity

Then tell us, does anyone else has anything comparable?

Your colleague Ed Hurst sounds not so much like a contrarian as a libertarian. Ron Paul is not campaigning as an extreme libertarian - indeed, his Economic Revitalization Plan [http://www.ronpaul2008.com/prosperity] is actually a quite respectable business-oriented document - the extreme libertarian platform can be summed up as:

1. We call for the abolition of almost everything.
2. We call for drastic reductions in the size and cost of everything else.
3. We refuse to be taxed to pay for what's left.

I agree Ron Paul is better by far than the rest of the field. I do not agree it's worth the time, money and effort to fix something so badly broken it can only be removed.

This process the reception of Roman law took place in Italy and then in the rest of continental Europe. It’s definitely an important st