The Sorrows of Modern Education

In a recently published piece, Linda Taylor addresses a favorite hate of mine, group learning. First, let's establish that a great many things we learn can and should be done in a peer group setting. That is generally limited to non-intellectual learning, such as sports, vocational training, etc. It is the worst possible setting for individual advancement intellectually.

However, when I was involved in public education, I found team learning was about the only way I could satisfy the demands made by the paganized philosophical foundation of public education. We have everything in the educational world fighting the idea man must come to God and learn to face Him on His terms. It assumes there is no God, and man must face all things himself. Since it is not the individual before God, the role of education is not to make men fit servants of the Lord, but servants of the State. The State is the false god, and servants of the State must learn to work as teams, as a community, to provide the veneer of "it's for our good."

This is the underlying foundation of modern public education. You can research it most quickly by reading anything written by John Taylor Gatto (Google is your friend). What keeps teachers from seeing this are the layers of obscurity between the actual plans and the "carefully researched" pedagogy methods for education in government run child-warehouses. All those private foundations which fund such research insist the work all be done in only those projects which yield the findings they want. Thus, I was taught to grade the class as a whole, and to see their raw scores as my own grade. We can't let any fail, you know -- never mind they don't know what they really need to know.

So assigning them into small groups is the best way to satisfy the educational objectives. Note the phrase "educational objectives" itself slants things away from actual intellectual development. The kids have to produce a measurable performance, which includes saying with their mouths the proper attitudinal assent to equalitarian philosophy. It is lip-service only when educators talk about personal development. What they mean is will the kids act like they are part of the group. If not, there is something wrong with them. The State loves and demands uniformity throughout. Thus, much as I hated it, I found the only way to achieve said goals was to use groups and peer learning. The outcome was pretty much what the State demanded. 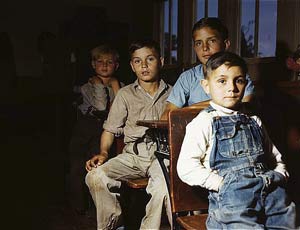 Had I pushed them individually to intellectual growth, I would not have been able to produce documentation to show whether I was an effective teacher. Kids who excel in understanding things would have inevitably been at war with the system, because they would recognize how wrong it was. How do we measure the changes which affect the whole life of a human? We recognize it, but can't quantify it, except in small bits and pieces. Public education makes those small bits and pieces, those snapshots of behavior, the whole goal. Humans are born unable to learn all at the same speed. Governments hate the variabilities of individuals with individual needs. Better to make them all equally stupid, because it is cheaper than having to vary policy to meet unique individual needs.

Let me say it again, more bluntly: Church, the fundamental nature of public education is at war with Christ. You cannot claim to obey God while letting the State shape your children. The result is a conformist slave without any internal resources, particularly original thought. The only proper basis for communitarian unity is a common Lord. Nor can you claim to obey God when their whole intellectual life is purely classical Western rationalism, which is still man-centered. That makes the individual a virtuoso, a self-god, one who must take on the whole world and win by their superior abilities. It is not man against the world; it is the world against Christ.

Ed Hurst is Associate Editor of Open for Business.

Also Filed Under: Home: Culture: The Sorrows of Modern Education