A Suite Year with Adobe CS 2

At first glance, one might think there are a lot of marks against Adobe’s Creative Suite. It is pricey, complex and essentially without much in the way of competition to spur development. That is exactly what I thought for a long time, but actually using the suite dispels the notions one might accumulate just from outside analysis. As Creative Suite 3 looms on the horizon, it is worth considering exactly what makes this suite so delightful.

About a year ago, Adobe sent Open for Business an evaluation copy of Creative Suite 2. After doing a small series of review articles about my experiences using the products, I realized just how dependent I had become on them. In just a matter of a few months, I no longer wanted to go back to the Gimp or my old stomping grounds of Corel products.

A year later, there is no way I would go back. Period. This point is not a matter of merely want any longer: I simply can get more things done, and do them better with Creative Suite as a whole, and Photoshop CS2 in particular. Although I held off from Creative Suite for a long time because of price, I never stopped to consider my own time’s value – probably because I never appreciated how much time I was losing. While for free the Gimp is a steal for photo editing, and Microsoft Publisher is a cheaper alternative for desktop publishing they both lack many tools – little things, really – that make eye-popping designs take so much longer.

First, Adobe is the only company to offer a truly integrated suite. Now, perhaps Microsoft will seek to provide a unified package between its Microsoft Office products and the new Expressions suite – if it does, then there will be some real competition for Adobe. That said, it seems unlikely that Microsoft’s product will have a chance to take the spotlight for a while still. Corel, while offering a decent suite, has never had interface design as its strong suite. And, as far as the Gimp goes, since it does not adhere to the GNOME interface design guidelines, it lacks any sense of integration with possible Free and Open Source contenders for other components of a complete design suite.

Adobe wins here clearly, because one can jump from Photoshop to InDesign to Illustrator and never need to learn a new interface – there are differences based on the different purposes of the tools, but not huge ones. For example, for most of the time I reviewed the products, I spent my time in Photoshop, InDesign and Acrobat. When I finally came around to Illustrator, I was able to load it for the very first time and create a very decent vector image with very little fuss. My experience in vector imaging tools was virtually non-existant, but thanks to a layout that acted mostly like the other Creative Suite applications, I felt right at home immediately.

Second, Image Ready makes working with graphics for the web a breeze. The integrated Image Ready optimization tool in Photoshop is almost always adequate for saving documents, and thanks to its separation from the standard save function, it is possible to keep saving a native Photoshop document and optimized versions of an image without constantly switching folders, file names and undoing lossy optimizations before resaving. Moreover, when the job demands more detailed optimization, the full Image Ready integrates beautifully with Photoshop to the extent one almost misses the transition. Image Ready’s layout is sensible, makes testing out and comparing different optimizations fast, and generally accomplishes a very respectable amount of space savings for the user. 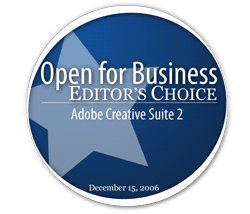 Third, Photoshop’s real time effects, such as the drop shadow function, are also big time savers. While adding a shadow, or an outline, or a glow, or any number of other effects (or combinations thereof) are tasks that can be accomplished using feathered masks and other handy little tricks, such does not create something that remains up-to-date if you change the object that has the effect applied to it. Conversely, using this little feature in Photoshop’s layer palette creates effects that automatically are altered when their parent object changes, and can also be modified if one wants to adjust the effect itself.

While these three points are hardly an exhaustive list – they only scratch the surface of Creative Suite’s abilities – they are the kinds of features that make the suite incredibly attractive to those developing creative projects; this is not true only for creative media professionals, but also those such as myself whose primary focus is elsewhere but nevertheless need to do some work in creative areas.

Adobe’s suite is not that complicated compared to other tools for the job, and while competition may be mostly limited to the Free Software Gimp and the Windows-only Corel Draw suite, Corel Paint Shop Pro and the new Microsoft Expressions Suite, it does not seem to be worse off for that – it has an unmatchable feature set placed against a backdrop of an interface that actually seems to have been thought out by people who understand the creative worker’s needs. In other words, there is a learning curve, but a shorter one than other tools I have used. Is it expensive? Yes, it is still expensive, but the initial expense is easily made up for by the time that will be saved thanks to the smart interface choices in the products.

Timothy R. Butler is Editor-in-Chief of Open for Business. You can reach him at tbutler@ofb.biz.

Re: A Suite Year with Adobe CS 2

You are totally ignoring Digikam and Krita. I’d suggest you check them up, specially digikam’s 0.9.0 RC2.